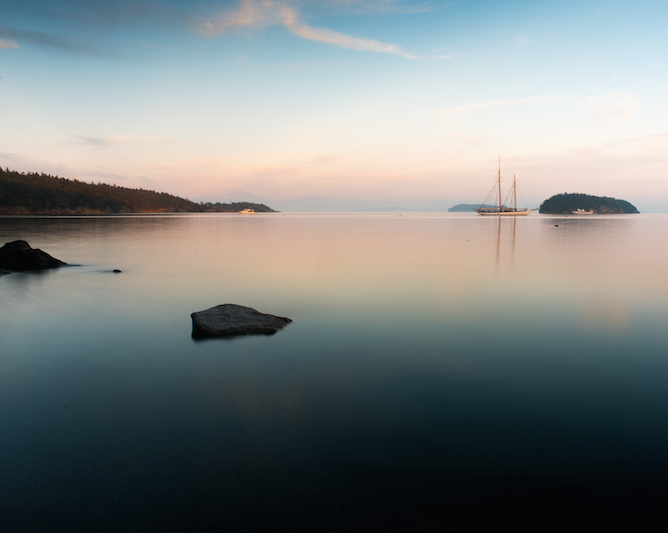 Sailing on the Schooner Zodiac

By Ian Ferguson
Photos by Chad A. White

When you cross the gangplank onto the Schooner Zodiac, a 160-foot sailboat based in Bellingham Bay, the first thing you notice is the size of the ship. The mast is as big as a mature Douglas fir, and happens to be made out of one. You could play a game of floor hockey on the deck, and you’d be winded after a breakaway.

The next thing you notice is the crew. A mix of volunteers and paid employees, they come from all walks of life but share a wise, salty vibe. They exude competence, but instead of being intimidating, they are welcoming and friendly.

My girlfriend and I boarded the Zodiac for a three-day cruise around the San Juan Islands in August 2014. The ship is a two-masted, classic wooden yacht that was built in East Boothbay, Maine in 1924 and worked as a pilot boat in San Francisco. She now operates as a charter ship, giving passengers the opportunity to sail on an historic 90-year-old wooden sailboat around the San Juan Islands, Canadian Gulf Islands and Desolation Sound. With 7,000 square feet of canvas, she boasts the largest working mainsail on the west coast. 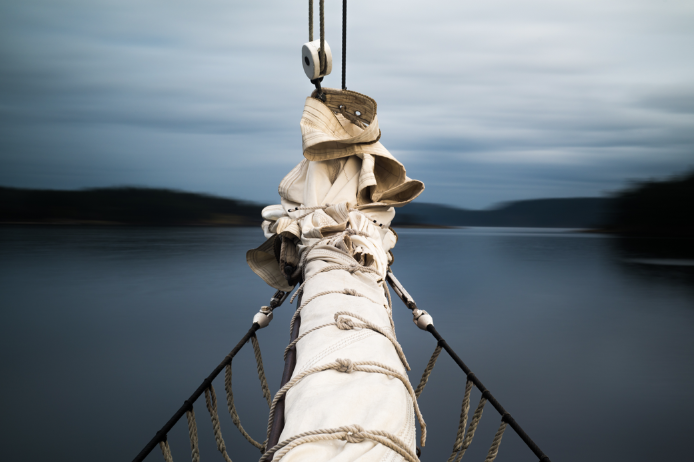 As we went below deck to stow our things, we noticed the intricate woodwork and brass hardware. Raised edges on all flat surfaces keep things from flying off when the ship heels; portraits of old sailors are firmly attached to the walls and comfortable nooks for eating, reading and sleeping give the impression of a stately mansion rather than a sailboat. I had to remind myself that we were floating on the Salish Sea.

Back on deck, the crew was making ready to head out. Soon after the boat left the dock, passengers were invited to help sail the ship by manning a number of stations on a rotating schedule. There’s a lookout at the bow, a navigator in the chart house, a messenger in the stern and of course someone at the helm, steering the behemoth boat with a big wooden wheel. No one was obligated to take part, but no one wanted to miss out on the unique opportunity to help operate a giant sailboat.

As we cruised on engine power towards Lummi Island, a school of harbor porpoises appeared off the starboard side of the ship, repeatedly breaking the surface like sewing needles stitching ocean to atmosphere. They followed along parallel to the ship for 20 minutes and then veered off, their ripples fading into the distance.

After we passed Lummi Island, the wind was strong enough to raise sail. Brian, a barefooted guy with tattoos and long brown hair, directed two teams pulling in rhythm on two wrist-sized halyards to raise the massive gaff rig and mainsail. Even with the mechanical advantage of a block-and-tackle and six people pulling, my muscles burned with the unfamiliar labor. Not wanting to burden my team, I pulled hard and didn’t quit, and by the time Brian mercifully called a halt I felt semi-nauseous. I vowed to pace myself next time.

Sails raised, first mate Sam directed the passenger at the helm to catch the wind, and the entire mighty ship leaned over. Wake streamed out behind as we picked up speed, and the speedometer climbed to 12 knots. The power of the ship under sail was impressive to behold.

Halfway between Lummi and Sucia islands, Diane at the bow shouted that she’d seen a whale. Captain Tim grabbed the wheel and turned the boat around, and everyone on board broke out cameras and iPhones. Chad, a professor of photography who had been invited aboard to give a photography lesson to the passengers, seized the opportunity to teach, and with his guidance I captured the moment just before the gray whale’s tailfin dipped below the surface. 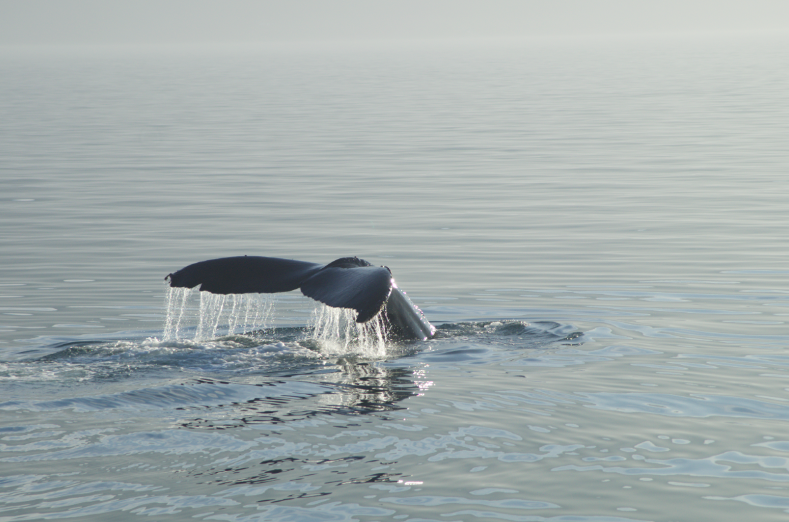 The first day of sailing flew by, and soon we were anchored in Echo Bay off Sucia Island. Dana, an intelligent young woman with glasses and long blond hair, motored the passengers ashore in a rubber tender. Chad led the group in search of sunset photos, and we spent an hour clicking away. Madrona trees bathed in orange light leaned over sandstone cliffs, and the setting sun silhouetted a few sailboats offshore. It looked like a postcard in every direction.

Joann, the ship’s cook and most important person, had a burrito buffet dinner waiting for us when we returned to the Zodiac. Pleasant conversation over dinner wound into the evening’s photography lesson with a projector screen in the stateroom, and more pleasant conversation and drinks wound into a gradual bedtime as the passengers, one by one, climbed into their cozy bunks and drew the curtains.

We went up on deck to take in the bright stars and the soft sea breeze, and then went to bed completely relaxed. We did it all over again three more times with different destinations, foods, wildlife and conversations each day. We drank beers in the charming fishing village of Roche Harbor, saw imported exotic herd animals on Spieden Island, explored a lighthouse on Stuart Island and had a cookout in Parks Bay on Lopez Island. 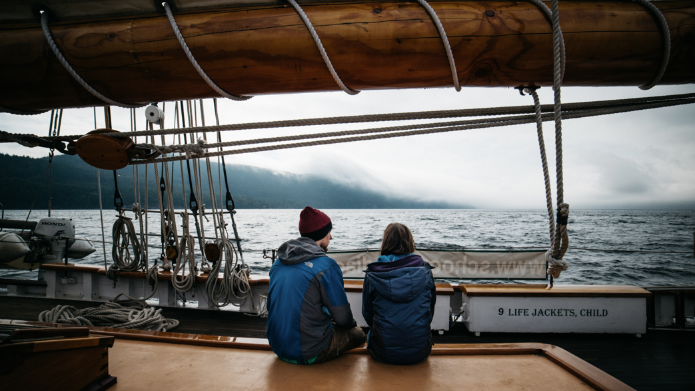 The Schooner Zodiac is a powerful piece of living history, and its effect is hard to describe. The words time machine come to mind, but I doubt there was an era as idyllic and relaxing as a charter cruise aboard the Zodiac. When our journey ended back in Bellingham I felt rejuvenated but reluctant to face things like traffic and computer screens. I knew we’d be back aboard the Zodiac someday.   x