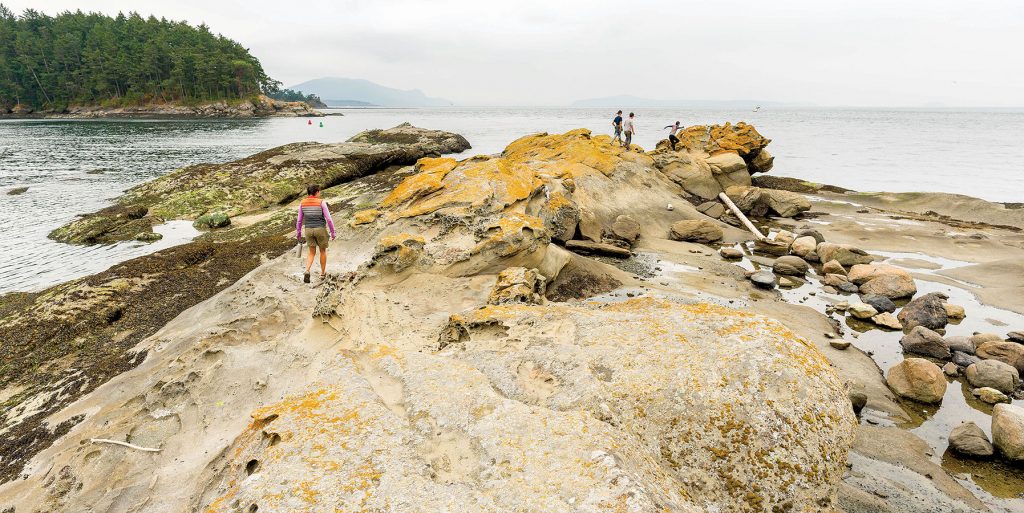 Nosing our way to the beach on Clark Island, I focused on the water, looking for rocks and trying to pick a clear path. Suddenly the cry of “Orca!” came from our friends’ boat, their children excitedly pointing to the channel between Clark and Barnes islands. I turned and looked just in time to see two tall dark fins slice the water. The orcas appeared to be chasing unseen prey up against the craggy shore of Barnes Island, just a few hundred yards away. Keeping our distance (200 yards, and out of their path, per NOAA regulations), we slowly followed astern for a few minutes, quietly admiring the graceful orcas as they disappeared towards Sucia Island, a few miles to the west. There was not another boat or person in sight for miles – this was different from the San Juan Island experience I’m used to.

Our trip began four days earlier when we (me,  my wife and two young boys) launched our borrowed 16-foot boat with an outboard motor at Washington Park at the west end of Anacortes. I think many assume that exploring the small islands of the San Juans requires either a large boat or a kayak, but for this trip, the 16-foot motorboat was ideal.

We were bound for Jones Island Marine State Park, a 188-acre island close to the southwest side of Orcas, about 20 nautical miles from the ramp. With 128 feet of dock (meaning tides, current and waves are no worry), 24 primitive campsites and four miles of better-than-expected hiking trails, it was a perfect base to explore the San Juans for a week with friends. 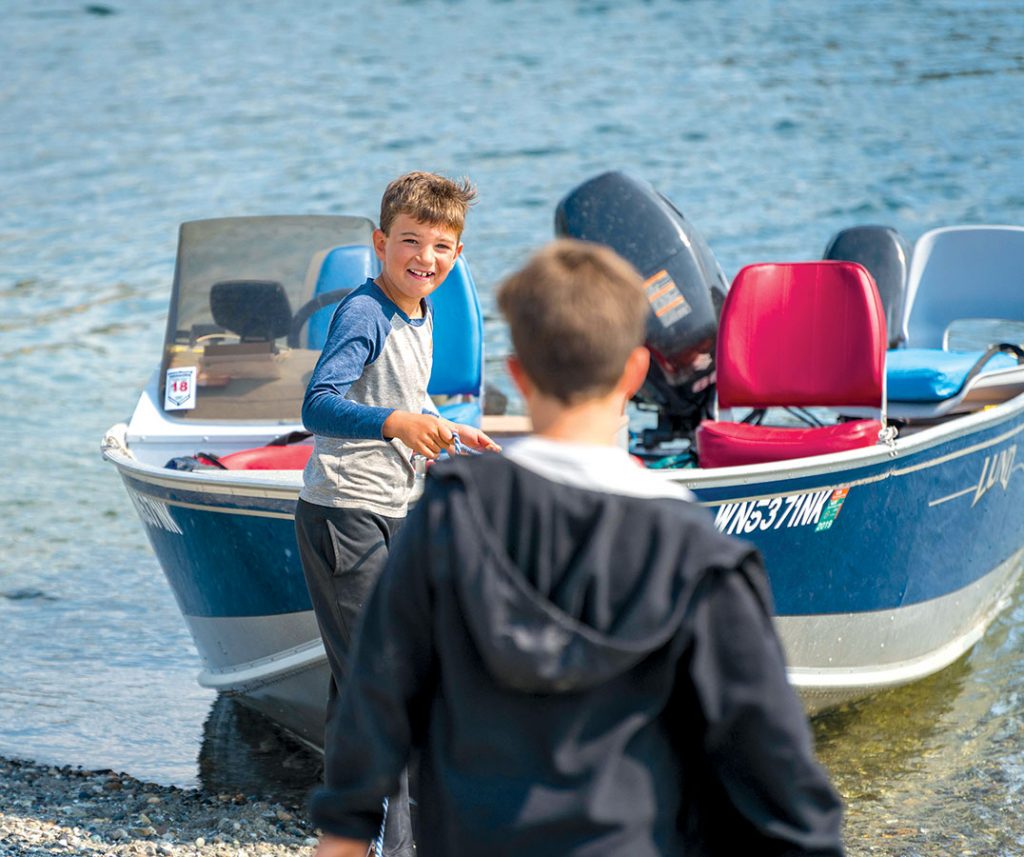 Every day brought a new adventure to our little flotilla – whether hiking deserted trails on Sucia, swimming in the pool at Roche Harbor, eating immodest ice cream cones at the Orcas ferry dock, SUP crabbing on Jones Island, exploring the settler history of the islands on Stuart Island, perfect beach walking on Clark Island or any number of other adventures on the 10 islands we visited. Many evenings closed with a short walk from camp to watch the sunset, followed by a campfire, s’mores and stars. It was an idyllic and inexpensive summer vacation.

We’ve spent months car camping over the years but had never camped by boat in Puget Sound. While the gear isn’t much different, boat camping does require a bit of additional planning. Not surprisingly, first you need a boat that can safely haul your party and gear across many miles of often choppy and always frigid saltwater. Sixteen feet and 40 horsepower is probably about the minimum for what a family of four can consider safe and fun.

Second, Washington state requires all boaters piloting a boat with 15 horsepower or more to have a boater safety card. All boaters must also have on board at all times life jackets for everyone (kids must be wearing them), flares, a fire extinguisher, horn/whistle/bell, throwable personal flotation device, boat registration and navigation lights, in addition to having a carbon monoxide warning sticker and their registration numbers/decals displayed. A marine radio is also a good idea in case of emergencies, although there is sometimes cell service.

This may all seem like a bit much, but you have a high chance of being boarded by the U.S. Coast Guard, Washington Department of Fish and Wildlife, or the San Juan Sheriff’s Office during your trip (we were). Plus, the regulations are really in your best interest, since the weather in the San Juans changes fast, the water is cold and help is sometimes hours away.

But the preparation is worth it – even for those who have taken dozens of ferry trips to the San Juans, camping on island marine state parks and traveling by small boat reveals an entirely different side of these famous isles. You’ll immediately notice the lack of tourists, even in summer, and feel your blood pressure drop since you don’t have to obsessively check your watch to ensure you make your ferry. As you explore the islands that aren’t on the ferry routes, you’ll see the San Juans as they were: full of quirky locals with deep ties to the land, sleepy roads and paths, overgrown fields and roadside stands selling one-of-a-kind island mementos on the honor system.

Jones is actually one of 11 Washington Marine State Parks in the San Juans that offers camping, so it’s not the only option for a base camp. Some have docks, others don’t, but none take advance moorage or camping reservations. This allows campers the flexibility to move from island to island every few days and provides options in case your preferred spot is full. During the busy summer months, Friday and Saturday fill up at places like Jones, but we didn’t have a problem securing one of the coveted beachfront spots on a Sunday night in August. So next time you are looking for an exotic camping trip close to home, grab a boat and point it toward the San Juans.