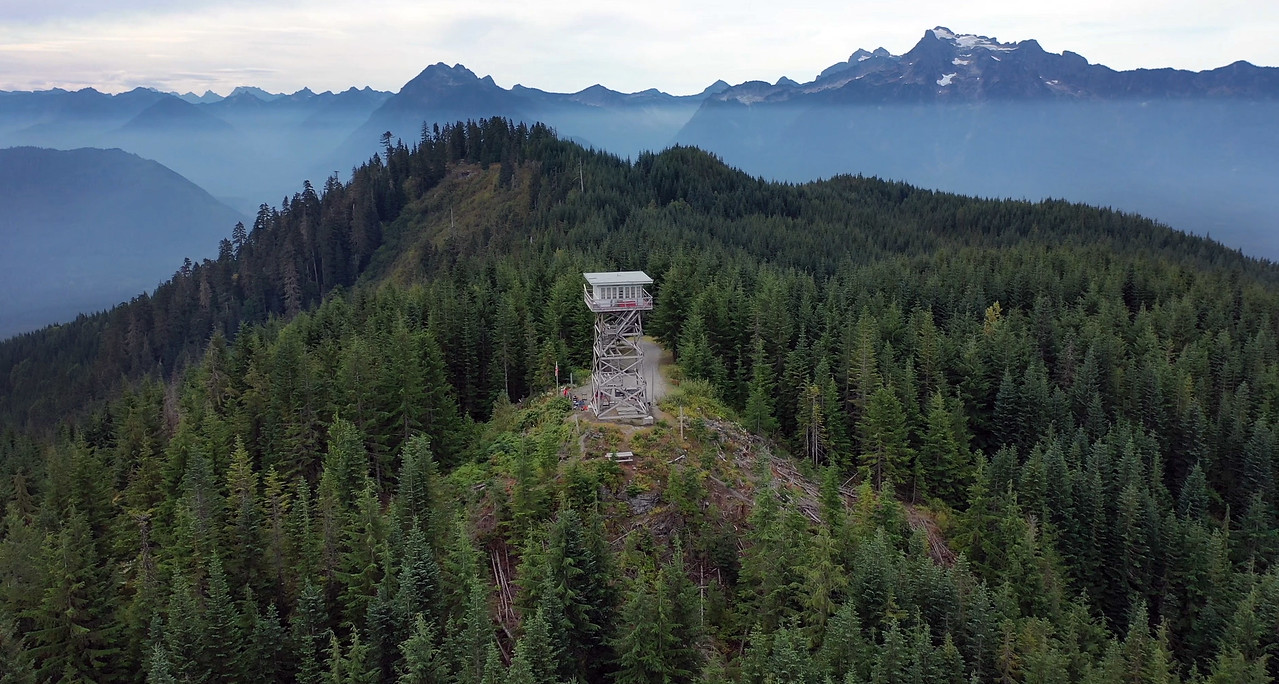 The Great Fire of 1910 incinerated over 3 million acres of timberlands spanning Washington, Idaho and Montana, consuming entire towns in its path and killing 87 people. The historic firestorm inspired a new approach to safeguard our timbered lands and resulted in the design and construction of the U.S. Forest Service fire lookouts, a legacy that would last for generations and become a love affair for many.

The first fire lookout in northwest Washington was built on Gold Mountain in 1915. Located just east of Darrington, it changed the history of fire lookouts; lookout post Roland Atchson detected smoke off in the distance, a place that will be forever known as Fire Creek since this event. Crews arrived quickly at the scene and worked to starve the fire of fuel before its voracious appetite would turn it wild and unstoppable. Though many acres of forested land were lost, early detection saved countless acres. The U.S. Forest Service, witnessing the success of the Fire Creek fire, commissioned the ongoing building of fire lookouts across the country. 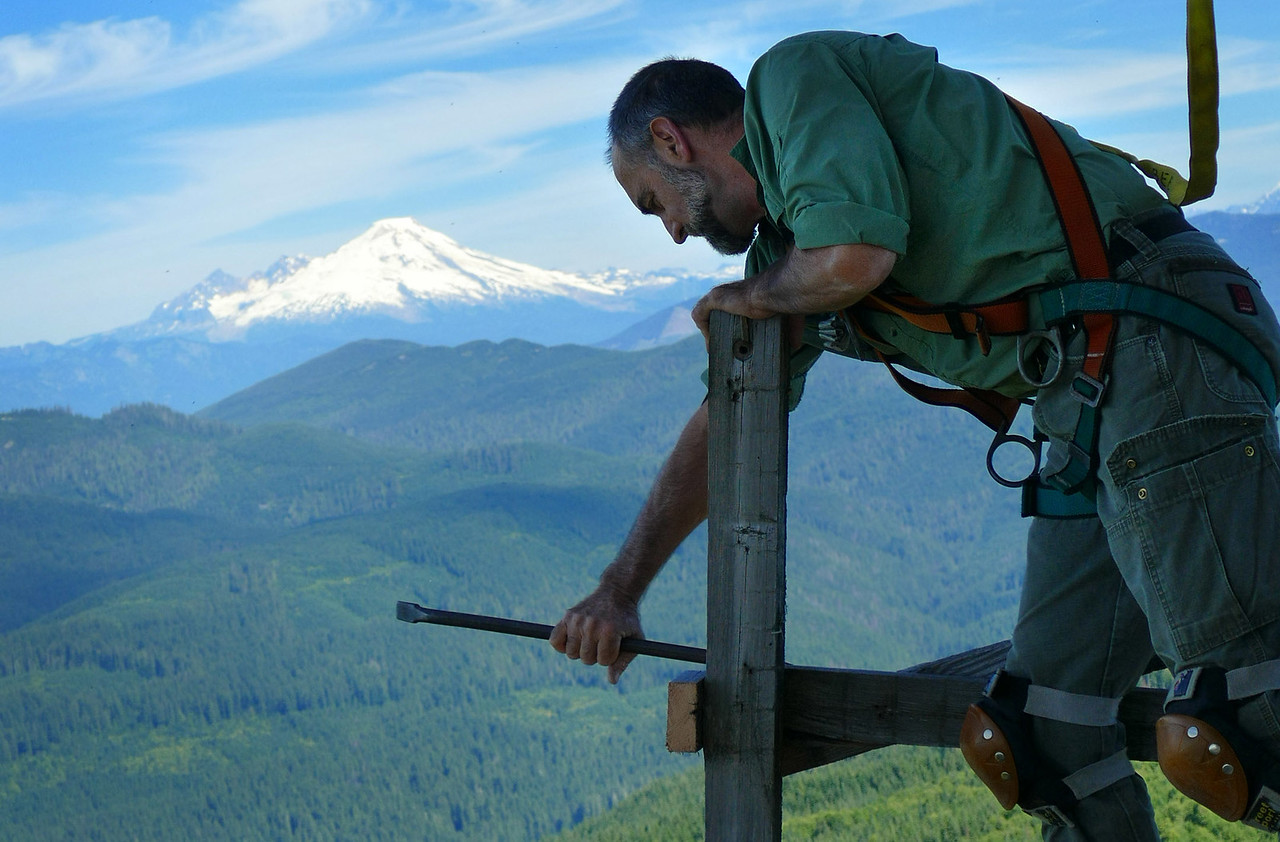 For decades, fire lookouts were being built on the high mountain peaks and lower elevations to see under cloud cover. During evening hours, one could detect the faint flicker of lamplights far off in the distance as the solitary lookout kept watch day and night, with far-reaching views that others seldom see.

North Mountain Lookout was built in 1965 on a 41-foot tower, perched on the 3,824-foot North Mountain summit ridge, above the town of Darrington. The U.S. Forest Service, Region 6 introduced the R-6 “flat cab,” a live-in wooden structure, in 1953.

The 26 windows offer spectacular views including the two volcanic peaks of Mt. Baker and Glacier Peak as well as the entirety of North Cascades National Park. One can see vast stretches of Mt. Baker-Snoqualmie National Forest and glimpses of what lies beyond Whitehorse Mountain in the Boulder Creek Wilderness and west to the Salish Sea and Olympic Mountains. At dusk, Mt. Higgins cradles the last glimpse of the setting sun. Over the years, those who staffed the lookout cherished these views as the sun cast colors in the morning and painted the sky at night.

In the 1990s the lookout was abandoned and sat alone on the mountain, falling prey to vandalism as the structure slowly succumbed to the elements due to lack of maintenance. A tough decision had to be made about a lookout that was no longer needed and posing liability issues for the forest service. In 2009, discussions began about tearing down the lookout. Due to the lack of funding, the demolition never happened, and the lookout remained abandoned on its mountain.

At one time, Washington had 656 lookouts, now only 93 remain. Most of these lookouts collapsed, burned or were torn down. North Mountain Lookout looked headed for the same fate.

In March 2013, two guest speakers were asked to attend a Darrington Strong meeting to discuss the plight of town’s historic landmark. With no road map set in place that night on how to save it, but a powerful dream and vision, the Friends of North Mountain group was formed, and the eight-year journey to restore the lookout began.

News about the project spread, and Richard Albright, who staffed the lookout during the summer of 1966, its first year in operation, took notice. Albright’s stories, photographs and enthusiasm infused the project with a sense of history and a first-hand experience of life in a fire lookout.

The group held meetings, consulted engineers, reviewed plans, prepared legal documents and scheduled work parties. Two-dozen organizations and 100 volunteers joined together to make the dream become a reality. The lookout was rebuilt from the ground, up. 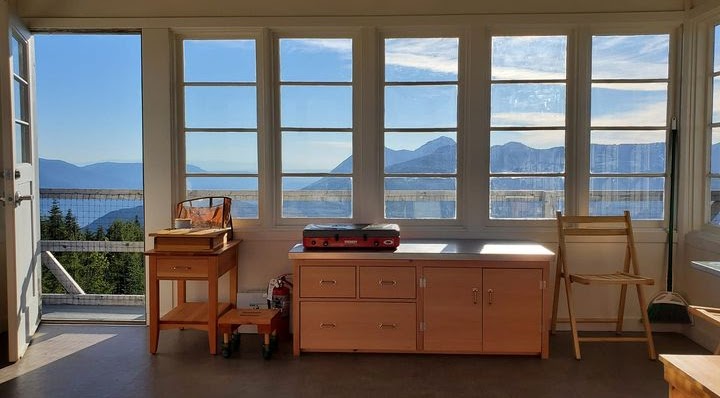 The concrete piers had deteriorated and were replaced. New shear-bracing was installed on the tower support structure with lumber donated from local millers. Well-seasoned climbers, secured by ropes and safety harnesses, worked together in a seemingly effortless dance to take the “sway” out of the tower before crews could work on the roof and cabin interior. A new, shallow-pitched roof and lightning arrestor system was installed. The deck, handrails, cabin floor and windows were donated from another R-6 lookout that was demolished in years prior. New shutters were fabricated, and the cumbersome deck hatch was replaced with a welded-steel, counterbalanced design. Local craftsmen constructed furniture from original forest service supplied plans. This included a queen-sized bed, desk, bookshelves and even an insulated stool to perch on during electrical storms.

Today, the North Mountain Lookout remains fully restored to its original condition and within easy driving distance from the town of Darrington. It was more than a lookout atop its mountain; it became the story of a community sharing a dream to make something wonderful happen.

It still offers the same magnificent 360-degree views that Albright first saw back in 1966. Standing on the deck, perched above the treetops, and gazing out over the surrounding beauty, one can experience what motivated those with a common vision as you travel back in time through the legacy that lookouts left behind, sentinels on their respective peaks, safeguarding our precious timber lands.

For information on the lookout and its rental operations, visit sites.google.com/site/northmtlookout.   x

“Wow, just wow. I don’t even know where to start, this place is incredible! Worth every penny. I was thrilled to snag a spot! Definitely want to come again, I’ll be looking constantly to find cancellations! … The view is astonishing. Honestly, I’m not sure what I was expecting but this was way better. … I almost wish this place wasn’t so popular!”    – Pam

“Thank you for making one of my wife’s bucket list items come true. She grew up in Darrington and this just made her decade. … The sunset was spectacular, the views are just nothing short of amazing.”    – Stacy

“Awesome experience and easy and prompt communication. Everything was as described. Thank you all for making this lookout happen!”   – Esther

“Thank you so much for making this opportunity available. A fire lookout is such a unique stay and this was truly an amazing experience. … This was a 10/10 stay and the coolest experience!“    – Kirsten