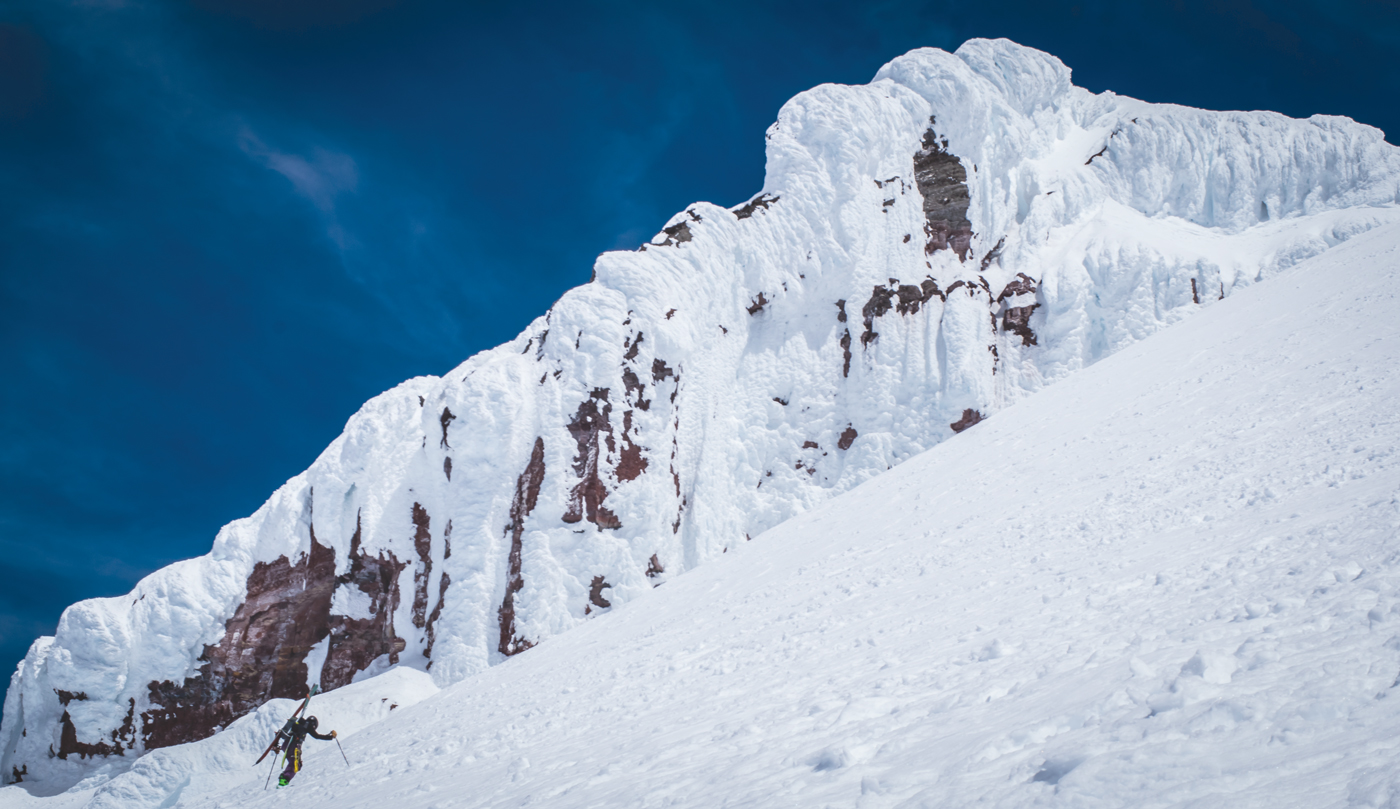 A few turns off the summit, the author stopped to wait for his partner. The pair never found out what went wrong.

A knot twisted in my stomach as I crouched, dumbfounded and alone, on Mt. Baker’s Coleman Saddle.

In the case that my shouting across the glacier wasn’t futile already, an updrafting breeze made it certain. Putting the thought, ‘How could this have happened?’ out of my mind, I thought through possibilities, probabilities and my options. I drew in steady, purposeful breaths, blocking the worst-case scenario tremors from my mind. I had to find Joe.

This was our first attempt at Mt. Baker’s summit and up to this point the stars had aligned for our effort. A mid-May high-pressure ridge guarded the North Cascades from malicious weather, and crevasses along the Coleman-Deming route were reportedly only just awakening from winter hibernation.

Still, big mountains are frightening. Even during benign days mountains come armed with mystifying defenses and dangers. After we reached the summit and began our ski descent, at some point during the first few turns, my touring partner and I separated. To this day, I don’t know exactly how we lost one another.

“Joe!” I yelled again, even louder.

Just three hours prior, Joe and I had eagerly climbed the final steep pitch of the route. Our timing couldn’t have been better for corn skiing; the warming snow had almost reached the sweet spot between solid ice and melted slop. Smiling, we powered upwards as the route’s bulletproof ice softened.

“Yeah, buddy!” I yipped at Joe between panting breaths, “almost on top of this beast!”

Joe moved in rhythmic bursts upwards. Sinking the curling metal spikes of his crampons into the steep wall, he let out the kind of expletive that mountain climbers know best – the kind that captures the painful joy in an upward push. 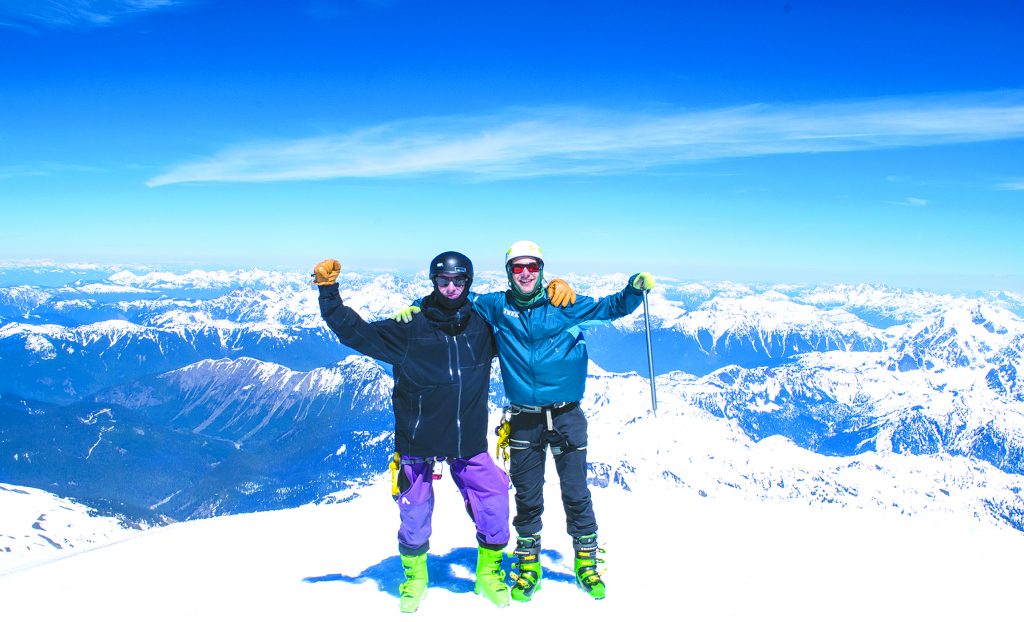 We reached Grant Peak, the true summit of Mt. Baker, at about the same time as the two other climbing parties we met that morning: a pair from Seattle and a couple from California’s Eastern Sierra enjoying a month-long tour of the Cascades. Exchanging high-fives and photos, we chatted about the morning’s work while taking in the sweeping world below.

Joe and I were the first to leave the summit, anxious to ski as much corn snow before its inevitable transformation to slush somewhere on the 7,000-foot descent. Rolling ice dunes separate the mountain’s highest point from the Roman Wall, where our ski descent would begin in earnest. I reached the headwall’s rollover and my body began pumping focus-inspiring adrenaline.

Joe reached me as I folded my skins into my pack. Restless for the descent, I rocked back and forth, waiting for Joe.

“I think we timed this just right,” I said, chatting to distract myself from my own impatience.

Joe finally began clicking into his skis. Like a dog unable to stay for a soaring Frisbee, I took that as my cue. Looking back at Joe I gave a hearty, “Yeehaw,” and shoved off downhill. I took four big, fast, GS turns – enough to settle my nerves.

I paused to wait for Joe about 100 feet below. I couldn’t see him above the rollover. I waited and waited, feeling anxious again, and now, frustrated. What is taking so long? I fumed inside my head.

Minutes later, the Seattle party began descending. I watched, silent and jealous, poking my ski pole at the softening snow.

“Joe, you good?” I yelled, doing my best to hide my frustration.

“The skiing’s fantastic!” I yelled again, hoping that might tap Joe’s sense of urgency. Still no response. I looked around at the world below me. Only a soft breeze interrupted the stillness. I began fidgeting as shivers of doubt crept into my mind.

The Californian couple – the day’s final summit party – now came into view. This time, I didn’t let them pass in silence. I yelled at the top of my lungs and waved my ski poles wildly.

“Everything all right?” Dan, the tanned Californian, asked.

“Well, I’ve been waiting here for awhile. Did you happen to see my partner Joe on top of the headwall?” I said.

They both shook their heads. I could read the skepticism in their expressions. My heart sank. What the hell?

“I took maybe four or five turns,” I said. “Joe was right behind me just above the rollover there.”

There was a chance Joe made for the Easton Glacier, a popular route descending toward Baker Lake. Maybe he is waiting, frustrated and growing anxious for some sight of me. Or maybe he is climbing back up towards our intended route, realizing his folly, I thought.

I worked to convince myself the next scenario was impossible. The Coleman Headwall – a steep, rarely traveled route riddled with deep crevasses – was closer to our transition point than the Easton. We made note on our ascent and again at the summit not to mistakenly descend the Coleman. Even so, doubt itched at my mind.

The last two options seemed strangest and yet most conceivable all the same. One – Joe somehow slipped by me down our intended route. Having witnessed both other parties making their descent, this seemed unlikely. Two – he remained just out of sight and earshot above, riddled with gear failure or injury. This too seemed unlikely. Joe almost certainly would have called for the two other parties as they passed.

Perplexed, we formulated a plan. The Californian’s would ski down to the Colfax Saddle. If Joe was waiting anywhere along our route it would be there. We exchanged phone numbers although we lacked service. Embarrassed and in disbelief, I waited at my perch just four turns and an hour later.

The Californians skied away and out-of-sight. I realized I may not be able to see them much less communicate with them as they descended further. The volcano’s tricky convex topography makes line-of-sight difficult to discern.

I decided to rendezvous with the Californians. We needed to settle on an exit strategy in case we, too, separated. What would have been effortless turns just an hour ago proved laborious in the melting snow. I caught up with the Californians and we continued on to the saddle — no sign of Joe.

The couple looked at me with a sense of apprehension. They wanted me to make a call, but I didn’t know what to do. I felt small; the way mountains make one feel when luck is running thin. I could tell they were ready to get off the mountain but didn’t want to leave me. We came up with a plan. Joe, we reasoned, was either stuck above us, re-ascending the Easton or he had mistakenly dropped down the Coleman Headwall.

“I think you have to climb back up,” Dan said. “If he’s up there you’ve found him and if he’s not you didn’t descend without checking.”

I nodded in agreement, and planned to update them as soon as I was back in phone service.

Nothing says it’s time to retreat from the alpine like a quickly warming snowpack. A wall of ice only a few hours ago, the Roman Headwall was beginning to shed curtains of wet glop. Biting my lip, I strapped my skins back to my skis and resolved to find my friend.

I made a steep zig-zagging path as the afternoon sun blazed. My skin felt salty and my throat dry with dehydration. I sought a better vantage over the Easton route as Baker’s conical form played tricks on me. Ever-renewing horizon lines formed just out of reach. I even thought I spotted the silhouette of a skier at a distant rock outcropping. I called for Joe, to no effect.

“Hales, listen, I somehow lost Joe on our descent,” I said firmly through a weak connection.

Reaching the headwall, I gulped the last of my water and prepared to descend. I felt numb, very alone and out of ideas. I made tired turns on slushy snow knowing the terrain would only grow increasingly cumbersome as I lost elevation.

I powered on my phone at the Colfax Saddle and was surprised to find a bar of service. Joe’s line went straight to voicemail, as did Dan’s. I decided to reach out to our Bellingham crew in the hopes that Joe had done the same.

“Hales, listen, I somehow lost Joe on our descent,” I said firmly through a weak connection.

Not wanting to issue a preemptive search and rescue call until I was certain that Joe was still on the mountain, I planned to descend the route and call again as soon as I could. Haleahy was to inform Joe’s partner to be on alert in case Joe called her. I anticipated reaching Maple Falls, and service, in three hours.

My legs whined as I skied through increasingly sloppy mush. I avoided steep rolls, crevasses and other troublesome terrain by sticking to the main climbing track. In the distance, I saw a party establishing camp and felt a glimmer of pep.

“Hi there,” I said, “any chance you’ve seen a skier with a black coat, purple ski pants and green boots?”

“Possibly,” one of the campers replied, “But I’m not sure.”

Another party had established camp a few hundred feet lower on the glacier and this time I received a more affirmative response. “Yeah, I think we did,” one person replied, “I do remember a solo skier.”

Joe should be the only solo skier descending from the summit. Feeling a renewed vigor, I double-timed for my parked truck still several miles below.

The toe of the glacier dips into the forested Heliotrope Ridge trail where Joe and I ditched our sneakers for ski boots a couple miles from the trailhead. Joe’s shoes were gone now. Howling with glee, I continued on foot.

Joe’s van was gone too, which cemented his safety in my mind. I drove the bumpy dirt road to Glacier where I spotted that recognizable blue van and a familiar face talking on the phone. I cracked my first smile in hours.

Not sure whether I wanted to slap him or hug him, I squealed into the parking lot. “What the hell happened up there, man?” I asked.

We blazed through our stories. Joe had indeed skied behind me down our intended route. Angry, he believed I was out-of-sight ahead of him.

“I was ticked you didn’t wait for me,” Joe said. “It wasn’t until I saw your shoes hanging in the tree that I knew something was terribly wrong.”

It had been a long day and I was suddenly exhausted, but the knot in my stomach finally untwisted. What went wrong? My impatience and hubris led to our separation, but ultimately poor communication did us in. We didn’t establish meeting points or an emergency plan.

Everyday spent in the mountains is a learning opportunity. A little impatience and four unnecessary turns proved the difference between a dream day and a nightmare. Good decision-making begins with effective communication. I won’t forget that lesson.