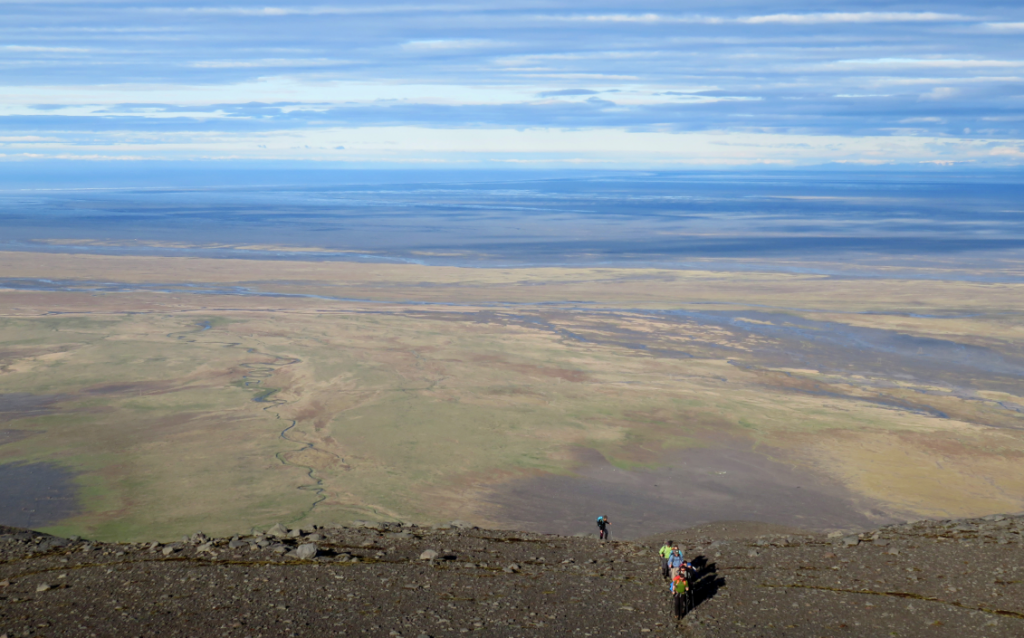 At 3 a.m., I peeled back the room-darkening shades to reveal the objective of our day: Hvannadalshnúkur (pronounced kvah-nuh-doll-shnooker, more or less), Iceland’s highest peak. From our hotel room, I did a quick scan of the hulking mountain, which stretched for many miles across the horizon. Clouds obscured the summit, but the weather looked stable, so I knew our climb would be on.

I was worried how my wife and I would do, though, because neither of us could get our jet-lagged minds to sleep for even a moment during the previous eight hours. Throughout the night, I kept trying to convince myself that the remaining hours, then minutes, would be enough rest. But time ran out on that frustrating exercise, and it was time to get up and eat our peanut butter and jelly sandwiches for breakfast.

Many times before, we had climbed big mountains with little sleep the night before, which is quite common in mountain climbing. But neither of us had attempted a big mountain without any sleep at all. I thought two days would be enough time to adjust to the seven-hour time change, especially after an easy, seven-hour direct flight from Vancouver, but apparently I was wrong.

On the previous day, we met our guide Védís of Icelandic Mountain Guides (IMG), and she briefed us about the climb. Even though Núkur, as it’s nicknamed, is not a technically difficult mountain, we decided to go guided for two reasons. First, we knew the local guides would have an intimate knowledge of the not-so-straightforward route, plus they would know the current snow and crevasse conditions, not to mention the local weather patterns. Second, we needed at least one other person for the roped portion of the climb.

The downside of going guided, however, is that your summit chances are dependent on the other people on your team. If one person can’t go on, everyone has to go back down.

At 5 a.m. the next morning we met Védís and the rest of our team. Kevin was from North Carolina and Pat was from Scotland. Another couple had backed out the day before after learning the grueling details of the climb. 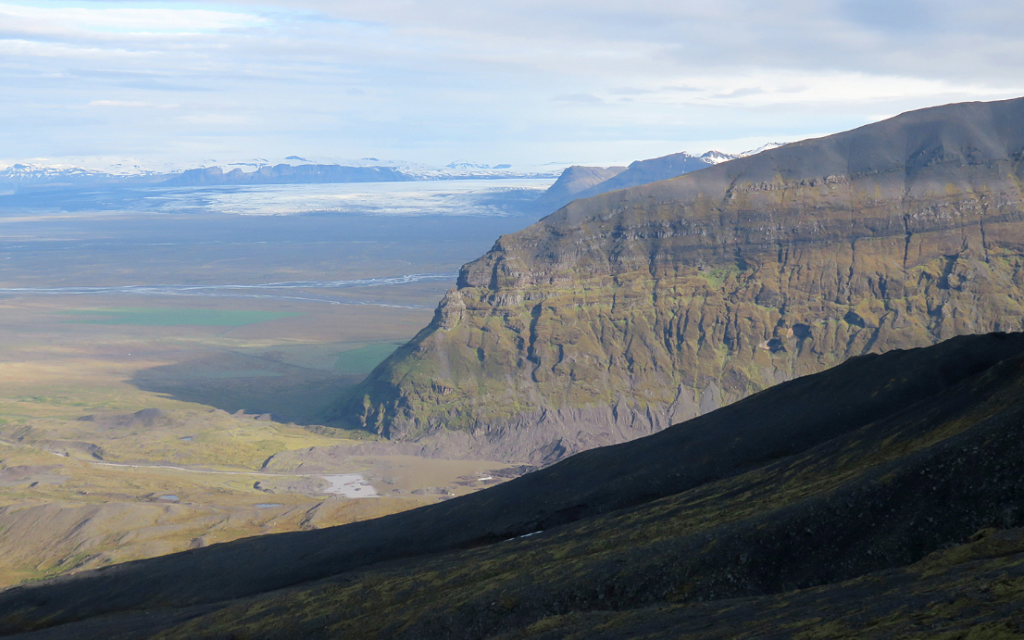 An IMG guide who had climbed the mountain on the previous day reported abnormally soft snow, so he recommended we bring snowshoes. I overheard the dreaded word, and I could already feel the extra weight bearing down on my soul. Whether they were on my back or my feet, I knew snowshoes would make the 14-mile round trip much more difficult.

In the perpetual light of June, and at a latitude equal to Fairbanks, Alaska, we started up the steep and rocky trail. Kevin and Pat started out fast, so there was no easing into the day.

Hvannadalshnúkur only reaches 6,923 feet (2,110 meters) into the North Atlantic sky, but the trailhead is not far above sea level, so you pretty much climb the entire mountain. A few thousand feet above sea level, we finally reached the snow line. The angle of the slope was gentle yet relentless. The sea of white was only broken by patches of black lava rock, just like the “north of The Wall” in the HBO show, “Game of Thrones,” much of which was filmed in Iceland.

As we climbed, the snow became deeper and softer, and it had a consistency somewhere between a snow cone and a Slurpee. When we hit the toe of the glacier, we roped up and donned our snowshoes. I was glad to have the weight off my back, but now my feet weren’t so happy. With each step, slushy snow accumulated on the tops of my snowshoes, adding even more weight to lug up the mountain.

On the bright side, the weather appeared to be holding, the scenery was incredible, I was actually feeling pretty good and I finally got my stepping and breathing into a delightful alignment. But then Kevin had to stop for one break after another, and my flow was continually broken. It was clear his fast pace at the beginning of the hike was catching up with him. I became concerned that we might not make it to the top.

Pain and suffering for long periods of time is actually a big part of mountain climbing. When new climbers realize this, they either quit climbing or they accept the price of admission to this amazing activity. Assuming you’re not endangering yourself or others by pushing yourself too hard, the pain is just temporary. Memories of experiences like this, however, last a lifetime.

I’m not going to sugarcoat things, though. This was a brutal climb. Beyond its long distance, major elevation gain and challenging snow conditions, temperatures swung wildly throughout the day from sweltering heat to stinging cold.

When we finally reached the base of the last pitch to the summit, we swapped our trekking poles and snowshoes for ice axes and crampons. I felt much more at home with this setup. 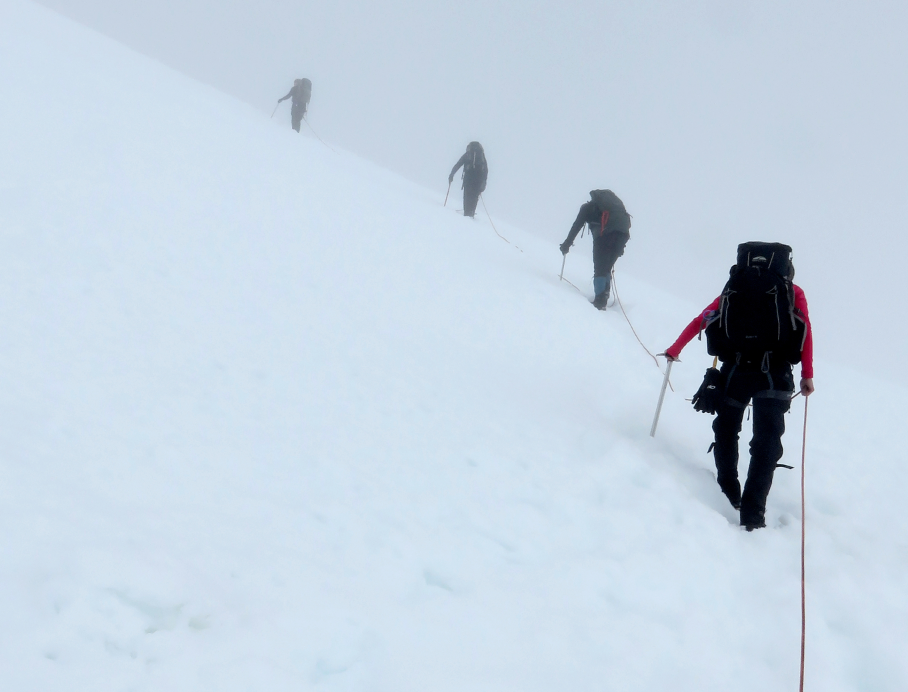 As we slowly made our way up the steep slope, Kevin repeatedly stopped, hunched over and stood in silence. Once again, I thought our climb was over, but this time we were just hundreds of feet from the top. Fortunately, he continued to move, albeit at a crawl’s pace. Meanwhile, a thick fog swarmed around us, significantly reducing visibility and blanketing us with cold, damp air.

Kevin didn’t say much, but when I heard him blurt out some sort of four-letter word, I knew something wasn’t right. When I looked up from the back of the rope team, I could only see his upper half. He had fallen into a crevasse up to his waist. I anchored my axe and waited for him to wrench himself free, but he wasn’t able to pry his leg out. Védís ended up having to backtrack
and dig him out with a shovel.

Just over 5 feet tall, Védís was young, thoughtful and soft spoken, but those traits belied her physical toughness and pragmatic, cool-and-collected attitude. I felt lucky to have her on our team.

After about seven hours of slogging – and taking more breaks than I’d prefer – we reached the top of Iceland. A stubborn cloud blocked our views, but none of us seemed to mind much.

Hvannadalshnúkur sits on the northwest crater rim of Öræfajökull, Iceland’s largest active volcano. Even though Öræfajökull is a massive mountain, it is only a small part of Vatnajökull, which is the largest glacial ice cap in Europe by volume (it averages 1,300 feet thick) and the second-largest ice cap in Europe by area (with 3,100 square miles of ice). Vatnajökull is so large it makes up 12 percent of Iceland’s surface area.

That endless ice cap would have been a nice sight to see, but I felt fortunate just to have made it to the top. With the weather rapidly turning for the worse, we didn’t spend much time up there. I had just enough time to perform my summit ritual (kiss my wife) and then snap a few photos.

On our descent, Védís told us that Öræfajökull’s 1362 eruption was the most violent and explosive volcanic eruption in Iceland’s recorded history. This gave my sleep-deprived mind something to ruminate on during our five-hour descent. At one point, we experienced near whiteout conditions. The blowing snow was hypnotic, and my tired mind seemed to drift with it. But then I’d hear some thunderous cracks from nearby icefall, and my mind would jolt back to reality once again.

By the time we made it back to the trailhead, I was wearing a T-shirt under a hot sun.

Back at our hotel near Skaftafell, my wife and I forced down some fish and chips and a couple of beers, and then crashed hard. I think I slept with a smile on my face the entire night.   x