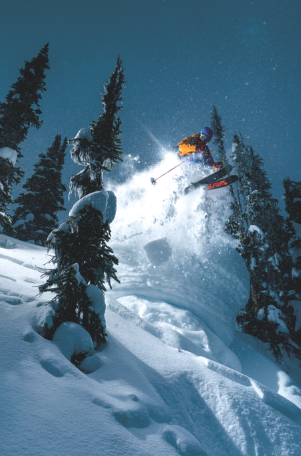 Based in Vernon, B.C., Skevik has been handcrafting incredibly nice skis since 2008, when brothers Glenn and Gregg Anderson launched the business out of their parents’ garage with help from the Faculty of Engineering at University of Victoria.

It’s still a young company with only three employees, but Skevik is already light years ahead of many of its competitors in terms of ski design. A handmade approach, top-tier materials and the powder-skiing credibility that comes from growing up on the slopes of Silver Star Mountain in the Okanagan gives them a definite edge.

All of Skevik’s cores are maple, a durable, rugged hardwood that is both abundant in and a symbol of Canada. The uncovered sidewalls are coated with a linseed oil/mineral spirit mixture, which the Andersons borrowed from a surfboard builder. The finish leaves the grain of the maple cores exposed. It’s a decidedly old school approach that makes the skis unique, and it’s still holding up nicely on six-year-old models.

“We wanted to keep it simple and maintain a beautiful look. It definitely stands out in the lift lines. Our customers have been happy with the durability, so we’ve stuck with it,” Glenn Anderson said.

The sidewalls may be old school, but Skevik doesn’t shy away from modern materials and construction. Their skis incorporate triaxial fiberglass, premium chip-resistant nylon topsheets and carbon stringers, all of which adds up to light, strong skis.

“A lot of companies will use flimsy carbon stringers just to say they use carbon in their skis. We’re using a hefty carbon that definitely adds to the stiffness while keeping the weight down,” Anderson said.

Last year, Skevik introduced the Loken, a stable ski with long, mellow early rise and flat tails for ripping big lines, in 116 and 106 models. That ski has been getting rave reviews from testers such as Catskiing.ca, but Glenn said his favorite model is still the first one they built – the Anton.

“It’s wider, a little more playful and easier to slash around in the trees,” Anderson said. The Anton was originally a regular-camber powder ski, 122 mm underfoot. It has since evolved to gain early rise in the tip and tail.

There are other skis in the lineup, all with graphics designed by local artists, and all made by hand in the Skevik shop. For more information, check out skevikskis.com.   x

Mountain Trivia: A great bouldering spot in the Chuckanuts, and what...