My skis glided on the consolidated spring snowpack. I peered up at the col above –our next destination – wondering how we would navigate the terrain as the sun triggered cascading wet slides in the saturated snow. An animal track caught my eye and I skinned towards it. The five-clawed prints dwarfed my own feet. Grizzly tracks. I had been warned about Big Brother, the grizzly bear, whose territory I was passing through. But the footprints followed the least avalanche-prone route.

My partner Andrew and I were deep in Unist’ot’en territory, a clan of the indigenous Wet’suwet’en Nation near the town of Houston, in so-called British Columbia. Noticing the melted shape and staleness of the tracks, we decided to follow them. The bear’s route guided us to the col where we looked out toward the river, threading through snowy, mountainous ridges.

To the south, a snow-clad range rose from a green and brown valley. After a long winter, buds were beginning to show and new leaves were poking out. It saddened me to imagine oil and gas pipelines snaking through the landscape, but proposed pipelines brought us to these mountains in the first place.

On that May morning we awoke with the sunrise at the Unist’ot’en camp, a cluster of cabins the Unist’ot’en First Nations people built in 2010 while protesting the construction of fossil fuel pipelines on their traditional territory. The pipelines would pass through the Coastal Mountains to proposed terminals in Kitimat, B.C., connecting tar sands in northern Alberta and fracking operations in northeast B.C. to the Pacific Coast and global markets.

It saddened me to imagine oil and gas pipelines snaking through the landscape, but proposed pipelines brought us to these mountains in the first place.

Currently, Chevron’s Pacific Trail Pipeline and TransCanada’s Coastal GasLink Pipeline have permits to build gas pipelines and have been clearing the route. These pipelines would put waterways along their route in peril and allow fossil fuel extraction in North America to expand dramatically. The Wet’suwet’en Hereditary Chiefs have unanimously opposed all pipelines in their territory. Like most First Nations in B.C., the Wet’suwet’en Nation never ceded their traditional territories – their land was never sold, surrendered in war or signed away in treaties.

A landmark 1997 Canadian Supreme Court case, involving 52 hereditary chiefs and their members from the Gitxsan and Wet’suwet’en Nations, affirms this. The court determined that First Nations never extinguished their sovereignty and that hereditary chiefs must be consulted on major developments on their traditional lands.

For the past eight years, Unist’ot’en Camp has welcomed and relied upon supporters coming to help build infrastructure and assist with day-to-day tasks. In May 2017, Andrew and I headed north to participate in the annual spring work camp. 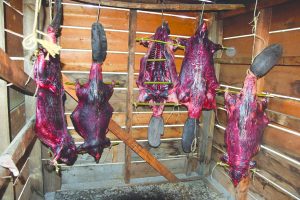 Our primary focus was to complete the final wing on a healing center, which required long hours of labor and carpentry. Community members took turns preparing meals, doing dishes, chopping wood, watering the garden and completing other daily tasks. Wet’suwet’en hunters brought back beavers and we learned to skin and process the hides. Throughout each day we stopped to break and take dips in the river to escape the heat, all the while building relationships with fellow supporters and our hosts.

After several days of work, Andrew and I approached Freda Huson, the appointed spokesperson for the camp, with a proposal to ski in the mountains west of camp. We wanted to create a short film to support the Unist’ot’en cause. She consented.

The next morning, our minivan bumbled along logging roads to the trailhead. As we approached the remote trail, a bull moose trotted through the forest. We parked next to a three-pronged lean-to built to prevent pipeline company helicopters from landing. The camp installed several of these tripods after Huson evicted a TransCanada helicopter crew trespassing on the land from that very spot in 2014.

We were warned about entering the mountains in late spring because grizzly bears were waking from hibernation. This was the territory of a three-year-old Big Brother. Considering my inexperience with bears and other wild animals, I was nervous and felt ill-prepared.

We began the trek with skis on our backs. As we bushwhacked along the creek we hooted and hollered to alert animals to our presence. My eyes darted to and from debris piles; Huson’s partner Smogelgem had told us that grizzly bears head straight to avalanche paths once they wake from hibernation to search out diuretic root vegetables to clear their intestinal plug after a winter’s rest.

Soon we donned skis and climbing skins and began sliding up the drainage. Soaking in the view of early morning mountains, I reflected on how we ended up in such an incredible place. I’ve always escaped to wild places to discover more about my surroundings and myself. When I moved to Bellingham several years ago I started putting more energy into outdoor adventures, entertaining a new dream of climbing and skiing big peaks. The vastness of the North Cascades inspired me to participate in further wilderness preservation because too few wild places remain.

Having spent many early- and late-season days skiing at Heliotrope Ridge on the north side of Mt. Baker, I’ve seen the Coleman Glacier shrink. Hotter summers and warmer winters allowed for pine beetle populations to explode and wreak havoc on the forests of B.C., including in Unist’ot’en territory, leaving the landscape an exposed tinderbox. Last summer, while working as a guide in the San Juan Islands, I was choked by the smoke coming from record-breaking B.C. fires. The smoky summer reminded me that the impacts of climate change extend across borders and fences. Just as fires burning elsewhere impact my community, the threat of oil and gas pipeline construction affects us all.

My head swirled with thoughts and concerns about the territory as we climbed higher on the mountain flanks. Huson said 90 percent of her traditional territories have been taken over by municipalities, rangelands and agriculture. Much of the remaining 10 percent, where they hunt, fish, and harvest, is in the route of proposed pipelines. A single oil spill in the heart of salmon spawning grounds could devastate Wet’suwet’en traditions and the entire ecosystem.

Reaching the top of Wo’bitl’et, a domed peak, we gingerly walked around and soaked in the views. Andrew and I sat on the exposed summit, wind licking our faces and sun warming our skin. I peered down into the river valley seeing the logged, checkered forests. Some blocks were brown, some were young and green. This birds’ eye view helped me connect the dots as a visitor. Extractive industries like logging and mining have left the river valley purged of resources and instead replaced with monoculture tree stands that were routinely sprayed with pesticides.

I thought about how Huson and her ancestors have been caretakers of this land for hundreds of generations and how the damage I witnessed occurred in only one or two generations. Under their protection the animal populations have begun to reestablish themselves and the forests are slowly healing from excessive extraction. I wondered where Big Brother was headed. I began to feel connected to the healing land.

The wind whistled as Andrew and I ripped skins, stomped in our bindings, and skied the open slope below. We had timed our descent perfectly. The snow had turned to corn on the northeast face and our skis glided effortlessly. Leap frogging each other as we skied, Andrew and I aired off wind lips and raced down the slope. “Wahoo!” we screamed, leaning hard into our turns and letting the snow swish beneath us.

We reached the bottom of the drainage and stopped at the creek to rest. Reveling in our adventure and pausing to catch our breath, we dipped our bottles into the gushing stream, drinking straight from the source. I threw my pack back on with a smile smeared across my face. As we returned to camp I felt inspired by the Unist’ot’en’s work and grateful to Huson for allowing our passage through her territory. Her words stuck with me: “These projects don’t just impact us, they impact the whole world because every water is connected and all air is connected.”

For more information about the camp, visit: unistoten.camp.

Michelle Tanz is an avid skier, bushwacker, and cascade enthusiast. She enjoys long walks in the mountains and nerding out on ecology. Follow her explorations on thesnowtroopers.com