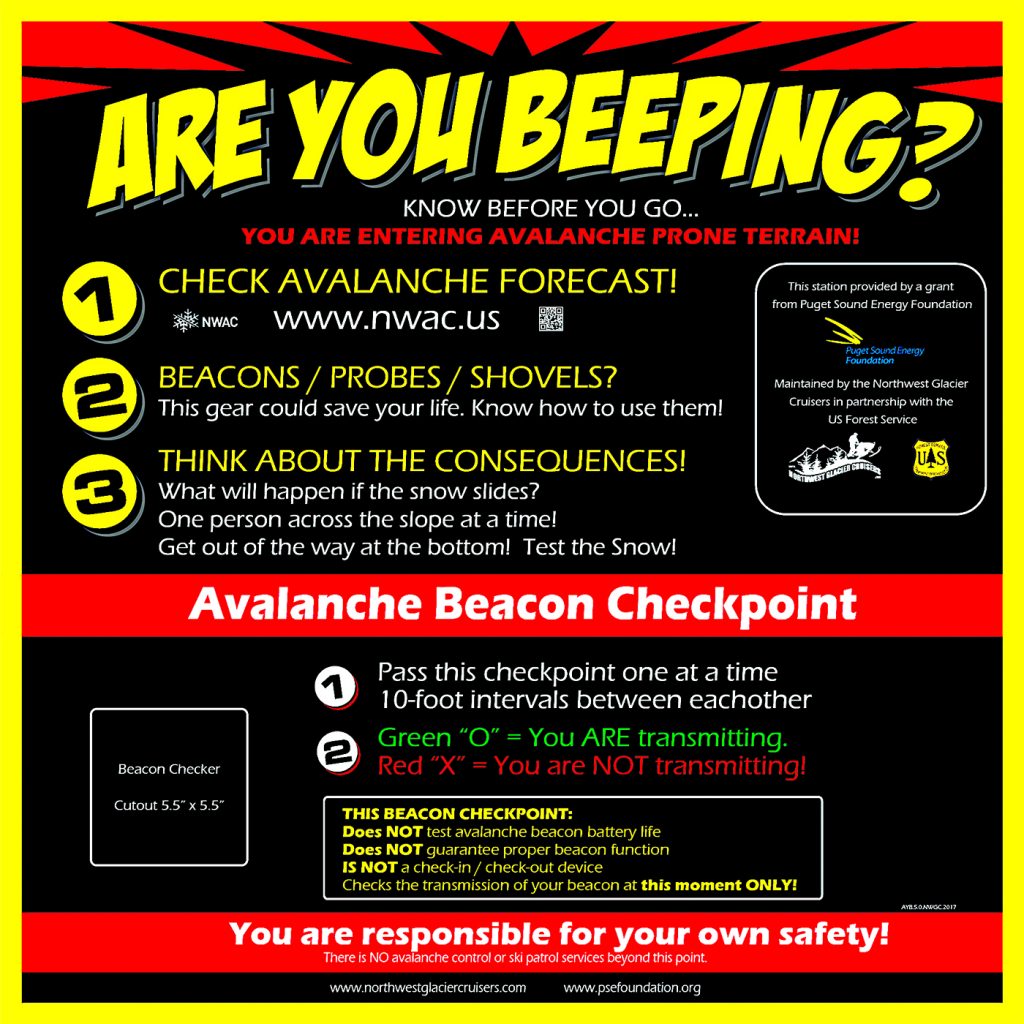 Have you ever gone to turn off your avalanche beacon after a day in the backcountry and found out you never turned it on? If you haven’t made this potentially fatal mistake, you’ve probably been with a friend who has.

Funded by a $10,000 Puget Sound Energy Foundation grant, the Skagit County-based club bought four signs with beacon checkers and is working with the Whatcom County Snowmobile Association to install them by mid-December.

“We’re always looking for ways to make our areas safer,” said club secretary Tina Shields. “That’s kind of our philosophy as a club right now – if we can make things better and safer then we’re doing what we need to do.”

“You don’t even have to stop at the sign and it lets you know your beacon is working,” Shields said.

The “Are You Beeping” signs instruct travelers to pass one at a time. When they get within 10 feet, the sign displays a green “O” if their beacon is transmitting a signal.

“You don’t even have to stop at the sign and it lets you know your beacon is working,” Shields said.

A solar panel powers the beacon checkers and a back-up battery allows them to work 24/7, even if the solar panel is covered in snow during a two-week storm.

The beacon checkers also collect data on how many people use them – data that Shields hopes could secure more funding for local plowing and grooming. In fact, collecting data is one of the original goals behind the signs, said Scott Waller, who designed and built them and runs the nonprofit Are You Beeping, which is based in Bellevue, Washington.

Waller sells the signs and hardware at cost and runs the company “with massive support” from his wife and daughters, he said.

Waller, former patrol director for the Cascade Backcountry Ski Patrol and National Ski Patroller of the Year in 2015, heard over and over from avalanche experts that they wished they had data on how many people traveled in the backcountry.

Waller’s beacon checkers are now collecting data at backcountry access gates and public trailheads from Alaska and Canada to Utah.

One thing is apparent from the data: the signs work. From the pattern the beacon tracker picks up, Waller can tell if people turn their beacons on while standing in front of the sign.

“I could see that a lot of people walked up to the sign and then turned their beacon on,” he said. “It actually shows we engaged the public and influenced them. You wonder, would they have turned on those beacons if the sign wasn’t there?”