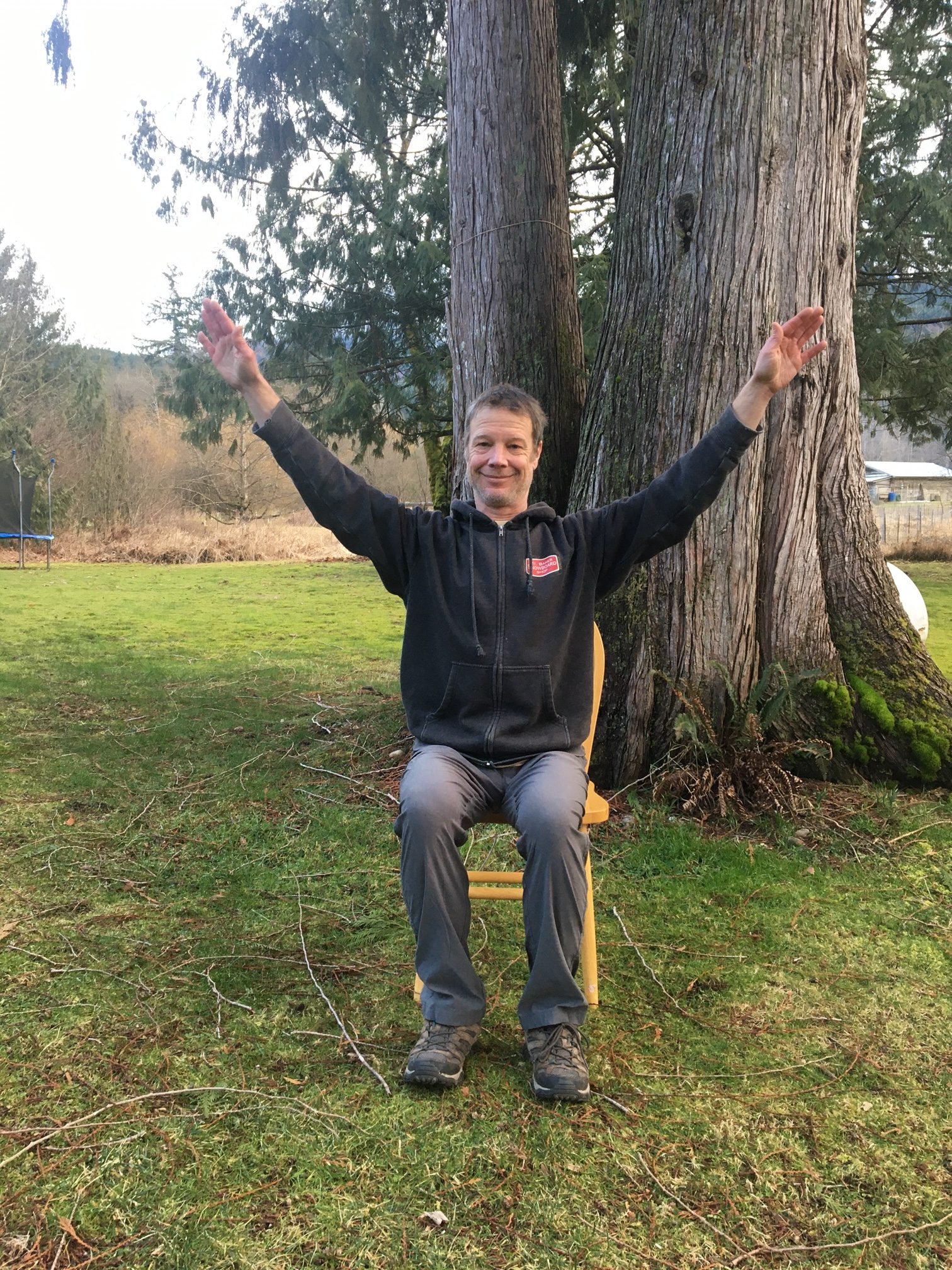 Sitting stretches to do throughout the day

Story and photos by Luca Williams

But ask now the beasts, and they shall teach thee. Job 12:7

In the early days of mankind, we learned from the animals that surrounded us. In some southwest indigenous cultures, they say that spiders taught people to spin thread and weave cloth. When I was in Rolfing school, over 15 years ago, my muscles were constantly taut and hard. My teacher said, “Luca, think about a lion’s muscles. Are they hard and firm when they are at rest?”

In that moment, it dawned on me that when I saw videos of lions at rest, their muscles were soft looking. It wasn’t until they pounced on their prey, fought to protect their territory or ran that their muscles rippled and contracted.

For years, my muscles stayed tense even when I was at rest, and I was in pain, especially in my twenties. When I started to relax my muscles like a lion at rest, the tight muscle-bound look that I had admired for so long, began to slowly disappear and so did my pain.

Learning from lions and other creatures became my mantra. As my life became busier with kids and work, I was frustrated that I didn’t have an hour a day to stretch. Then I remembered that lions don’t stretch an hour a day as a chore they need to complete. They stretch, luxuriously, all through the day. I wasn’t looking to become ultra-flexible or a ballerina or gymnast. I just wanted to be a lioness.

My goals were to be flexible enough to keep me feeling youthful and to help me realign after I had been sitting, lying down or working in awkward positions. My other goals were to be able to tie my own shoes in older age and to smile when I get out of bed in the morning, instead of groan.

So, I looked again to the lions that stretch when they first wake up. They stretch after they have been sitting for a while, staring out at the world or digesting their meal. They yawn and do their version of downward dog. I began to mimic them in my human way. When I wake up, I stretch. After I have been sitting down, driving or working for a while, I stretch. Before I go to bed, I stretch. My stretch sessions are a minute or two long, and if I get some time for a longer yoga session, I consider it a blessing. 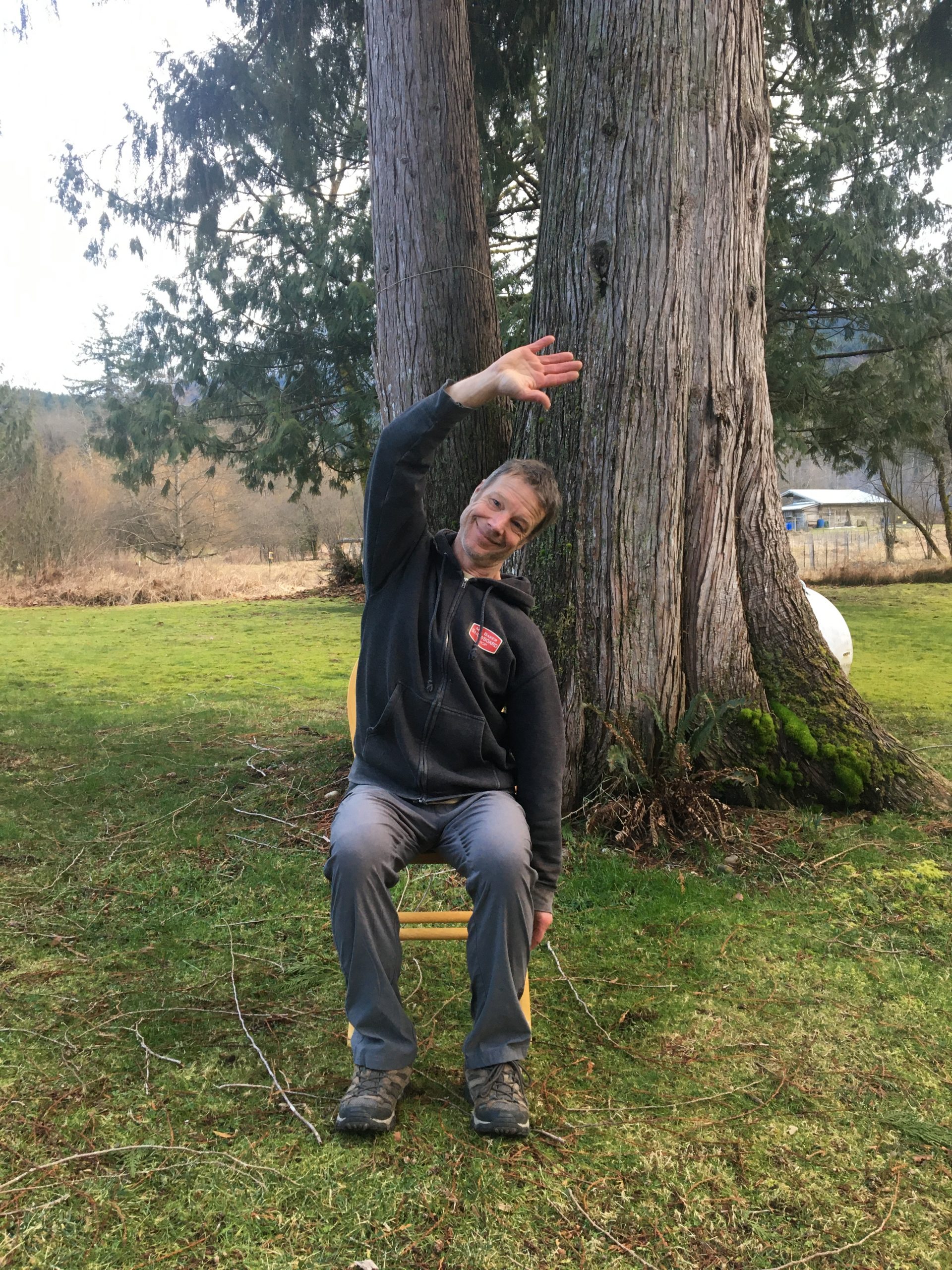 When I saw results of less discomfort, I asked clients to start stretching all through the day. Those who already had a stretching or yoga routine took to this concept immediately. For those who didn’t have a routine, we developed one by setting a timer on their phones. Every hour the phone dings, they do a few stretches before they get back to work. Within two weeks of this routine, their necks were longer, their shoulders were wider and their chests were less depressed. It only took eight to 16 minutes woven throughout the day.

Here are some of my favorite sitting “stretches.”

Turn away from your computer or your job for a minute and take a deep breath or two. If you can, walk around, but if you can’t, just do these simple stretches while you are sitting. First, stand or sit up in your chair so that your sit bones have equal weight on them. Turn your head and neck to the right and to the left a few times and then look up toward the sky. Now stretch your arms out wide and do backward arm circles while taking deep breaths. Then take a few seconds to side bend to the right and left, making sure you are actually stretching to the side, not to the front or back.

Finally, look around, if no one is watching you, try a variation of the ancient yogi lion pose, simhasana. Open your mouth wide, stick out your tongue and exhale deeply as if you are growling. Hopefully, after a few of these stretches, you start to feel like a lion at rest, ready to pounce when you need to.    x