The sky seemed to have merged with the sea, except the stars below the horizon were like fireflies winking on and off, too numerous to count. I’d never seen bioluminescence* like this.

The slightest movement in the water left a wake of blue-green sparkling fire that slowly faded to black over several seconds. A rock tossed into the depths was like a comet with a trail visible from surface to bottom. Fish scattered, and underneath was like sheet lightning, the depths disturbed. Even better, there was no moon to drown out this light show.

I couldn’t help but lay on the dock, staring into the water, trying to comprehend what I was seeing. It was too dark to take decent photos (without a tripod, which was back at camp) — photography being my usual way of processing something remarkable. But it also provided the opportunity to reflect on the week we had spent boat camping on Sucia Island Marine State Park in the San Juan Islands.

Truth be told, we weren’t even planning on the San Juans until a short time before we left.  Our original plan was to journey into Canada, but with the border closed to “non-essential” travel (vacations are essential!) meant we were left casting about for a Plan B.

Growing up I had often spent a week in the San Juans each summer, so it was an easy pivot, which afforded added bonus of seeing the islands through the eyes of my two boys, 10 and 12. It wasn’t hard to convince two other families to join us and the plan was set … if we could secure campsites.

The campgrounds in the marine state parks in the San Juans are first-come, first-serve, which works well for people like us who planned a trip last minute, but also poses a problem in that one could arrive to find all the sites taken at the chosen destination. Therefore, we had several other campgrounds on nearby islands scoped out as backups. But we never had to resort to Plan C since we scored the sites we needed for our group on Sucia. We were set.

Each day was a blur of activity as we took full advantage of our unique location. Some days we wouldn’t leave the island, lazing around camp drinking coffee in the morning, hiking to various destinations in the mornings and afternoon, beach combing, and watching the kids amuse themselves on the beach. 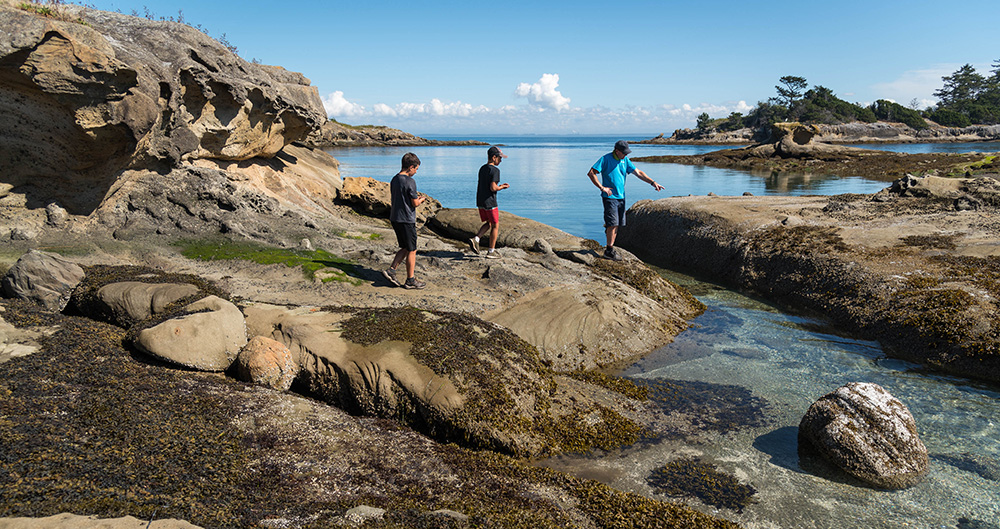 Sucia has about 12 miles of trail that access many areas of the 814-acre park and we tried throughout the week to walk about every trail at least once. It is an intricately shaped island with over 77,000 feet of shoreline, so there are many hidden coves, beaches and points worthy of exploration. While we could’ve spent the entire week on Sucia, there are so many other islands nearby to explore. And so we found ourselves on six other islands throughout the week.

On some we hiked, others we only sat on the beach and relaxed, and others we picnicked and swam. All had their own characters, their own histories, their own details to observe and compare. We were amazed at the diversity in such a small area. For example, on Jones Island we saw cactus growing on a windswept point with Western red cedar dominated wetlands just a few hundred feet away. On another, Garry oaks, madrone trees and wind pocketed sandstone combined to make that look that says, “you’re in the San Juans.”

But no matter where we were during the day, we always returned to our camp each night to fantastic dinners, campfires and sunsets watched from the bluff a short hike from our tents.  Campfires and s’mores were the standard aperitif (you don’t want to try and put a kid to bed camping without s’mores) as the lights winked on boats swinging at anchor in Fox Cove and Fossil Bay and the stars came out. 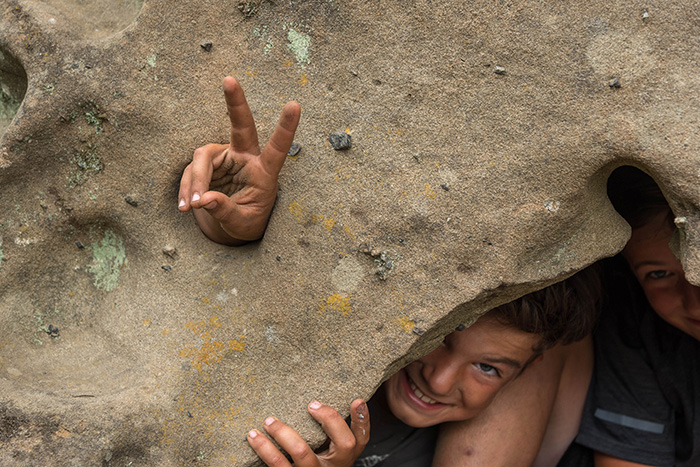 Then, after dark, it was time to head to the dock to look into the water and think.   x

*Bioluminescence is light produced by a chemical reaction in a living organism. In Puget Sound most instances are caused by blooms of a single-celled plankton named Noctiluca scintillans aka “Sea Sparkles.” During warmer months, the population of the organism can explode, leading to large patches of the reddish algae visible during the day near the surface. At night, the blooms lead to episodes like we witnessed on Sucia. Noctiluca luminesce (glow) when physically disturbed, which is believed to be a defense mechanism to scare off predators.