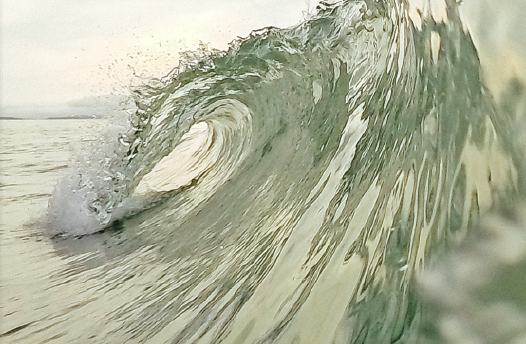 Em called to cancel our meeting. “Something’s come up,” she said. “Can we reschedule for next week?”
I looked out the window noting the down-valley wind, and thought about the big storm out in the Gulf of Alaska forecast to come in two days from now. I knew just what was up. Em’s a surfer, and in the Northwest those rare days when conditions are right need to be seized, work be damned.
In our area, the best time to surf is generally winter or early spring, when waters are in the 40 to 50-degree Fahrenheit range. The typical northwest surfer is nothing like those golden girls and boys in skimpy swimsuits on the beaches of Maui. To surf here, one needs to be committed, expert and swathed in neoprene from head to toe.
Sound good? You can find good breaks in the northwest straits, but you’ll have to do some exploring on your own. My surfer friends were polite enough not to laugh in my face when I asked about local surf spots, but only just. Nobody’s going to share beta on a favorite break with an amateur, much less a writer who’s planning on publishing the info. Good breaks around here are just too rare, and inexperienced surfers dropping in on someone else’s wave are both unwelcome and dangerous.
It’s best to learn to surf at popular beaches on the Pacific coast of Washington or Vancouver Island, where you can develop skills without getting in the way of others.
Learn on during the summer when waves are less powerful, said Dennis, who became addicted to the sport in his California childhood, and has surfed our area for decades. Watch experienced surfers, hone your skills on small waves, and slowly get to know more experienced riders. If you do luck into a good break, respect the locals, stay out of the way and make sure they get the waves they want first. Following this unspoken etiquette is the only way to gain acceptance.
A great way to get started is by heading to the surf schools and rental shops in Tofino, B.C. and Westport, Washington. Beaches at LaPush or Hobuck beach in Neah Bay also provide a range of conditions and plenty of room for everybody. Surf shops from Port Angeles or Forks often station a trailer in the beach parking lot where one can rent boards and wetsuits.
Start by taking a lesson or two, or learn to drop into waves on your stomach or a boogie board. You’ll need to rent or own a wetsuit; 4/3 is good for the summer (numbers represent thickness in mm on the torso, arms and legs), but you’ll want something heavier for winter (5/4 or even 6/5), plus a neoprene hood, gloves and booties.
Don’t go out and buy an expensive board. High-end boards are light and fragile, and one thing is for sure, as a beginner you’ll beat it up. You’ll hit it with elbows and knees, or scrape up the fins by riding all the way to shore. Rent a board from the surf school, or better yet find a buddy who will loan you an old beater molded-plastic model or soft-top.
Learn what conditions mean good surf in our area; while wind speed and direction are key, the best times to ride will vary from site to site based on local topography, coast orientation and tides.
Once you have some skills, be prepared to drop everything to hustle out as soon as the stars align. I recently watched a surfer catch some waves at Cape Disappointment. His session consisted of two good rides interspersed by a 30-minute battle with the crashing waves to get back outside the impact zone.
By the time his buddy showed up a few minutes later the moment was lost; a slight change in tide height skewed the direction of those gorgeous waves. We basked in the spring sun watching the waves slam into the cliff below the lighthouse for a while. Then everybody adjourned to the office, daydreaming about the next big break.   x