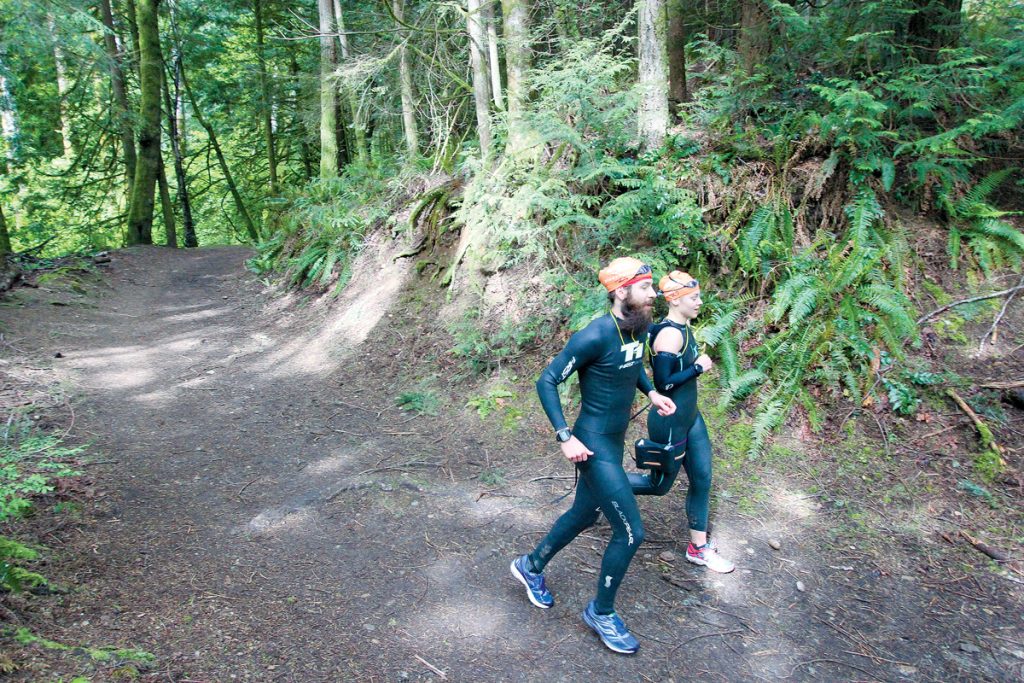 Swimming and running both offer simplicity. You can do either sport with basically no special, expensive gear. Put the two together and they still don’t really require extra gear. In fact, one can run to the water, swim across it to the trail, get out of the water and start running again, only to repeat the whole thing minutes later.

Surprisingly, more and more people are doing just that: combining the two simple sports to cover long distances in an amphibious new sport called swimrun. Basically, it’s a triathlon without that awkward part where the participants splash out of the water onto a bike with funny handlebars, and then attempt to wriggle wet feet into cycling shoes.

The sport started, legend has it, as a drunken bet between four guys in Sweden who wanted to see if they could swim and run between a couple of dozen islands in the Stockholm Archipelago. Their 26-hour escapade across forested islands and through chilling northern waters became a race a few years later.

The sport slowly spread across the planet, despite the fact that some places just don’t have great swimrun terrain. On May 4, 2017, Brent Molsberry and Recreation Northwest introduced the sport to the Pacific Northwest – a place overflowing with ideal swimrun terrain (that is to say, water and land). Before the inaugural Bellingham Swimrun last May, the closest swimrun race to the Pacific Northwest was in San Diego.

“It just seemed like a really interesting and cool style of racing,” said Molsberry, a competitive adventure racer. “There are a lot of places where you would have a hard time coming up with a challenging course. Here we have a lot of great
options.” 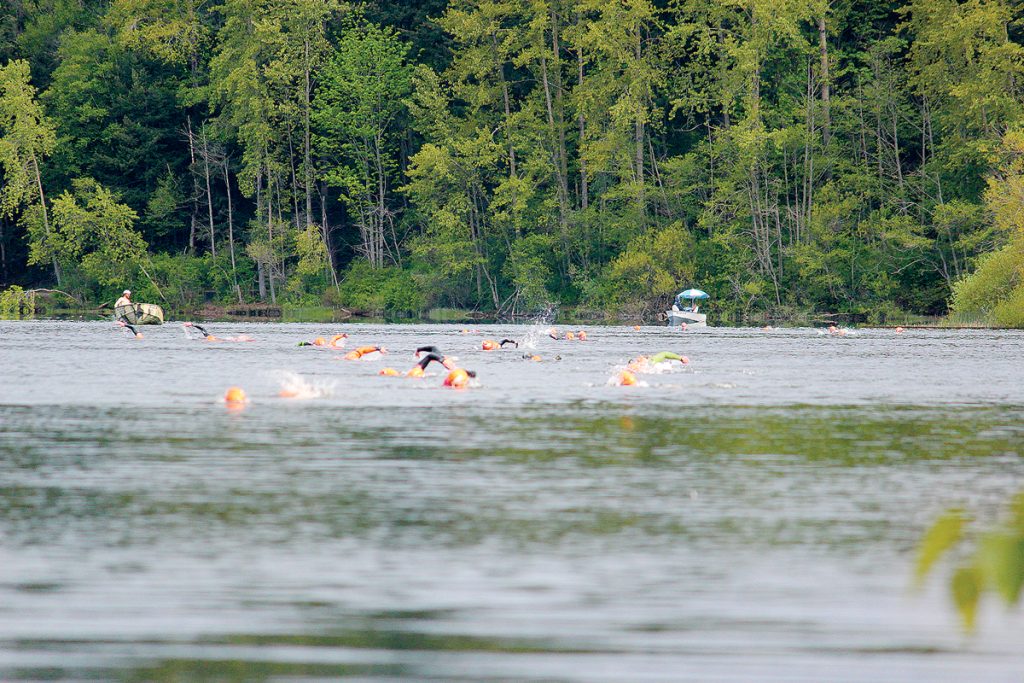 Nearly 50 athletes participated in the Bellingham Swimrun, a 15-kilometer race through Lake Padden Park. The course included about 12 kilometers of running through the hilly forest surrounding the lake, and three kilometers of swimming in the still-cold, choppy water.

In the spirit of the original race, racers compete in teams of two and the swimming and running don’t happen all at once, but in seven different running legs and six swimming legs, with racers going seamlessly from water to land and back again, all in dripping neoprene and with goggles on their heads.

And while that might seem ridiculous, swimrun does make a special kind of sense.

When local triathlete and triathlon coach Mo Trainor heard about swimrun and its surging popularity, she thought, what’s the big deal? It’s just triathlon without bikes.

“I wasn’t sure what the goal was at first, other than putting these two things together,” she said. “But I think they do naturally complement each other, in a way. There’s a real interesting fluidity in going from a liquid environment to a trail or paved environment and using your body in different ways.”

Some early swimrunners have described the sport as a backlash to triathlon. Competitive triathletes are famous for their focus on expensive gear, and data collected in 2015 by USA Triathlon found that the median annual income for triathletes was $126,000.

That doesn’t mean swimrun is cheap, necessarily. You need a wetsuit, shoes, swim goggles and a whistle. You can use other things, such as swimming paddles or swim buoys, but you have to carry them during the run. Bellingham swimrun winners, Elliot Rushton and Barry Berg, from Vancouver, B.C., carried big hand-held paddles.

Trainor is a competitor and her mind inevitably turns to strategy and tactics when she’s discussing sports. Swimrun makes sense from that perspective too, she said, as alternating sports allows muscles to recharge.

“When you’re in the water, your job is to conserve your legs for the run,” she said. “Same thing with triathlon; when we’re in the water we don’t kick a whole hell of a lot.”

Molsberry was impressed with the number of people who signed up for the first swimrun, and almost none of them had ever seen a swimrun before.

“It’s new so it’s exciting, but on the other hand I think people didn’t really know what it entailed,” he said. “The excitement around it was really fun.”

Bellingham Swimrun will be back in 2018, and Molsberry is looking at venues for another Northwest swimrun, possibly including a much longer course. 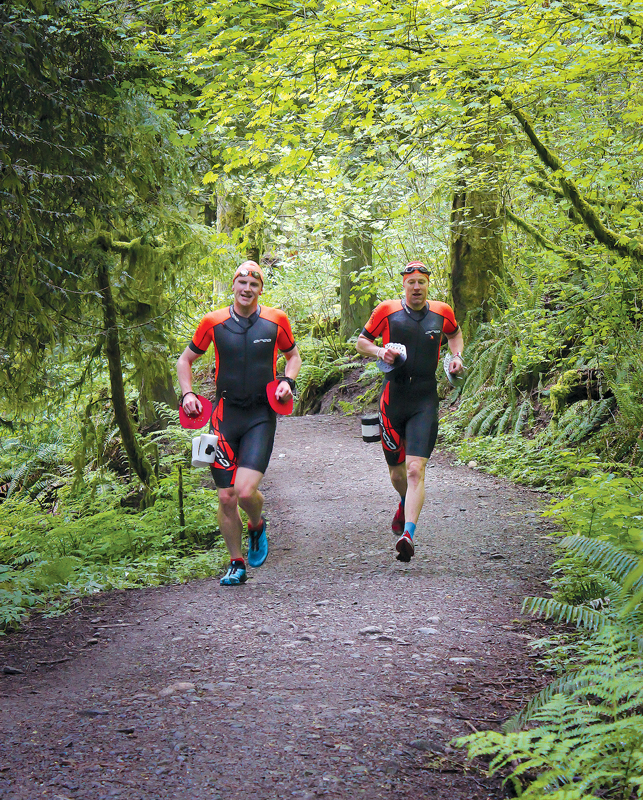 Conserve your energy and be efficient. Rest your legs in the water to save them for the run. Don’t stand up too soon when exiting the water – it takes more energy to push through water walking than swimming on the surface. Swim in as far as you can before standing and aim for being able to touch bottom with your hands before you stand. And when you enter the water, start swimming as soon as possible.

Invest in the swimrun basics – wetsuit, cap, goggles, minimal running flats, and maybe a swim buoy, paddle or fins, but keep it minimal. Remember, whatever you swim with, you must carry with you on the run.

Tyson geBauer is a professional photographer, tour guide, builder and adventurist. He has spent the last 30 years on the peaks and in the valleys of Washington He lives in Welcome, Washington with his wife and daughter.