Jake Merrill, 23, died in an avalanche on February 11, 2014, while guiding a hut skiing trip in the Eagle Cap Wilderness, in northeast Oregon’s Wallowa Mountains.

Merrill’s death hit a lot of people hard, both because of the circumstances – he was on his first trip as a paid guide after a years-long process of studying and internships – and because he impacted a lot of people in his short life.

“You know how they say the good die young? That was the epitome of it,” said Mitch Lee, who grew up with Jake in Bellingham. The two became best friends after meeting on a middle school baseball team and remained friends through college at Western Washington University, where they both majored in recreation and lived together in Fairhaven. “The whole thing was hard. It was hard for a long time. Losing a best friend, there’s no easy way around that.”

“Jake was always the dude that you wanted to be around. He was the nicest, most genuine guy. He was friends with everybody. He never seemed to say anything negative in any way,” Mitch said.

After February 11, people close to Jake gathered to grieve. To Mitch and his brother Brandon Lee, who was also close with Jake, sorrow didn’t feel like the right way to honor the life of someone so infectiously positive.

“We would always have these get-togethers where everyone would remember stories about Jake and start crying and I’d just look around and think, man, there’s no way in hell he’d want us to be doing this. He’d want us to be getting out and adventuring,” Mitch said. “So I was looking for a way to get everyone together but have it be a happy thing.”

Mitch, Brandon and Jake had raced Ski to Sea, the annual multi-sport relay race from the Mt. Baker ski area to Bellingham Bay, several times in high school. Mitch rallied to start “Team Jake,” figuring that racing through the landscape Jake loved would be a way to remember him in a way he would have approved of.

“When we first heard about the team’s efforts in 2014, we knew immediately that it was an effort that Jake would love,” said his parents, Jill Heckathorn and Glenn Merrill, in an email. “If he were in their shoes, we knew and we believe the team knew, that he would be participating with everything he had. A perfect way to remember him.”

Merrill always loved the outdoors and spent a lot of his adult life helping others experience the outdoors. He graduated from WWU with a degree in outdoor recreation, worked as a trip leader at WWU’s Outdoor Center and took incoming freshman on orientation trips, completed a NOLS mountaineering course in Alaska, worked as a ski instructor and had internships with North Cascade Mountain Guides and Baker Mountain Guides.

Along the way, he had a lot of opportunities to make a difference to people, whether they were his mentors, other aspiring guides, or college students on their first backpacking trip. For many, Jake was unforgettable. “A lot of times people will be like, “Oh, yeah, I met him once and I remember him distinctly,” Brandon said. “The number of people he knew and the number of people he affected always blows my mind,” Mitch added.

Getting the required (at the time) eight racers together to form a Ski to Sea team in a few months was easy. By sign-up deadline, Jake’s friends had formed two teams: Team Jake and Team Merrill finished within two minutes of each other.

The experience was about more than the race. It was an excuse for a weekend-long celebration for Jake’s friends from near and far, and it also included Jake’s parents. Jill and Glenn hosted a pasta feed the night before Ski to Sea, followed the team during the race and came to the after party at Mitch’s house.

“The first year was pretty emotional but at the same time I remember it clicked. I was like, this is the thing we can do that isn’t sad. This is the positive way for us get out and celebrate his name,” Mitch said. “His mom’s been like a second mom to me my whole life, and I remember she was like, “I don’t want this to stop. Two years down the road, I don’t want people to stop coming over.”

Mitch didn’t want it to stop either. He didn’t set out to make racing with Team Jake an annual tradition, but every year since, enough other people have wanted to race in Jake’s name and year after year Mitch found he “couldn’t figure out a good reason to not do it again,” he said. He’s currently putting together the seventh annual Team Jake. 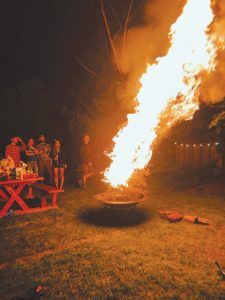 Jake’s parents continue to host a pasta feed and follow the race, and they usually come to the party at Mitch’s house the night after, though they don’t always stay late for the Christmas tree burning, a tradition that started not because Jake burned his Christmas tree, but because that’s in the spirit of how he would go about life, Mitch said.

Team Jake continues to bind Jake’s family and friends, and carry Jake’s legacy into the future. As he did in life, Jake is still bringing people together.

“We have been so touched by some of his closest friends who continue to honor him each year, racing as Team Jake,” Jake’s parents said. “Although we are reminded regularly that Jake’s presence lives inside those who loved him and whom he loved, efforts like the Ski to Sea team remind us that he continues to matter in the world. That is a beautiful thing for us.”