An interview with Jason Hummel

Jason Hummel’s photographs have appeared on magazine covers around the world, including the magazine you’re holding in your hands. In addition to being a professional photographer, Hummel is an accomplished backcountry telemark skier, and the marriage of his two skills has proven symbiotic.

Hummel has logged more than 50 first descents in the Cascades and captured each trip through his lens. You’ll rarely find him riding a chairlift – much less a helicopter – for a photo shoot, and if you come across one of his images in the glossy pages, chances are he skied or hiked a long distance to create it.

His unique perspective combined with the remoteness of his locations lends an emblematic style to his images. We caught up with Hummel in between projects.

Mount Baker Experience (MBE): Tell us about yourself.

Jason Hummel (JH): I’m a photographer, I’m 35 and my hometown is Morton, Washington.

MBE: How long have you been a backcountry skier, and how did you get into the sport?

JH: I began backcountry skiing when I was 5 years old at Mt. Rainier National Park. My parents went to a yard sale and bought the entire family ski gear for $20, or so the family legend goes.

MBE: Was photography a means to make a living in the backcountry, or a passion in its own right? How did you acquire your photography skills?

JH: Photography was a passion. It was a way to tell the stories of my mountain adventures better than words could alone. I was a self-taught photographer. Every time I took an image, I would critique myself. Nothing was good enough. It still isn’t. Over time, I realized that this process is amazing. If I am not satisfied, then I have more to learn. When I have nothing left to learn, I will have to move onto something new.

MBE: Your photos tend to be “out there” – often hours and sometimes days from the nearest road. What are some of the challenges involved in getting good shots in such remote locations?

JH: Time is the biggest challenge. When climbing, skiing, biking, etc., you are in the process of completing a goal. Time is normally limited. You have to keep up with your partners, and spending even a moment looking for a shot is often too time consuming. Each shot can put you farther and farther behind. That coupled with the added weight of my camera and lenses, around 15-20 pounds, means that I have to be that much stronger or push that much harder than everyone else. In trips that last days, the challenges intensify, but at the same time you are immersed in those environments. It is a give and take. Your body becomes harder and after a time the challenges are easier. The biggest trouble becomes recognizing beauty when it is right in front of you. You can become so numbed to the beauty that you don’t recognize it for how unusual it is.

MBE: Why put in so much effort? What about these wild places draws you?

JH: Disconnection. I think that word is a fine explanation for me. It’s about disconnecting from my city life, where I am immersed primarily in the past and future. In the mountains I am gripped by the present. Hunger, pain, fear and on the other hand beauty, fascination and awe compress my universe into what is immediately in front of me. More than anything it is the immeasurable peace I find in living in the moment that draws me to the mountains time and time again.

MBE: In your adventures, you’ve come through some hairy situations. Give us a short story of a close call.

JH: Close calls happened many times, especially in my youth when I refused to be situationally aware. I was too focused on the end game – a summit or descent. One memorable close call was Fortress Mountain, where an avalanche carried me over cliffs and I ended up a thousand feet below the summit, which had been above the clouds. When I emerged from a state of primordial fear back to reality, I found myself below the clouds, atop the avalanche. It was a reawakening for me. I made a promise to myself to be aware. From that point on, I’ve been in the mountains more than ever before, and I haven’t had a close call since. That was seven years ago.

MBE: What were your top three most memorable first descents?

MBE: The American Alps traverse you completed last summer with Kyle Miller was a groundbreaking linkup of major ranges and a longtime personal goal for you. Can you describe the trip in a nutshell?

MBE: What are some adventures on your horizon?

JH: I’m hoping to visit Norway and Iceland. If not there, then I will literally pick up a map and throw a dart. I’m itching for world travel.

MBE: What’s your favorite sub-range of the North Cascades?

JH: Picket Range. It is surreal and has so much packed into such a small area. Even with six or seven trips into them, I still feel like there is a lot of mystery left. 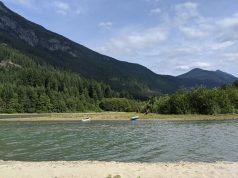