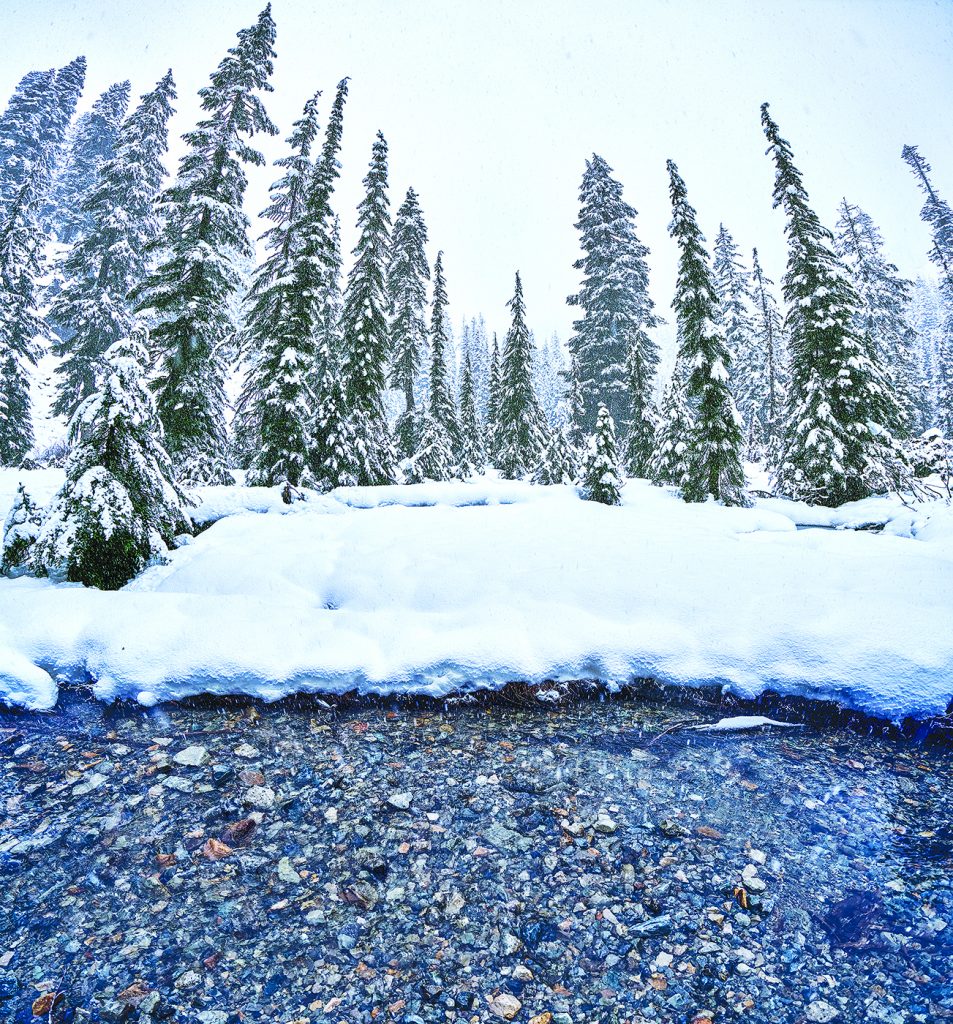 Story and photo by Beau Gaughran

The Pacific Northwest is a land of magic. As a budding photographer who is somewhat new to the area, I find something special around every corner – a distant view of Mt. Baker or the way light gets filtered through rain and moss-covered branches to hit the trail just right.

A typical day of snow sliding, be it touring in the Baker backcountry, hiking Cowboy Ridge at Stevens Pass or riding the lifts on a deep day, usually starts in a far tamer place. We begin in the lowlands, where the weather is about the same as it was the day before. We wake up before dawn and throw everything we need into the car; hastily made coffee gets dumped into mugs as we worry about what we could have forgotten and argue about which episode of “The Dirtbag Diaries” to listen to.

Heading out of town, we’re in a semi-dream state. Light soaks into the sky and clouds begin to glow. Driving toward Stevens, we’re lucky if we catch a glimpse of Rainier as the sun comes up. But the magic doesn’t truly begin until we reach snow.

Introducing the Snow Globe Effect: that sensation you get from entering a winter wonderland from the green forests below snow line. I love this moment. The snow line filters out all the stress that built up during the workweek. I am finally clear-headed.

I think you, too, experience the Snow Globe Effect.

As you drive towards your mountain playground from any of the low elevation towns, you inevitably cross that ever-elusive snow line. If it’s raining, the droplets turn into fat flakes. The sound of water hitting the windshield stops. The frosty down feathers of winter envelop your vehicle. Everything gets quieter. The crowded thoughts of the workweek fade into pillow lines, powder turns and the white room.

If it’s dry, you get a different sensation but with the same outcome. Without an obvious transition, the effect hits later. It’s kind of like drinking with family over the holidays – you don’t realize you’re slurring your words until you’ve just wrapped up a deep conversation with an equally wasted aunt Nancy. Sometimes you realize it in the middle of your skin track. Here, the Snow Globe Effect can be confirmed when someone blurts out something like, “Holy Cow, guys, we’re on the moon.”

The feeling I get crossing the snow line while headed to the mountains is like teleportation, or like walking through a wardrobe into Narnia.

We are all are guilty of occasionally daydreaming about being somewhere else; somewhere radically unlike our current environment. We’re always scheming up expeditions to faraway places, wishing we could teleport to the top of a peak that we see while driving or to a sexy surf break in Indonesia we saw in a magazine.

We are exceedingly lucky to live where you can stroll in a temperate rainforest or along the Salish Sea in the morning, and in the afternoon be halfway up a snow-covered volcano.

The next time you’re at a low point in your week, wishing you were up in powder heaven, just remember that you live in a snow globe. Here in the Pacific Northwest, at any time of the year, you can find Mother Winter. Sometimes it just takes a little more hiking.

Beau Gaughran is a Bellingham-based freelance photographer from Maine. He moved here last summer for the incredible whitewater, year-round splitboarding and mountain playgrounds where he practices his craft.