In February 2017, Bellingham resident Bill Hasenjaeger attended an outdoor expo where he walked into a talk about recreation-related business and described his target market as unemployed mountain bikers building jumps on trails.

That’s a small market, compared to others at the talk. It’s also an overstatement, Hasenjaeger admits, but it captures his surprise at the fact that there actually is a market for what he makes – a sturdy, packable tool for building and maintaining trails called the Trail Boss. The Trail Boss has a long handle that breaks apart and interchangeable tool heads, including hoes, shovels and a saw, and can therefore do the work of multiple long-handled tools. But it costs up to $700, depending on options. 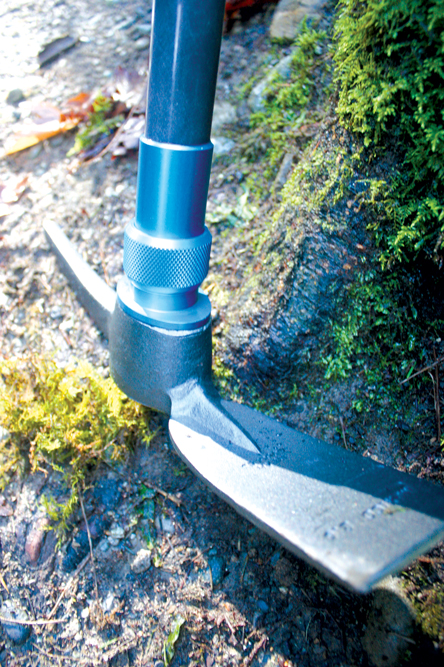 “A lot of people are surprised there’s a market for this. I am too,” Hasenjaeger said. “This was not brilliant foresight on my part. I totally fell into it.”

He finds the talk of a “target market” funny, because it implies that he had a market in mind when he came up with the product. He made the first version of the Trail Boss in 2009 for his own use. He now works nearly full-time on the company, which became profitable in 2013. It turns out that though his segment of the market is just a sliver, it exists worldwide.

Google search “packable trail tools” and Trail Boss is the first thing that comes up. It’s virtually the only packable tool in the first two pages of results. That’s something google-using trail builders around the world have discovered.
“The pattern that happens over and over is that somebody somewhere discovers us, they buy one, and within three months I get five or six orders that are circled around that first one,” Hasenjaeger said.

Though the Trail Boss sells best in the U.S. and Canada, that pattern surfaced in Switzerland, Germany, France, Italy, England and Ireland, among other places. Hasenjaeger’s also shipped a tool to Saudi Arabia and 10 or so to a kibbutz in Israel, where they’re being used to restore and maintain an ancient trail in the desert. The Australian government recently bought 30 to equip wildland firefighters – a partnership that Hasenjaeger thinks could continue, as with some feedback, he could make specific adjustments for firefighters.
Hasenjaeger is a laid-back 62-year-old who walks with a slight limp due to a knee that’s bad from his motorcycle days, among other things (“skiing, rock climbing, falling off of stuff,” he said). He has been working on trails for more than 40 years, starting with a motorcycle club in California’s high Sierras and continuing to present day on Galbraith Mountain, Bellingham’s mountain bike mecca.

He worked as a machinist while going to college, then started developing software for manufacturing, and was eventually managing software developers. He stepped down from that in 2016 to work on Trail Boss, but he’s still doing some part-time consulting work, which included work on the automated system that lays up wings for Boeing’s 777X, the company’s latest automated manufacturing endeavor.
That is to say, designing the Trail Boss, sourcing materials and managing production wasn’t a great leap for Hasenjaeger.

The Trail Boss is probably mostpopular with mountain bikers. It’s hard to haul tools on a bike, and carrying tools on foot several miles to work on a 10-foot section of trail isn’t near the top of a weekend to-do list for most mountain bikers. Because of his bad knee and the fact that he likes riding bikes, Hasenjaeger prefers riding to the work site when working on trails.

The Trail Boss isn’t the only tool to address this issue. Even when Hasenjaeger was a teenager riding a motorcycle beneath the stark granite peaks of the sierras, there were packable tools on the market. But, Hasenjaeger found, they didn’t work.

“You could buy these telescoping things – rakes and little folding shovels and stuff like that,” Hasenjaeger said. “If you were trying to dig out a little drain or something simple, maybe they were OK, but they always broke. They had these plastic twist joints that would just fall apart, so they really weren’t practical.” 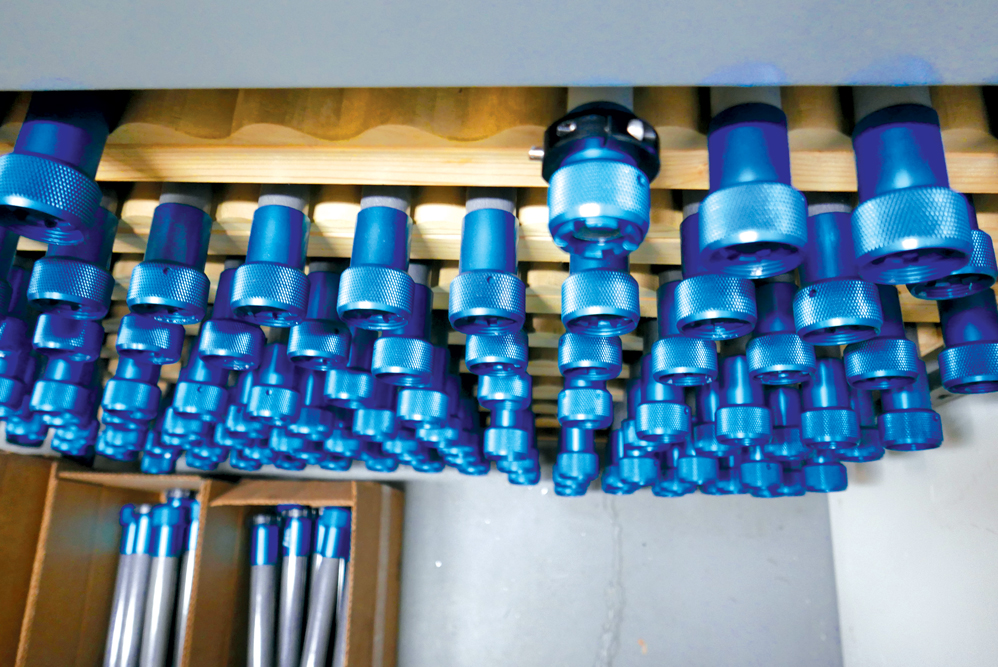 Hasenjaeger set out to make something that wouldn’t break and could fit into a small daypack.

The packable tool that Hasenjaeger came up with eight years ago was stronger than anything else on the market. Its handle is made of up three or four sections of fiberglass linked by aircraft-grade aluminum couplers. About 10 different alloy steel and ductile iron tool heads can be attached.

Hasenjaeger started building and maintaining trails with his tool. He kept refining it, and gave some away. People started seeing the tool in action on Galbraith, and most people thought it was really cool. Some Galbraith trail builders became early adopters of the Trail Boss.

“The Trail Boss is basically all I use now,” trail builder Russ Lambert said. Lambert got an early version of the tool, “I think Bill has put a lot of energy into building a high-quality tool. When something isn’t working quite right he makes amends.”

Lambert has been building and maintaining trails on Galbraith for more than 20 years. His trail-building resume includes such Galbraith classics as Mole Trap, Tough Love, Pony Express and Jack and the Beanstalk. When building those trails, he packed in all kinds of tools: a McLeod, hoes, shovels, a small chainsaw, a handsaw and a pull saw.

Lambert’s trail boss fulfills the function of nearly all of those tools. Plus, it works for a different style of trail maintenance. Lambert can go for a long ride with the Trail Boss in his pack and make a few stops to repair a washed out section of trail or remove a downed log.

“The advantage of the Trail Boss is you can get farther in and do trail maintenance, which is what I like to do now; I ride around and do spot maintenance,” Lambert said.

While knowledge of the tool spread by word of mouth, Hasenjaeger started the business in 2012, and called it Trail Insight. The company got a big bump in early 2012, when Kevin Menard, co-owner of Transition Bikes, made a video about the tool with footage of Hasenjaeger machining it and the tool in action on the trails. Menard published the video on Pinkbike.com, it quickly racked up thousands of views, and Hasenjaeger’s inbox blew up.

“I was in scramble-mode trying to deal with all those orders.” Hasenjaeger said. “I had to follow-up with everyone and tell them we didn’t have anything on the shelf, that I had to make it all and it’s just me.”

The typical response was, “That’s cool, I can wait,” he said.

It took Hasenjaeger nearly four months to catch up with those orders, and the whole time more orders were coming in. Growth has continued steadily since then. Hasenjaeger has managed that growth by hiring Irongate Machine in Bellingham to do some of the production manufacturing. He also got a part-time employee and moved out of the garage.

Trail Boss is now headquartered in a combined shop and office space. Some inventory and machining equipment is in the back, and an office is up front with some desks and a few folding chairs beneath photos of motorcycles hanging on the wood-paneled walls.

Hasenjaeger has an out-of-the-way desk for his software consulting work. On the other side of the room is a table and computer for his Trail Boss work. One day this winter that table had a prototype of a leather Trail Boss carrying case on it. For all his manufacturing experience, working with leather is new ground for Hasenjaeger. But the experiment has the same mission as the Trail Boss: making it easier to carry trail tools.