The War Against Nature Deficit Disorder

“One thing that goes on under the radar is what is happening at the ski area on a day-to-day basis,” she said. Howat is talking about several new programs at Mt. Baker aimed at providing youth greater access to nature – something she thinks is increasingly lost from American life. As each generation becomes more connected to cell phones, computers and the internet, Howat said, youths are becoming increasingly disconnected from nature.

And according to Richard Luv’s new book “Last Child In The Woods: Saving Our Children From Nature Deficit Disorder,” Howat’s observations are not far off the mark.

“Youth, not only in the Mt. Baker community but in American society in general, seem to be developing a different relationship with nature than any generation before them,” she said.

Q: At least half of Mt. Baker’s pass-holders are under the age of 18. What specific things have you noticed among that demographic?

A: We’ve noticed it starting with something as simple as dressing inappropriately. The kids take for granted their environments are artificially controlled, they just think the lights are always going to be on and there’s always going to be heat. You see it when you see kids waiting for the bus in the snow in a t-shirt. The other is navigation and route planning and a sense of time. Many youth in our Ski Bus program seem to have a difficult time correlating route planning with time frame. They seem to have a different awareness around it. It seems to be much more challenging for them.

Q: Why do you think it’s important for kids to have access to wilderness?

A: We are living in an increasingly technological society and the mountains are a great place to promotes these skills that are being eclipsed by technology. But there’s also a sense of freedom kids get from being in an outdoor place without having a teacher or a parent around. A few weeks ago, I asked some third graders where they like to play and their answer was they liked to play indoors because that’s where all the electrical outlets are.

The whole concept of recreation means to re-create. But they’re also finding a direct connection to creativity. Our sense of wilderness in America — which is very unique in the world — has spurred a particular type of creativity that’s directly connected to our culture, to our music, industrial design, and art than other industrialized societies which have become more focused on efficiency and interaction. There’s a creativity that comes with simply having access to open spaces.

There’s also a huge body of evidence that children’s development and a huge part of their creativity and self-assuredness, comes from being in nature. Electronics won’t give that the “pieces” nature provides like the dirt, the trees, branches, rocks, and snow. The only toys that come close to that is Legos and maybe that’s why they’re so popular. There is a certain creativity that comes from having to construct things out of nature. If children are only surrounding by plastic toys and electronics, they’re missing this other element that is not replicated anywhere else yet. Part of why we don’t have a day care is because we want to encourage parents to interact with their kids in nature to help make the experience as rich as it can be. This is not like going to the mall, it’s a rugged environment with special considerations. (Please turn to page 16)

Q: What programs are you offering to help combat NDD?

A: We have our “Dads, Moms and Groms” program (groms is a term for little skateboarders) which helps provide a social environment for children ages five and six and helps give parents skill building tips on how to teach their kids.

We also have our “Komo Kids“ program, a six-week program that’s been around for 45 years and gives kids a chance to progress with the same instructor. At the end, there is a race where everyone gets a participant medal.

We also have the “Winter Ride” program, a sliding fee program which buses in 1,000 to 1,300 kids throughout the season to the mountain. It’s a phenomenal way to introduce kids to snowboarding and skiing. We really try not to have the monetary component be a real prohibiter for a kid who might not otherwise be able to afford to go.

The other thing is we’ve been working with Baker’s Breakfast Cookies to donate free breakfast to all 1,200 kids and also provide an educational program along with that. We did an informal survey a few years ago and we realized that at any given day on the mountain, about half of the kids hadn’t eaten breakfast and if they had, it was basically sugar or energy drinks.

Lastly, my mom, who was a fifth-grade teacher at Harmony elementary school, helped us implement the fifth-grader ride free program, in which we give between 600 and 800 fifth-graders unrestricted access to the mountain as long as they’ve had at least one year’s experience on the mountain.

The program is worth about $50,000 to $80,000 a year. The reason we chose fifth grader is because, by that age, they’re strong enough and physically able enough to handle it and they are also a little more mature. The other thing we found was it was a great way to get their parents who used to ski or snowboard [the program requires an adult presence] back on the mountain. 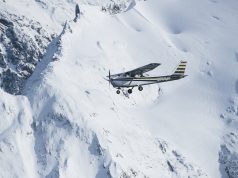