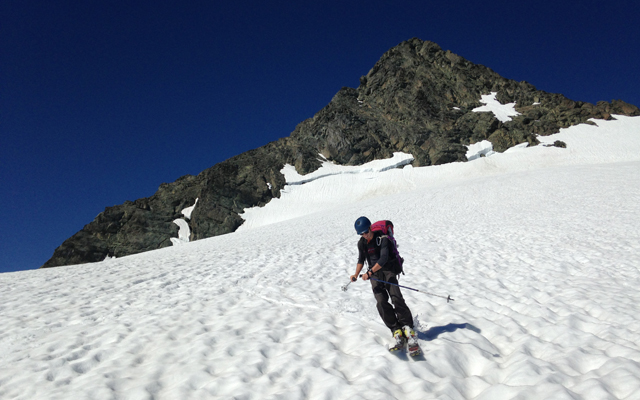 Climbing and skiing Mt. Shuksan in a day

Like me, Paul was new to glacier travel, so when he looked down at a hole in the snow that seemed to open into a cavernous void, he froze and said, “Whoa.” I was 30 feet behind him, struggling to catch my breath midway up a 2,000- foot slope of steep snow. It was our second attempt on Mt. Shuksan’s White Salmon route. We had skis on our backs, crampons on our boots and a doubled over half rope tied into our climbing harnesses.

“There’s a snow bridge here,” Paul said. I adjusted my stance. I knew that if Paul fell into a crevasse, the force of his fall would pull me off my feet towards the crevasse in the blink of an eye, and I’d have to stop us both by bearing down on my ice axe. While holding his suspended weight, I’d then have to dig a T-shaped hole and build an anchor point off my snow picket, before rigging a secondary anchor and a z-pulley, prepping the edge for extraction, then hauling him out.

Crevasse rescue is a complicated process, and although I could explain it step-by-step to a guide, I’d never actually tried it. As Albert Einstein said, “In theory, practice and theory are the same. In practice, they are not.” Midway up Mt. Shuksan, hours from the nearest human, was the absolute wrong place to put crevasse rescue theory to the test.

Paul backed off the hole and then adjusted his route to avoid the bridge. It was early July. We were on a keyhole of the route where giant crevasses loomed to our left and right. We continued cautiously up the steepening face.

Our goal was to climb and ski Shuksan in one day from the White Salmon Lodge at Mt. Baker Ski Area. Nothing could have prepared us for the heart-of-darkness, 10-hour bushwhack the route entails in mid-summer. Despite the snow bridge, our climb up the White Salmon glacier was by no means as harrowing as the walk to its base. Not even close.

The overland distance from the base of Chair 8 at Mt. Baker Ski Area to the snowfield leading up to White Salmon Glacier is a little over a mile. We crossed that mile four times on two attempts, taking different routes each time. Our fastest time across that mile? Two hours. Our slowest? Five hours.

The most direct route takes you across the north face of the Shuksan Arm. In mid-summer, the route involves multiple creek crossings and lots of bushwhacking through tortured underbrush and tree wreckage in this avalanche-prone area. With skis on your pack, any forward progress requires an acrobatic dance as you bend forward to get the tips of your skis under some branches, sideways to slide them into a slot between trees, then back as you shimmy under a fallen tree, then forward to climb over another fallen tree. You repeat the process again and again. Occasionally, you break into a band of snow and triumphantly jaunt across, only to confront an impenetrable wall of brush on the other side.

This was the route we took on our first Shuksan attempt, and it took us a couple of hours. We got a late start that day and we botched the route by following the first snowfield we encountered to a deadend below the north side of the Fischer Towers. The walk out was worse than the walk in.

We tried the White Salmon Route one more time, but we plotted a different route to the correct snowfield. We reasoned that thickly forested areas would be easier to travel through, because tall trees prevent the growth of a thick understory. On the basis of that theory, we decided to go directly downhill from Chair 8 under what looked like a thick canopy of tall Douglas firs. Once we hit the valley floor, we would follow White Salmon Creek all the way up to the snowfields.

We got a 4 a.m. start after sleeping in Paul’s truck outside the White Salmon Lodge entrance gate. We hustled along the fire road to Chair 8, then dove into the forested slope. Our undergrowth theory was correct. As long as we stayed under tall trees, the going was manageable.

We reached the valley floor in good time, but then the fatal flaw of our theory hit us like a branch to the face. We found ourselves in a swath of undergrowth about a football field wide that followed the floodplain of the creek for a solid half-mile. The shrubbery was thick, the landscape was tortuous and the going was infuriatingly slow. 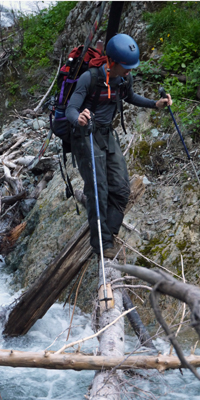 After much effort, we reached the lower snowfield, but in order to get to the correct snowfield we still had to cross a final section of thick underbrush on a steep slope. This 300-yard patch of diamond-leaf willow was the roughest section of the day. We were grabbing handfuls of thorny devil’s club and blackberry bushes to haul ourselves up the slope, unconcerned about cuts as we contorted to navigate our unwieldy packs through the angled branches.

Finally we made it to the snowfield below White Salmon glacier and strapped on crampons to begin our first real climbing of the day around 9:30 a.m. Four hours and one crevasse later, we stood on a saddle below the Upper Curtis Glacier. It was 1:30 p.m. – our turnaround time. You don’t want to hang out under a glacier in the afternoon, when the sun’s heat sends ice chunks calving downslope. The ski down would have to suffice as our only reward for the day. It was great skiing, but the joy was short-lived and completely diminished by the prospect of the bushy trek back to the car.

The White Salmon Glacier route completely schooled us, twice. To do it with skis in one day, you’d have to go at a different time of year, be in better shape than we were, or bring machetes.

We still wanted to climb and ski Shuksan in a day, so we came to our senses and set our sights on the Sulphide Glacier route – Shuksan’s easiest avenue of access.

Due to conflicting schedules, we had an absurdly narrow opportunity for our third attempt. We got to the Shannon Ridge trailhead parking lot at 2 a.m. on July 26, laid our sleeping pads on the ground next to the car and took a two-hour nap. We were on the trail by 4:15. Uncertain how long the climb would take and unwilling to risk a third defeat, we hiked fast.

The trail follows Shannon ridge before leading up and over a saddle around the terminal spur of Shuksan’s southwest ridge. The Sulphide Glacier lies just beyond. We were there by 10 a.m., and realized we could take our sweet time for the rest of the day. The weather was gorgeous – 75° and sunny.

The western edge of the glacier leads cleanly over a series of rolling hills to the horizon, as opposed to its eastern edge, which is littered with crevasses and icefall. We crested a rise, ate some food, donned boots, skis and skins and tied into our rope. Mt. Baker dominated the landscape to our left, and Mt. Shuksan’s summit pyramid loomed ahead. Below to the left were Mt. Anne and Lake Anne, and behind us were Blum, Hagan and Bacon mountains.

The skinning was fast and enjoyable, and before long we were at the base of Shuksan’s rocky summit pyramid. Several other parties passed us going down. We met Jim from my home state of New Hampshire who gave us good beta for the summit climb.

When we reached rock, we dropped our skis and bags and headed up the main gully with climbing gear. The sketchiest part was the transition from snow to rock. Since rock is  darker than snow, it absorbs heat from the sun and melts the snow around it. When rock meets snow at an angle, the gap (called a randkluft) lies beneath the snow’s surface, and can be very deep. For us, avoiding the randkluft was a matter of one giant step.

As Jim had promised, the route up the gully was easy and well protected. Rappel stations at regular intervals kept us on route, and after the first belay we realized we could both climb at the same time with a piece of protection placed into the rock here and there. A set of nuts was the only pro I brought, and it was more than sufficient.

After four pitches of simul-climbing, preceded by two failed attempts and a long day of hiking, we stood on the narrow summit, a wind-scoured pile of boulders that drops off on all sides. It’s a grand and wild place that instills a sense of respect at odds with the rush of accomplishment.

We took some time to name as much of the surrounding landscape as we could – and there was a lot to see. Most immediately were the glaciers skirting Mt. Shuksan. Straight below to the north lay the Hanging Glacier, that iconic jumble of blue ice often glimpsed between clouds on the way up Chair 8 (at Mt. Baker Ski Area). We could name the Price, Curtis and White Salmon glaciers. We could see Baker, Rainier and Adams, Glacier, Snowking, Johannesburg and the Pickets to the south. American Border, Sefrit and Ruth to the north. Challenger, Fury and Terror to the east. And hundreds of others I couldn’t name.

Paul could name many more than I could. A native Utahan, Paul first became enamored of the North Cascades while a student at Pacific Lutheran University in Tacoma. He would scope out his dream climbs and ski descents on Google Earth between classes.

Years later, after earning a nursing degree in St. Louis, he returned to Washington, this time to Bellingham, with his girlfriend Synneva. He got a job at Island Hospital in Anacortes and became a familiar face among the select crowd on the Shuksan Arm on snow days.

Paul still has many more North Cascade descents on his bucket list, but they’ll have to wait, as he and Synneva are moving to Salt Lake City for school. I’m losing a couple of good friends and a ski partner, but the upshot is a tremendous excuse to go ski in Utah, where the snow is (reputedly) the consistency of champagne fizz.

The snow on Mt. Shuksan on July 26 was months old and melted into beach-ball-sized dimples called sun cups. Imagine an ant skiing on a golf ball. It was late afternoon when we clicked into our skis, and by then the snow was soft. We skied in a leisurely way down the rolling glacier, pausing frequently to assess our route and avoid a few crevasses. There were two flat sections that required walking, but within an hour we had skied to the last of the snow.

We were back to the car by 7 p.m. after traveling 18 miles in 15 hours. I was knackered and sunburnt on my lips and the backs of my knees. The drive back to Bellingham was a sleepy and hungry one, and we called ahead to Boomer’s Drive-In to place an order for burgers, fries and milkshakes. Those tasty calories were much appreciated, and a great cap to a long day on the mountain. X

A recreation pass from the U.S. Forest Service is required to park here, and a backcountry permit is required for overnight stays. There are many great campsites along the route.