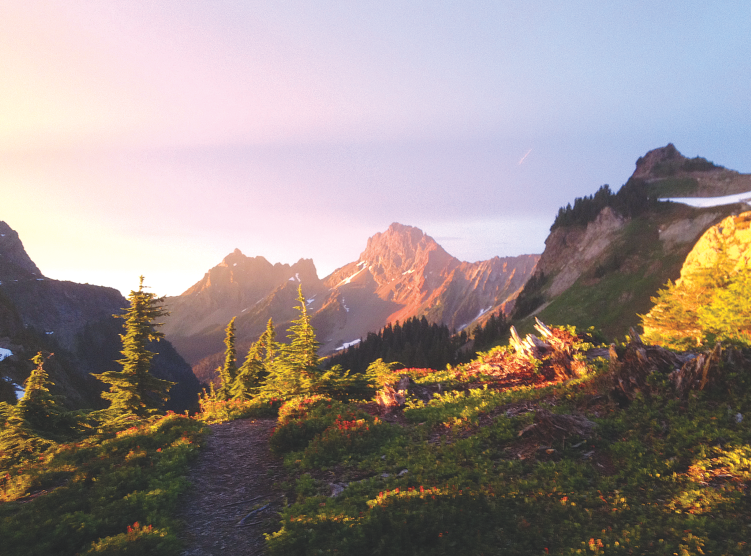 The dark tower of rock that makes up the summit of Tomyhoi Peak scared me. I had been moving toward the dark tower for more than 24 hours, intent on climbing it, when I finally saw it from the false summit. One glance at the loose, rocky downclimb and exposed scramble back up was enough to change my mind.
I took my pack off and sat on a flat rock. I had lots of reasons for giving up: a persistent mountain goat was following me, I was alone, and I didn’t think the view would be much better from the real summit.
But I still wanted it. I traced the green valley of the North Fork of the Nooksack River with my eyes as far west as I could follow it. I couldn’t make out Bellingham, where I had started by bicycle the day before.
I began a new job in July, which meant a summer month of long days in an office. I wasn’t adjusting well –  I hadn’t had a full-time job or even a lease in a year. I had spent the previous two summers writing a hiking guidebook, which meant week-long road trips and hikes in every corner of the state, pit stops to swim in icy rivers, sleeping outside and plenty of time to talk to myself.
For my first three-day weekend, I needed to remind myself that the world is a big place, and there’s more to it than my desk. The world feels bigger on a bicycle, so I decided to pedal my blue Cannondale into the mountains to climb Tomyhoi Peak.
I was lashing an ice ax onto the 40 pounds of gear teetering above my bike when my landlord pulled up and reminded me to transfer the bills to my name. After a trial run around the block and 40 minutes on the phone with the utility and garbage collection companies, I got on my bike and rolled down Sehome Hill.
Bike trips into the mountains are becoming a rite of passage. Trip reports that start by bicycle in Seattle, Vancouver, or Portland and go to the nearest volcano are increasingly common on the internet, and many adventurers go from doorstep to summit in a single push. That wouldn’t work for me – I’m not an athlete. I allowed two-and-a-half-days to make the trip and I stopped whenever I wanted. I didn’t even make it out of Bellingham without stopping for a potato burrito. 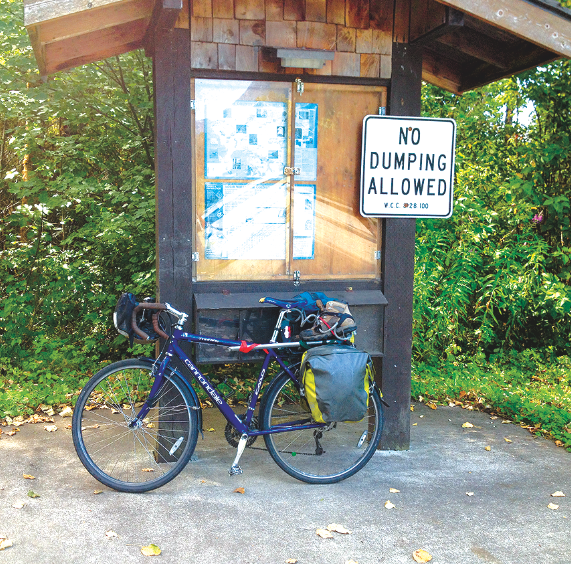 I smiled as I passed the last of the stoplights on the Mount Baker Highway and continued east. The next 35 miles passed in a long grind of rubber humming on asphalt, chain grease on my legs, sweat in my eyes and cars rumbling by. Frequent stops punctuated the pedaling. I ate candy bars on park benches, bought lots of snacks, chugged water in roadside grass patches and took a nap on the bench outside Graham’s Store in Glacier.
There are hills before Glacier, but nothing like the hills east of town. I alternated between slowly climbing in granny gear and losing hard-won elevation in short bursts of speed that always ended at the bottom of another hill. Sweat, salt and road gunk accumulated on my skin until I couldn’t stand it anymore and stopped to swim at a bend in the Nooksack River late in the afternoon.
I didn’t have a plan, but I hoped to make it to a camp in the tarns below Yellow Aster Butte that night. I had a quart of water left. Continuing without filling my water bottles meant committing to reaching the cold pools surrounding the camps at Yellow Aster Butte that night, 4.5 miles of steep gravel road and 3 trail-miles away. I thought about my filter at the bottom of my overstuffed pannier, and then a horsefly chased me back to my bike.
My tires hit gravel a half-hour later. My heart raced as I struggled to keep my momentum going. My skinny touring tires skittered out on loose gravel and I gave in to pushing my bike. When the road finally leveled out, I dropped my bike, drank the last of my water and laid down in some fir needles on the side of the road. I don’t usually lie down when I need a break, but it soon became routine.
When I got up, I managed to stay on my bike for a mile and a half, as the road leveled out. Douglas firs and dusty thimbleberries gave way to talus fields and clumps of subalpine fir and mountain hemlock as I worked my way uphill. I was looking for a place to lay down again when a mound of brown fur emerged from some slide alder and crossed the road 100 yards ahead. It took a while to recognize the mass of fur and muscle as a bear because I’ve never seen a bear, or anything else, move so fast through such jagged talus.
I was rejuvenated without even laying down. I was out of water, I smelled like sweat and dust, and I’d already seen a bear—I found what I was looking for and I hadn’t even made it to the trailhead yet. I wondered about what I’d missed in the past while riding in cars to trailheads.
The sun was near the horizon when I shouldered my pack and started up the trail. I lay down once more on the hike up, exhausted in a good way, and enjoyed the beginning of a pink sunset. I laughed at gardens of wildflowers and snow patches glowing gold, and finally reached camp and water after sunset.
I was still tired the next morning, but eager to get higher in the mountains.
Tomyhoi Peak is a broad mass of mountain. Its summit falls away for thousands of feet to Tomyhoi Lake on one side and Damfino Creek on the other, but an easy trail follows a broad ridge most of the way to the top, sniffing out the easiest terrain like a hound on a scent.
I followed the trail to its end at a patch of snow beneath several rocky pinnacles. Somewhere along the way a goat started following me. If I faced the goat, he pretended to turn and leave. But if I turned my back to him and hiked away, he followed. When I reached the false summit and faced the exposed scramble to the summit the goat was close behind. 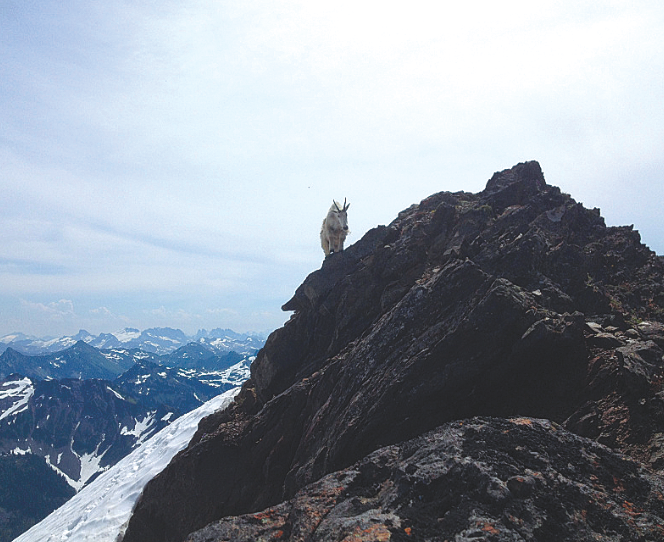 That’s where I decided to give up and sat down on a rock.
I tossed pebbles in the direction of the goat and stashed a few fist-sized rocks in my pocket, but he finally disappeared for the last time. So, as usual, I laid down for a
power nap.
I thought about all the other summits blocks I’d scrambled up that looked scarier from below then what they turned out to be, and I took another look at Tomyhoi. I decided to explore a little farther. I wouldn’t try for the top, I told myself, but I’d go as far as I felt comfortable.
It started easy, and the rock wasn’t as loose as it looked from below. As I got higher, it got harder to ignore the air below me, but the climbing was reasonable, so I continued up. The scramble ended earlier than I expected it to, and I saw a few feet of trail leading to one last short scramble to the top.
Two days later I was back at a desk. But I had the view from the top (which was only a little better than the view from the false summit) seared into my retina.   x 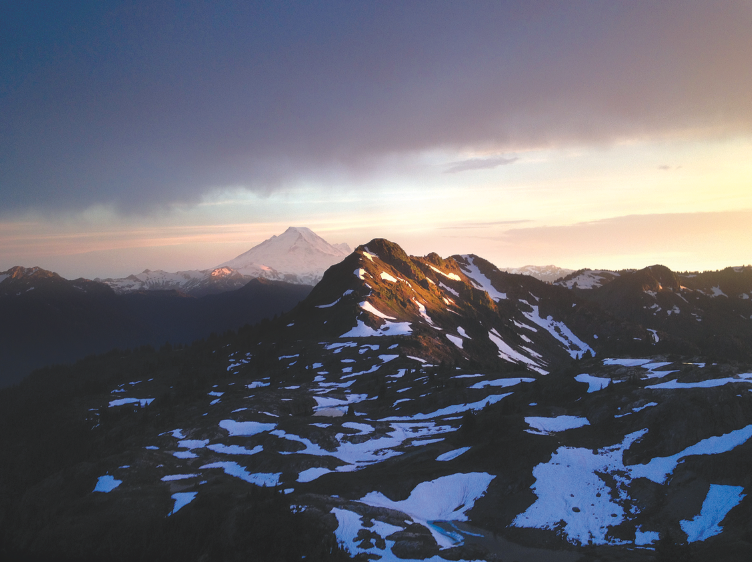