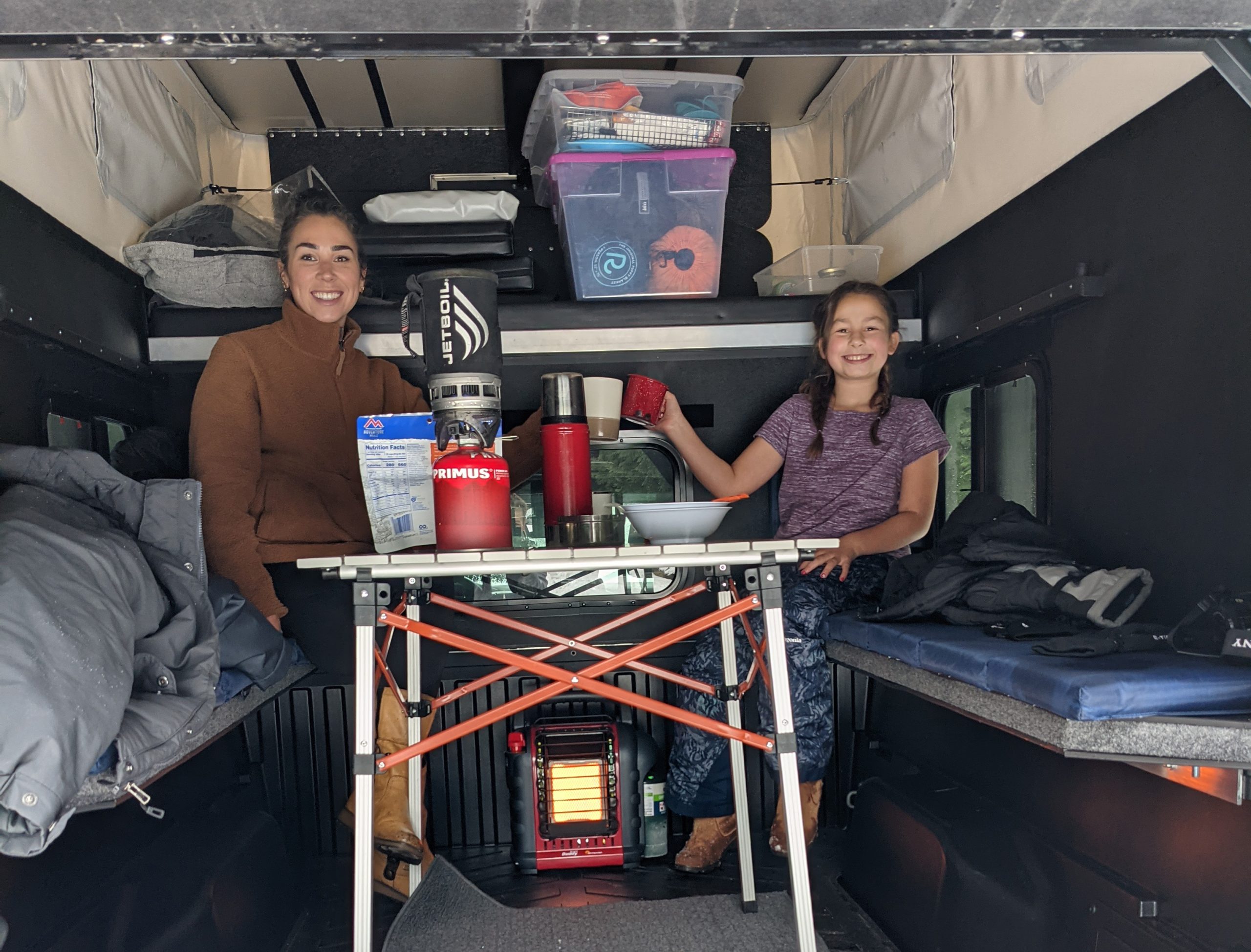 Story and photos by Tony Moceri

The Pacific Northwest is a camper’s paradise giving those of us that like to leave our houses behind endless options to explore new locations and return to old favorites. Whether sheltered amongst large fir trees, eating your dinner next to a rushing creek, or bedding down with a bay view, the opportunity for stunning places to make a temporary home are endless.

As a family of three, and sometimes four if Milly the poodle tags along, camping is one of our favorite things to do. Whether part of a more extensive road trip or heading out for a night or two, camping produces an instant vacation allowing us to live differently. TV is replaced by the dance of the fire and our hands hold whittling sticks instead of electronic devices. Camping opens a world of culinary options that never seem quite right at home, and nowhere else does a stiff drink or a cup of hot coffee taste better than when sitting around the campfire.

With so many of our favorite family memories having been created on camping trips, we do all we can to fit in as many trips as possible only to be reminded that the other part of living in the Pacific Northwest is the weather which, at best, can be unreliable, and at worst, can be downright nasty. We have tried various camping options to extend the season and pushed the limits on what may be considered enjoyable camping weather. 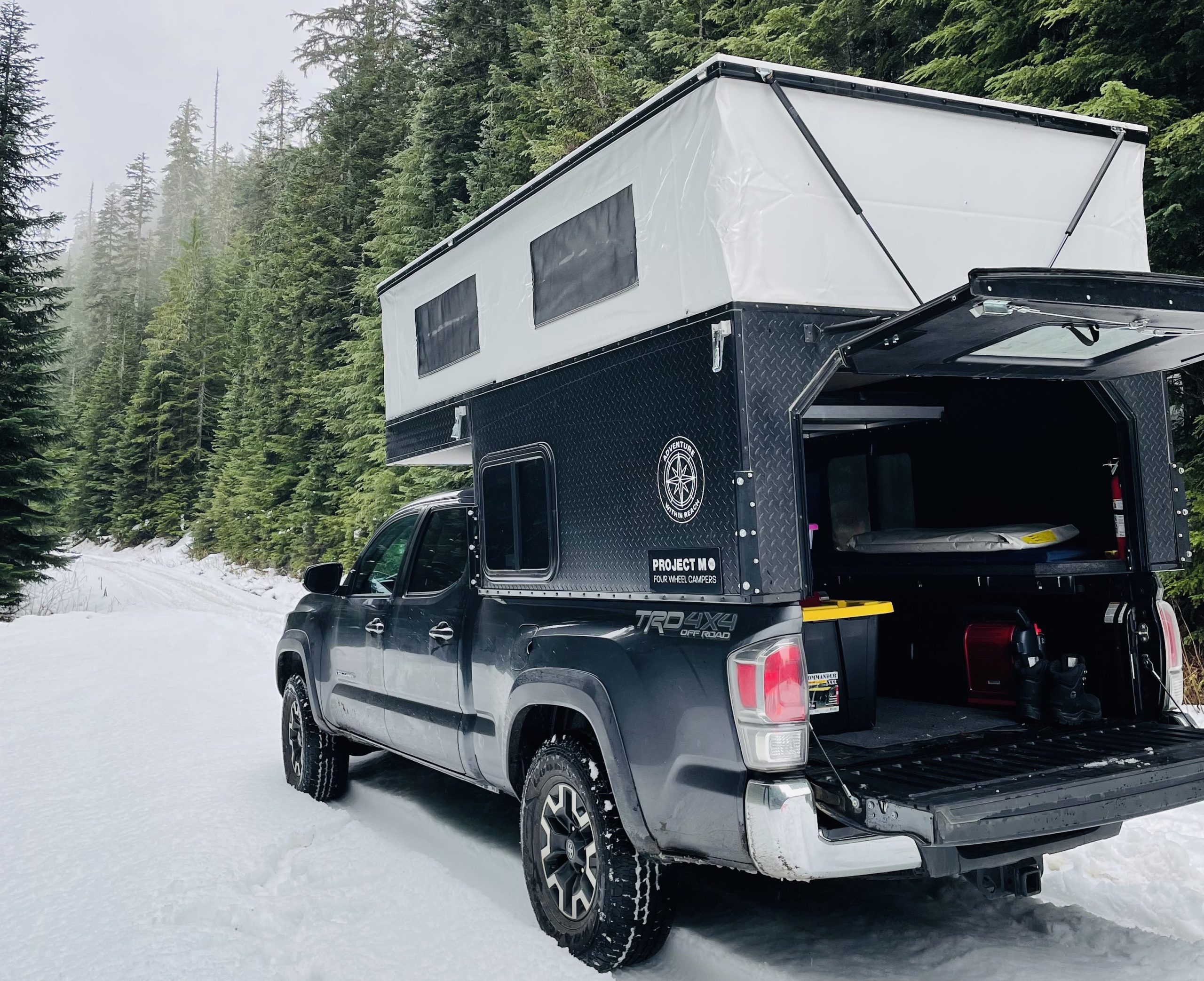 We have tested our rain fly in Mazama, strung up tarps at Fort Ebey and hunkered down during thunderstorms in Leavenworth. We don’t learn quickly, but we do learn. Over the years, we have modified the way we camp and added gear to make the less-than-ideal camping season, or the surprise summer storm, a little more comfortable. Our current camping setup is centered around a Four Wheel Camper Project M, which lives on the back of our Toyota Tacoma. Truck canopy by day and pop up camper by night, this camper doesn’t come with many creature comforts, but it does give us a dry place to hang out and sleep when the weather turns on us.

With snow falling on Mt. Baker and the surrounding areas, we decided it was time to see if our new setup would actually extend our camping season deep into fall and winter. Armed with a Little Buddy propane heater, sleeping bags, Rumpl Blankets and a thermos of hot chocolate, we loaded up and set off to find a snowy place to call home.

The weekend prior, we had seen snow covering the foothills surrounding Mt. Baker, so we planned to find a fairly low elevation spot to set up camp, put our sleds to work, and sit around watching the snowfall. As it turns out, Mother Nature had other plans. The day we had planned to go camping, something called an atmospheric river was occurring. I’m no meteorologist, but that appeared to mean a ton of rain accompanied by a dramatic increase in temperatures. This weather pattern washed the snow from the foothills, swelling the forks of the Nooksack River to impressive levels.

Not to be deterred, we figured we could both find snow and hopefully escape the rain if we could get high enough. As we drove out the Mt. Baker Highway, with windshield wipers going, it was clear we would be pushing well past the town of Glacier to find snow.

Approaching the WSDOT maintenance shed, there was still no sign of snow, so we turned up the road that leads to Twin Lakes. Knowing this road gained elevation quickly and that snow prevented access for much of the year, I assumed it would be a safe bet. Within a mile, we began to see patches of snow and were quickly driving in sloppy slush. We passed a couple of vehicles on our way up, but as the gravel road quickly became nothing more than slippery compact snow and ice, the odds of finding more people willing to risk getting stuck became lower and lower. Now in four-wheel drive and our truck occasionally slipping, my wife, daughter, and dog not so subtly urged me to stop. I chose to push on a bit wanting to find a better spot and eager to test the truck’s capabilities. We found a place where the snow was 12-18 inches, and there was room to both turnaround and set up camp. 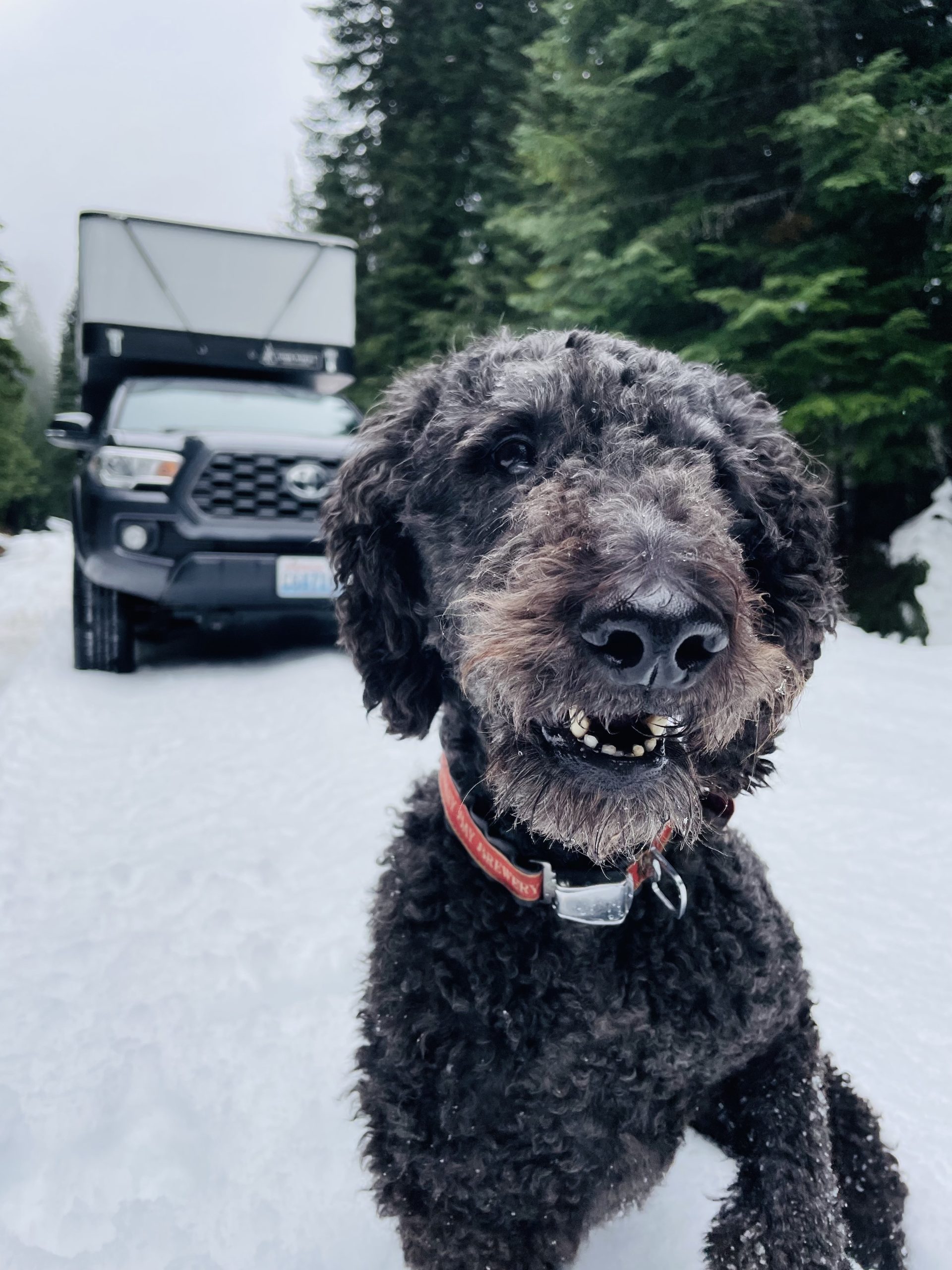 The snow was a combination of wet and crusty, but hey, it was snow. We threw snowballs and played on the sleds having the kind of fun one can only have in the snow. As we played, the rain began to fall then turned into an all-out downpour. We sheltered in the back of the truck and cracked open the thermos, being warmed from the inside by the hot chocolate and from the outside by the propane heater as we listened to the rain, played games, and ate freeze dried meals cooked with our Jet Boil in water pouring off the hill.

There wasn’t much exploring as the conditions were, frankly, not great, but with no service, there were also no distractions to keep us from just being where we were, and sitting on a mountain in the snow is never a bad place to be. The warmer than expected temperatures meant that our bedding was plenty to keep us warm, not needing to use the propane heater past bedtime.

This was a quick trip, but a memorable one, as who doesn’t remember being trapped with their family on a mountain in the rain accompanied by thoughts of getting stuck in the snow or sliding off the road. Having had our fill of this wet adventure, we packed up, lowered the top, and began the slippery descent toward Mt. Baker Highway. Once my wife’s nerves settled from the drive down, we started planning our next adventure as we headed toward the comforts of home.   x

Tony Moceri is a freelance writer who loves to get out and explore the world with his family. He shares his journey @adventurewithinreach and tonymoceri.com.