When the nonprofit Whatcom Day Academy closed its doors in 2015, Andy Basabe, a language and environmental education teacher at the school, took his skills on the road. He started Vamos Education, an organization that uses the outdoors as a classroom for teaching Spanish by pairing language learning with environmental education.

“It’s easier for kids to learn a language by having hands-on communication tasks than by sitting in a classroom,” Basabe said. Parents, it seemed, approved and enrollment grew.

Basabe’s vision has expanded since then. Vamos Education became Vamos Outdoors Project, and by combining English language learners and Spanish learners in the outdoors classroom, he’s found a symbiotic way for both groups to learn from each other. But it took a while to get there.

As Vamos Education grew in the first years, keeping the language component of the environmental education program got increasingly difficult.

“I had kids enrolling without any Spanish background and kids with years of Spanish, making a top-down language program in the mountains nearly impossible,” Basabe said.

Inevitably, English dominated the school’s backpacking trips, where complex logistical information needed to be disseminated and understood by a group.

In 2017, Basabe took a year off from Vamos and moved to Spain to teach English. All the while, he contemplated how he could create a more balanced immersive language experience. It became clear that it was important for the students to be speaking Spanish with each other, not just the instructor.

“I realized that if I wanted to have Spanish as a component of environmental education, I would need to curate that at the student-to-student level,” he said.

Arriving back home in Bellingham, Basabe set to work. Amy Brown, a fellow environmental educator who is now a Vamos Outdoors Project board member, asked if he’d ever worked with underserved populations. No was his response.

A light bulb went off for Basabe.

“If I could raise money for Spanish speaking ELL (English Language Learning) youth for programming, then I’d be working with a group where we could create Spanish-English language interaction that truly went both ways,” he said.

With this idea as its compass, the Vamos Outdoors Project was incorporated as a nonprofit in April 2018 to work with kids from six to 18 and it quickly started gaining steam.

Basabe, now executive director, reached out to families about applying for a scholarship. He specifically reached out to the ELL teachers who knew students best and also worked with support staff at affordable housing communities where a number of students reside.

This past summer, Vamos Outdoors Project conducted its first trips, backpacking trips that largely proved Basabe’s hunch that student-to-student language learning would be a success. “It was really cool watching as these kids got to learning about each other,” he said. “More often than not the language would shift from mostly English to mostly Spanish by the end of the trip.”

One reason the outdoors provides such an appealing language classroom is that everything comes with context clues.

“It’s how a lot of people learn language,” Basabe said. “If I’m teaching kids to set up a tent in their non-native language they can physically look at what’s going on.”

That’s true for everything from establishing a camp kitchen to planning a route using topographic maps.

Now, Basabe and his board members are developing year-round programming to supplement summer backpacking trips.

“We realized that multi-day backpacking trips was a lot to ask, so we reached out to organizations that would be interested in hosting [day] programs locally,” he said. 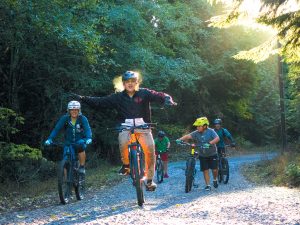 Vamos Outdoors Project formed partnerships with YMCA, Vital Climbing Gym, the Whatcom Mountain Bike Coalition and other local groups, and has plans to work with the Bellingham school district this spring. Now, Vamos offers numerous local programs for students – swim lessons at YMCA, bouldering at Vital and mountain biking at Galbraith – each of which offer unique contextual circumstances for language immersion.

“A lot of ELL kids or first language Spanish speakers will graduate high school able to respond to Spanish but they don’t speak it and they can’t read or write it because they didn’t receive a Spanish education,” he said.

It’s been a busy year for the Vamos Outdoors Project. And like many newly formed nonprofit organizations, its to-do list is long. Nevertheless, its team is excited about the building phase.

“The biggest hurdle to 2019 is that we have to grow to meet more demand,” Basabe said.

Inspired by the allure of the North Cascades, Benjamin Whitney moved to Bellingham from Vermont. He writes about people, place and community, and is excited to contribute to the creative wellspring that surrounds the alpine.