Story and photos by Jefferson Morriss

As most people know, the San Juan Islands are a breathtaking island getaway. What most people don’t know, however, is that some lesser-known islands in the San Juans are open to the public and accessible even if you don’t own a boat. It may take a little more effort and planning but getting off the beaten path is worth it.

Vendovi Island, just south of Lummi Island, is one of a number of islands in the San Juans not served by Washington State ferries. Visitors can reach it by private boat or by one of several water taxi services. 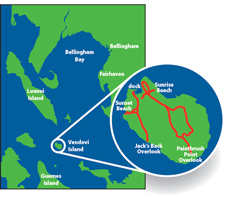 The San Juan Preservation Trust purchased Vendovi in 2010, saving it from future development and opening it to the public in the process. The 217-acre island is open to visitors from 10 a.m. to 6 p.m. from April to September, and features six beaches, four trails and – since it has no deer, rabbits or raccoons – flourishing flora.

The island’s namesake is a Fijian chief, Ro Veidovi, who was captured by a U.S. ship for the murder and cannibalization of a whaling crew in 1833. The U.S. Exploring Expedition, led by Charles Wilkes, brought Veidovi back across the Pacific and he remained on board as the ship surveyed the San Juans. Along the way, one of the surveyors apparently named the island after the chief, with an Anglicized version of his name.

Upon arriving at the island’s protected north cove, where charters and private boats can tie up to a 70-foot dock, the first thing you’ll notice is an unassuming caretaker house. Elaina and her fiancée Thyatira are the island’s caretakers from April through September. With trail maintenance, gardening and keeping up the off-grid systems at the house, they seem to stay pretty busy.

“You give up a few luxuries but the reward is so much greater,” Elaina said about living on Vendovi.

If you’re lucky enough to arrive on a day without charter boats, you’ll likely experience the things I did on the trail: silence and solitude. When nobody else is around, your senses become more in tune to the world around you: the crunch of your boot on trail debris, sword ferns brushing your legs and the shrill call of eagles flying over the island.

One of the four trails on the island leads to the sublime Sunset Beach. Once used by the native Salish as a shellfish dumping ground or “midden,” Sunset Beach is littered with white shells that clatter and break beneath your feet. While there, explore the small rock outcroppings scattered along the beach. Check out the interesting driftwood piled up and admire the colorful madrona trees sticking out from the shore. 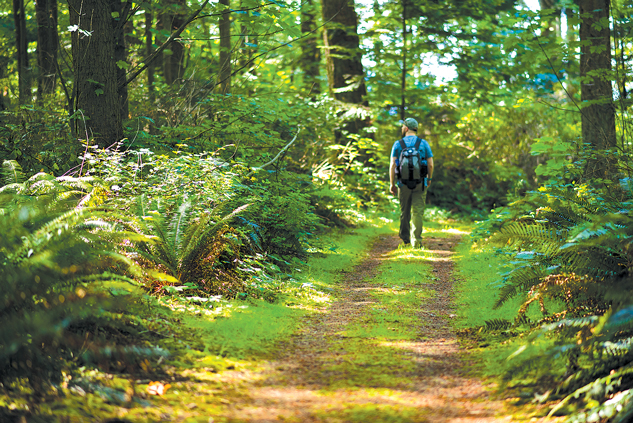 The longest of Vendovi’s trails, Paintbrush Point, is a 1.8-mile hike that leads through dense forest. The trail skirts one of the island’s high points before emerging at a small but charming overlook with views of the islands.

On your way back, you’ll notice a small cemetery for John Fluke, who owned the island from 1966 to 2010. Explore the old sawmill near the residence, which sits in silent decay after many years of disuse, along with a shop and garden area. 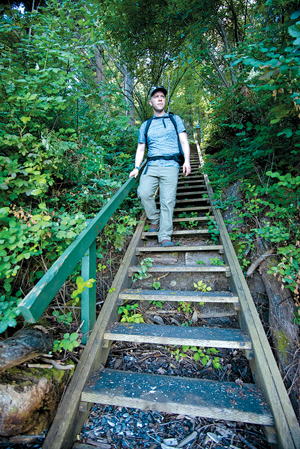 A quarter-mile from the caretaker house, a wooden staircase leads to Sunrise Beach. I walk down to the beach to find an oil tanker sitting idle between Vendovi and Samish Bay as smaller crafts sail by on the breeze. Trees lean out over the pebble-lined beach as my feet sink in with every step. Not a soul to be seen or heard, silence and solitude – perfection.

For more information about the island, visit sjpt.org.

Vendovi Island is accessible by private water taxi from Anacortes, Bellingham and Orcas Island. Water taxi services that currently provide access to Vendovi include Island Express Charters, San Juan Cruises and Outer Island Excursions. Kayakers can reach it by paddling for about an hour from Guemes Island, just south of Vendovi.

Jefferson Morriss is a Mount Vernon-based photographer. After relocating to Washington state in 2001 from the mean streets of Bismarck, North Dakota, he picked up his first camera and never looked back.