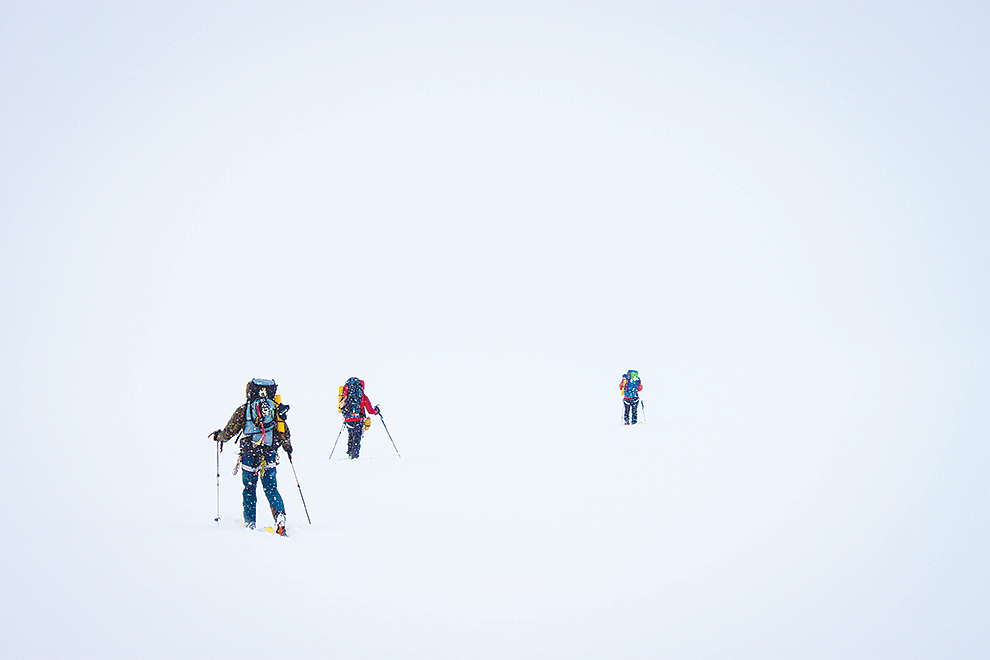 We’d been slogging for hours out of the Little Yoho Valley after finding the Stanley Mitchell Hut full. Darkness approached and our sole car was 46 kilometers away at Bow Lodge, on the other side of the mountains we had just crossed over the past four days. We left the Richard and Louise Guy Hut early that morning (a day ahead of schedule), hoping to beat an incoming storm. We beat it, only to find that backcountry skiing is not the fringe activity it once was; the Stanley Mitchell Hut would be packed that night even without us and the few residents hanging around midday were less than enthused by our presumptuous arrival.

“You know, you’re early enough to make it out to the cars by dark tonight,” offered one hut denizen. We hung our heads, shouldered our packs, and kept moving. It was another 25 kilometers to the road. Sometimes things don’t go according to plan.

As is the case with most trips, things started according to plan four days earlier. Four of us drove from the Skagit Valley and stayed at the excellent hostel in Lake Louise the night before we started. We brought just one car, reasoning that if we got out early on the last day we shouldn’t have a problem sending our most presentable looking team member (Steve) hitching back to the vehicle. Just to make sure, Scott prepared a cardboard sign (“Bow Lake” on one side, “Wanna Party?” on the other) on the drive up, and stashed it with a six-pack at the exit as we drove to Lake Louise. The forecast looked OK, at least for a few days, and we went to bed buzzing with anticipation. 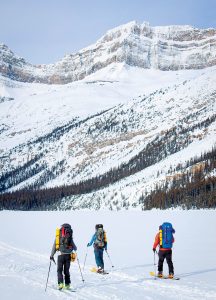 Traversing from Bow Lake and the Wapta hut system across the Waputik Icefield to the Little Yoho Valley is known as the Bow-Yoho traverse. Until recently this 50-kilometer backcountry ski trip (typically done in four or five days) was a good deal more serious than the nearby classic Wapta Traverse, which is well supported with a hut system. There wasn’t a hut between the Bow and Stanley Mitchell huts until 2016, meaning the few parties who did the trip had to camp midway along the Bow-Yoho. That changed with the completion of the Richard and Louise Guy Hut, built at 2,600 meters near the base of Yoho Peak. We eagerly booked nights at Bow, Guy, and Stanley Mitchell huts for April, having fond memories of nearby terrain from several trips to the classic huts of the Wapta.

We started our trip with an uneventful ski into the Bow Hut – the approach was well trod and avalanche conditions were benign. The hut was quiet when we arrived but soon a large guided group from the Alpine Club of Canada trickled in. They were due to spend a few days at the Bow Hut and we were glad we were slated to leave the next day for the long crossing of the Wapta/Waputik Icefields to the new Guy Hut.

“Left! … Left! … Griffith! Left!” So went a good part of day two as we blindly felt our way across the ice towards Mt. Collie, my rope mates yelling navigation instructions from behind. It is amazing how hard it is to keep a straight line when you can’t tell sky from ground (and how spooky it is). Was that slight dip the start of a big drop, a sagging snow bridge, or just a small dip in the snow? Your mind races with every undulation of the snow surface. Situations like that make you extremely glad for GPS-equipped phones loaded with maps and apps like Gaia. With our pre-loaded routes it was relatively easy to keep out of the icefalls and on an efficient route, despite traveling with almost zero visibility for hours. Still, that didn’t change the fact that being in the lead was not fun.

As we approached Mt. Collie, the clouds began to lift and stock in our venture was trending up. We cached our gear in the snow and set up towards the impressive cornices on the summit ridge. As we got closer, it became apparent that much of the ridge was double-corniced (overhanging snow on both sides of the ridge). Kit boldly offered to unrope and explore the first part of it, and none of us objected. He quickly realized it was much worse than it looked from below and backed off, asking, “One of you guys want to take a look?” Um, no thanks.

A run back to the cache with light packs was our consolation prize for the day. That, and arriving at the brand new Guy Hut to find it empty. Bright, heated, well-insulated, and thoughtfully laid out, the Guy Hut is an excellent addition to the already impressive hut array in the Canadian backcountry. Even better, day three dawned clear, calm and sunny, and we didn’t have anywhere to be except right back at the same hut that night. Yoho Peak’s north slope is near the hut and had stable, untracked, boot-top powder, so we spent the day lapping great snow and admiring the scenery. Scott and Kit even rallied for an after-dinner lap. I watched from the ridge near the hut, marveling at the light. It was one of those windless, magical, winter evenings in the alpine, where the still, golden air makes it seem much warmer than it actually is.

The great weather ended on day four and we hurried to pack and ski over Isolated Col in flat light and flurries. Our experience a few days before on the Waputik Icefield made us wary of another no-visibility day in the alpine. We hoped to find a few empty bunks at the Stanley Mitchell Hut, but you know how that went. We instead got a crushing slog out to the road, more than 32 kilometers from the Guy Hut.

The adventure wasn’t over. After the long ski out, we still had to get the car. It was getting dark as we sent Steve out to the highway with the sign (which side would he choose?) and some money to try his luck at hitching a ride back to our car. Most likely it would be a two-hitch ride, distinctly raising the possibility that he would get stuck in Lake Louise for the night and we would have to bivy at the road.

Half an hour or so later, I saw a Parks Canada truck coming down the dead-end road to the trailhead. I waved it down and explained the situation to the driver, a road maintenance worker. Could he maybe give the guy on the highway with a sign a ride, ideally all the way to Bow Lake, I asked.

Let me get this straight: Your car is at Bow Lake, and you don’t have a ride. And this was your plan?

“Let me get this straight: Your car is at Bow Lake, and you don’t have a ride. And this was your plan?” he said.

“I’ll see what I can do,” he replied and sped off. That was the last we would see of him.

An hour and a half later, just as it was getting dark, Steve flew into the parking lot. We had all our clothes on, had eaten most of the remaining food, and were starting to prepare for some suffering.

How did he get there so fast? It turns out Steve hadn’t waited long at the highway when a young woman in a beat-up Toyota sedan stopped to give him a ride. She said she could only take him as far as Lake Louise, but did he mind if she first stopped and rolled a smoke? Sure, “Beggars can’t be choosers,” he thought. Her dog, unimpressed, barked in Steve’s ear while they sat on the shoulder. However, just as she was getting ready to pull back on the highway, a truck pulled up behind her, with lights flashing. A man walked up and tapped on her window. As she rolled it down, he looked right past her and said to Steve, “I heard you were looking for a ride to Bow Lake. Get in.”