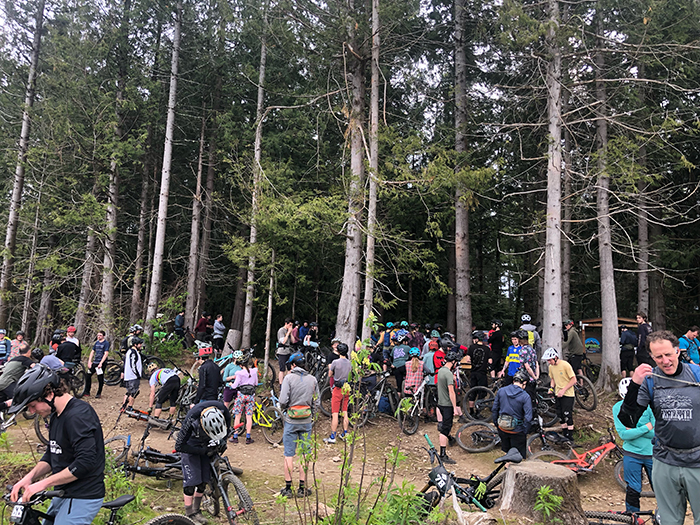 Story and photos by Harrison Winkel

I could feel the buzz of excitement spread through town as group texts lit up my phone. “Are you racing Wednesday?” “Wanna go up to heckle?” “Heard there’s free beer!!!”

Wednesday nights during the summer are my favorite day of the week and for good reason. Every week through the end of August, the Whatcom Mountain Bike Coalition (WMBC), in partnership with local businesses, put on the Whatcom World Cup. It’s a time when the local riding community gets together in the woods to race down trails, heckle their friends and crack a cold beer together.

Races cost $15 for WMBC members, which is $30 annually and goes to support trail maintenance and programming, and draws everyone from professionals to families. This season has 14 races scheduled. Last year had 12. Almost every single one will be raced on a new course either on Galbraith Mountain or at the Waypoint Park pumptrack.

Having a variety of courses makes it so everyone has a race that suits their strengths. Some take race night seriously, with friend group bragging rights on the line, while others are there to simply have a good time and dress up in all manner of costumes. Don’t be surprised to see an astronaut or ballerina pass you.

Sponsored by Fanatik Bike Co. and Kulshan Brewing Company, the series started off on SST. With over 200 people registered, it was the largest on record. Riding up to the start, it was fantastic to high-five people I hadn’t seen in a while. This first race also had the largest women’s field I’ve seen at the series; super cool to see more ladies from town get involved. 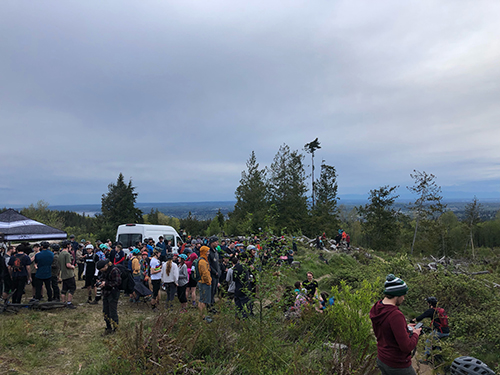 Racing starts at 5 p.m. with youth racers, followed by the women then the men at 5:30 p.m. Fast times are determined by how well one links together the trail features of that night’s race course. Overcook a corner or jump and you will find yourself off the trail.

With little braking, wide-open corners and a touch of pedaling, SST is a trail that suits my riding style. At one mile long, it took about three and a half minutes to complete. I had a clean run down and managed to improve on my time from last year. I had a few friends race and it was awesome to cheer them on with everyone else after I finished.

The second race, Pump Track to Eagle Scout, was muddy. Staying upright and on trail was a challenge. I ended up in the brush a couple times after overcooking a couple of jumps. A friend came out for the first time this season and absolutely crushed it in the women’s field, finishing fourth.

Most weeks a crowd will be shouting some much-needed midrace encouragement along the trail. While the racing is just one part of what makes the world cups so fun, the aprés with friends is the cherry on top. Food and a healthy amount of beer greets everyone after every race. Yum.

Seeing where I stack up against my friends and others in the community is fun, but more importantly, attending the world cups is where I can feed off people who share the same passion for community, mountain biking and having a plain ol’ good time. Meeting new people who share the same passions as I do is energizing. Wednesday summer nights are about the magic that is the community-driven Whatcom World Cup race series. No matter what place you come in, what bike you ride, what you wear or if you just come watch, you’re a part of what makes this community so magical.

Originally from Wisconsin, Harrison Winkel moved to Bellingham to attend Western Washington University. When he’s not working at a local bike shop or brewery, you can find him out in the woods doing what he’s passionate about.