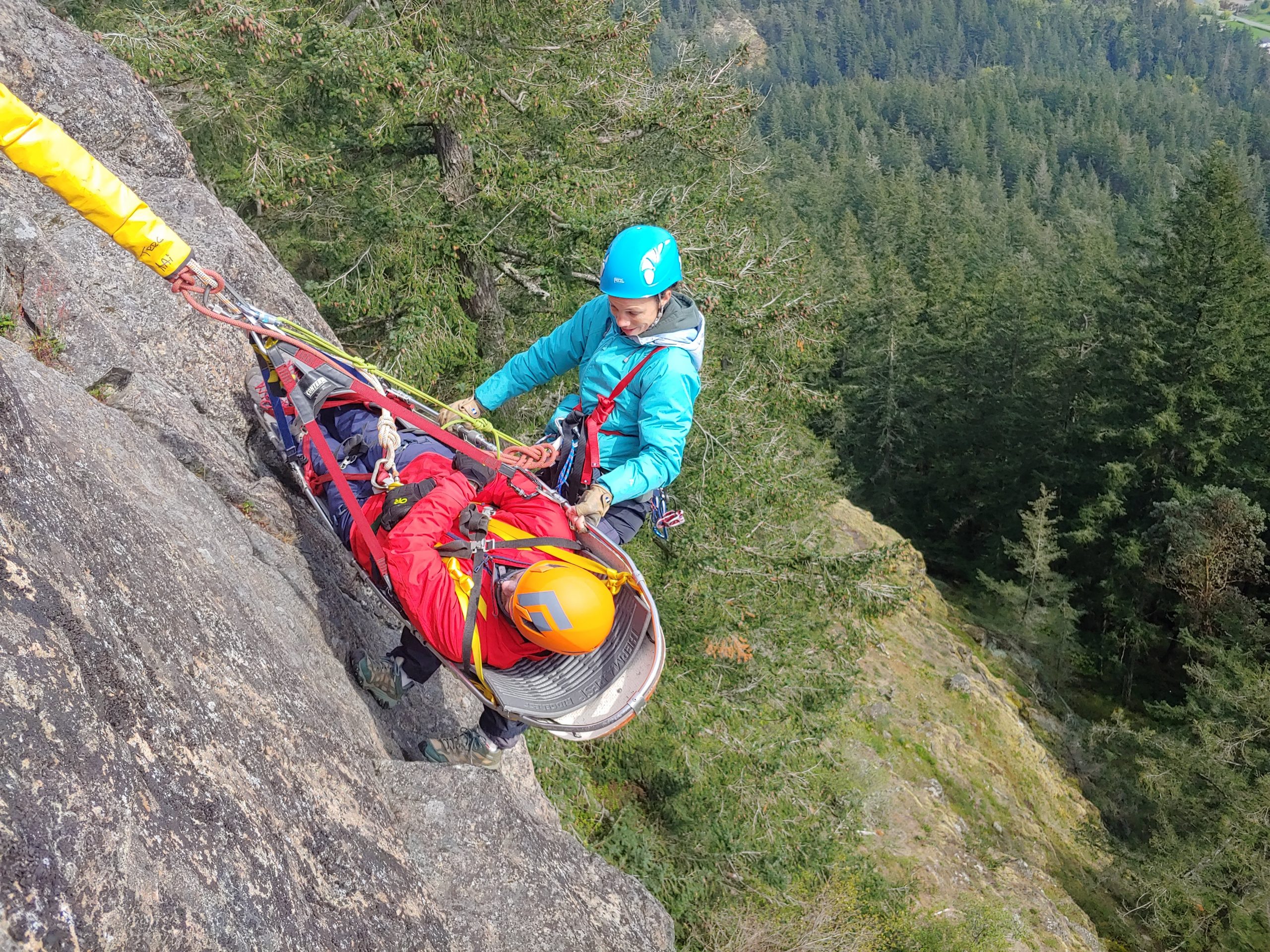 You’re sliding down a pristine snow slope, miles from the trailhead.

That’s when it happens. Your binding pops, your ski shoots away, you spin around and fall. You slide uncontrollably into the rocks. The impact as you slide over jagged pieces of granite is jarring. It radiates through your body.

But finally, you come to a halt.

Your initial assessment is that you’re a bit beat up. Your clothes are ripped, you’ve got scrapes on your hands and legs, but you seem to be in one piece.

But then you try to stand up. And that’s when you realize that you are not – in fact – fine. There’s tremendous pain. Your leg doesn’t look right. The line along your shin is no longer straight and smooth. There’s a viscous purple and black bulge where the bone is jagged and broken beneath the skin … and you’re still miles from the car …

This is when the clock starts to tick.

The call for help comes from the backcountry in a variety of ways. Sometimes, a party is able to get a phone call out. Sometimes they’re able to send a transmission with a satellite messaging system like a SPOT or an inReach. Sometimes a runner comes out with information for rescuers. And sometimes there’s no information. The party is just reported missing or late.

In nearly every case, the information that is provided to rescuers is incomplete. A 911 operator is seldom fluent in backcountry knowledge. Important information can be left out that might only provide a sketch of the reality on the ground for the rescue team.

Who is going to respond is yet another question. If you are in a national forest, the most common response will be facilitated by a sheriff’s deputy and a volunteer mountain rescue team. If you’re in a national park, professional backcountry rangers will likely respond. The ranger team may request a volunteer mountain rescue unit for assistance, or it may facilitate the rescue on its own. It depends on the location and the situation.

If a person is injured at 2 p.m. and the party is able to get a call out immediately, then the rescuers will likely be notified by 2:30 p.m. They’ll meet at 3:15 p.m. and then drive to the trailhead. From there, they’ll make their way up the trail and in to the injured patient. A fast backcountry response will take place in under four hours from the time of notification. More commonly, the rescue team will not arrive for five hours or more from the time of notification.

But what about a helicopter…? 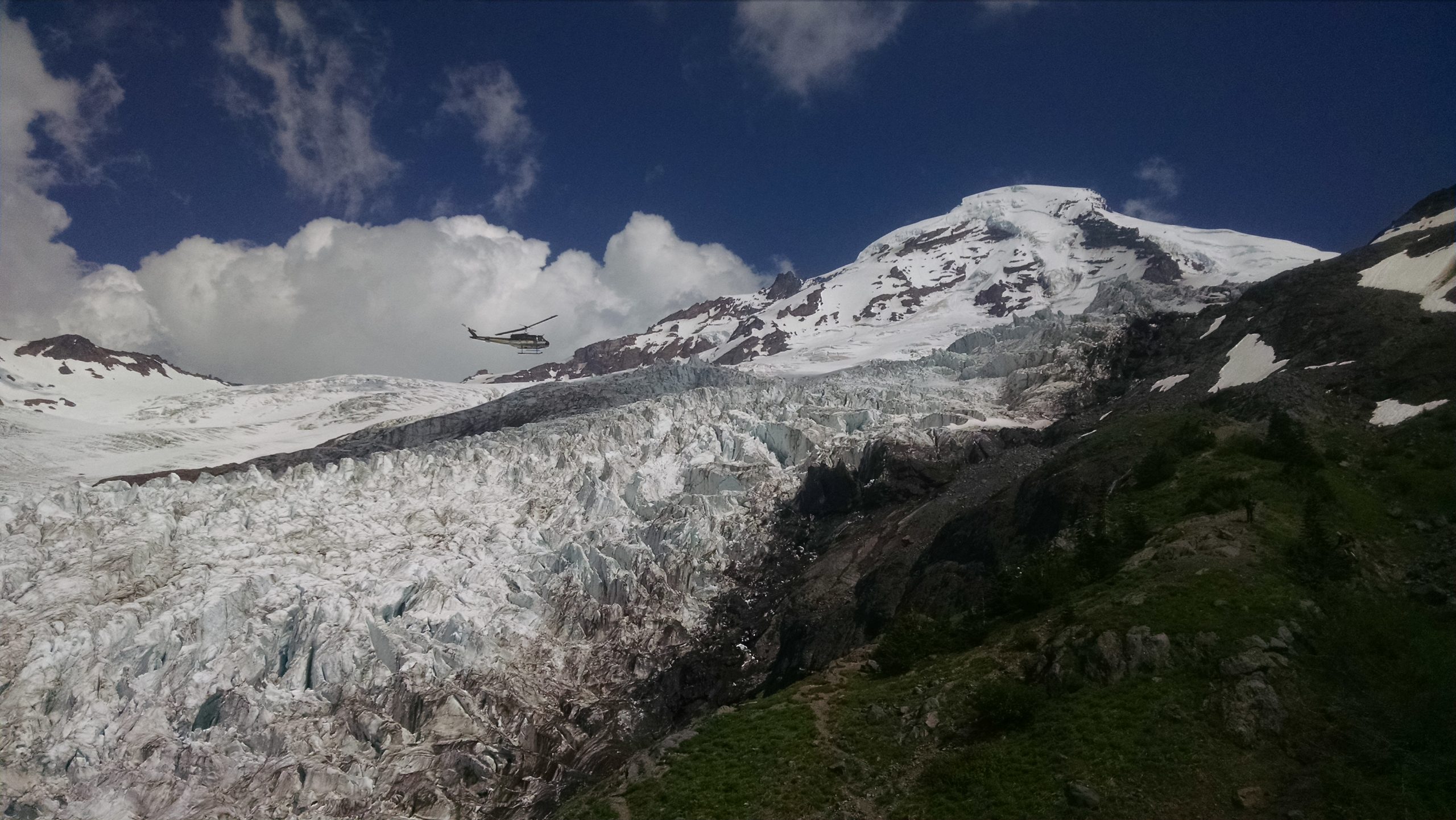 A helicopter response is not a given. It’s often cloudy and helicopters cannot fly in the mountains when they cannot see. Mountain pilots are specially trained. And the most ideal helicopters have a hoist. This is used to lower and haul rescuers and patients in complex terrain where landing isn’t possible. For these reasons, there are only a few helicopters that are regularly used in northwest Washington for mountain rescue operations, with the most common being a Navy helicopters based at Naval Air Station Whidbey Island.

The Navy helicopter pilots are very good, as are their mountain rescue technicians. But there is only one helicopter and one team there that will respond. If the helicopter is already in use, then local authorities will try to line up another one. But even if they are able to wrangle another helicopter, it will certainly be coming from farther away.

The combination of scarcity (there aren’t that many helicopters that can do this kind of work), and hazard (sometimes these things crash), lead incident commanders to try to avoid helicopter requests. They most commonly request air support when they believe that a patient’s life is in danger.

When a ground team arrives at a patient several hours after notification, that’s often when the real work begins. 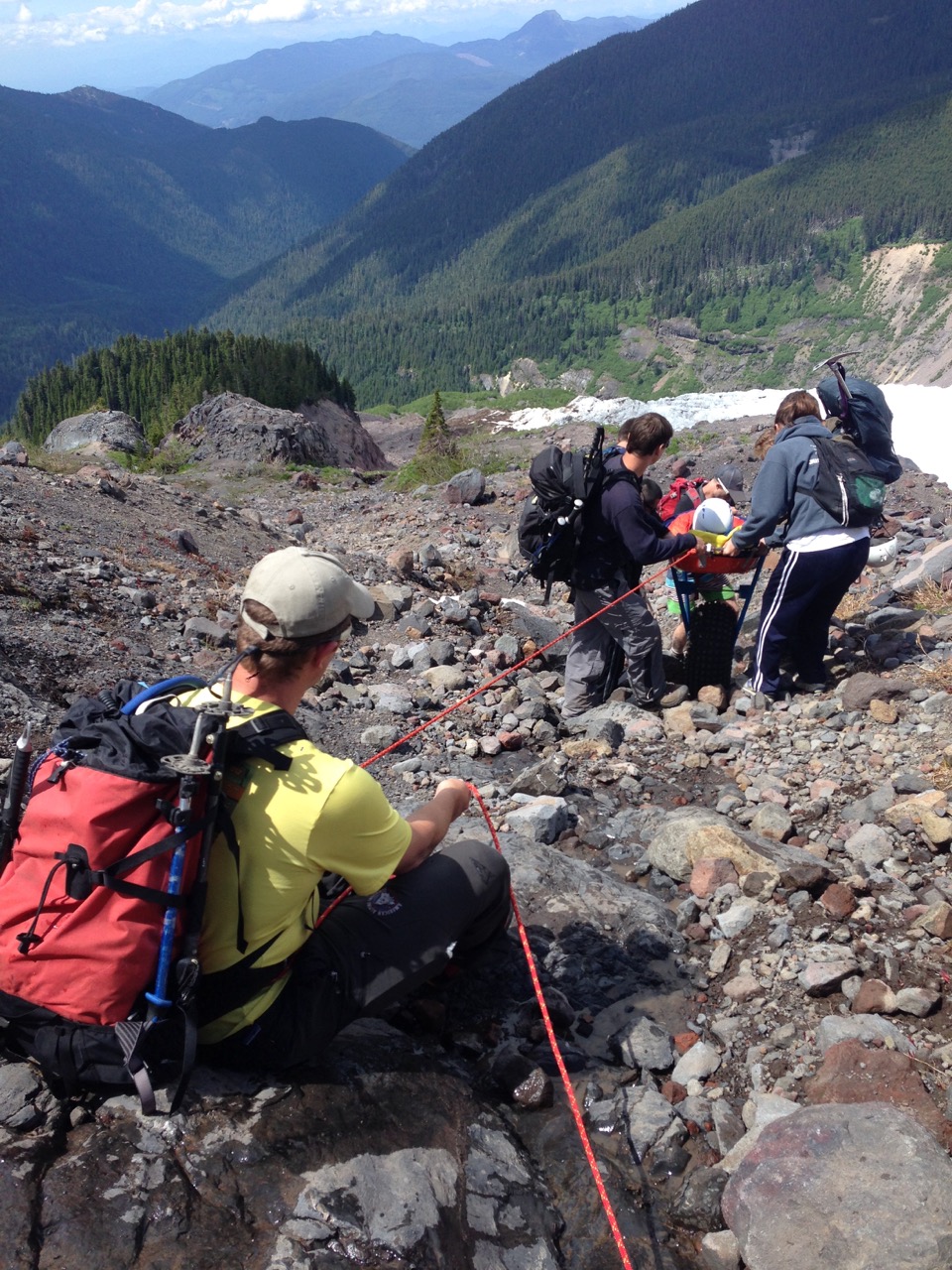 The unfortunate truth of a mountain rescue is that it is incredibly slow. As such, when the team arrives, they find one of two things: They find a stable patient or they find a deceased patient. Due to the speed of rescue, it is incredibly unusual to arrive and save a patient with some kind of heroic medical maneuver. If that happens, it generally comes from the patient’s backcountry partners, not from rescuers who arrive hours later.

If a team arrives and discovers the patient is on a cliff face or in a crevasse, or the patient is pinned by a tree or a rock, the team will have to set up a technical rescue system. The Bellingham Mountain Rescue Council (BMRC) regularly employs ropes, pullies and mechanical advantage systems to retrieve stuck, stranded or injured parties that cannot be extracted any other way. This can be dramatic, but it can also be painstakingly slow.

As with everything else, wheeling a patient on a steep, rocky or heavily rooted trail can be incredibly slow. The movement of a wheeled litter requires a lot of rescuers. There is usually at least one on either side and on each end of the litter. Often, there are a dozen other individuals who swap out in these duties, as a ground rescue is incredibly taxing.

It should be obvious, but a ride down the trail in a wheeled litter is not comfortable for the patient. In addition to the uneven terrain the patient has to deal with along with their injury, it’s also common for the patient to become nauseous. The combination of the litter’s movement and the trees above can create a car-sickness type response in many patients.

The descent to the trailhead on a wheeled litter is also quite long. With a strong litter team, the evacuation still might only move one to two miles per hour down the trail. 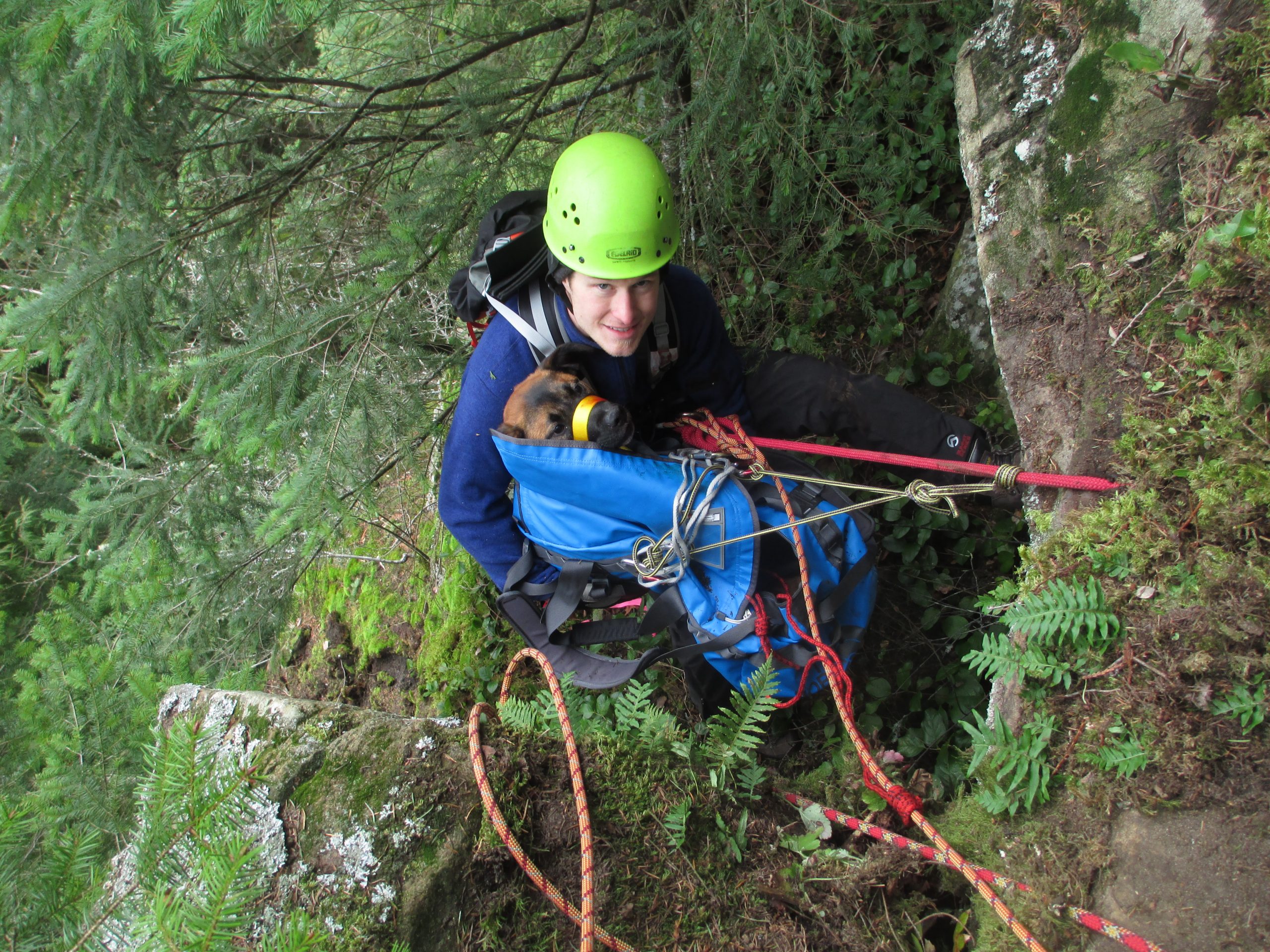 On the plus side, most rescues in Washington state are free. Rescue teams are populated by dedicated volunteers. It is part of the sheriff’s department’s responsibility to facilitate these types of rescues, as it is for the National Park Service. And the cost of Navy helicopter rescue is placed squarely in their military training budgets.

In Whatcom County there are several different backcountry Search and Rescue (SAR) units, and they are all looking for dedicated volunteers. If you have some backcountry skills, and you want to give back to your community, check out the sidebar for more information.   x

There are several units under the heading of the Whatcom County Search and Rescue Council.

Whatcom County 4×4 Unit – A unit populated by those with high clearance vehicles and/or off road vehicles. Their focus is on the transportation of SAR teams, equipment transport, vehicle search and vehicle recovery (vehicles that have fallen off Forest Service roads).

Summit to Sound – Specializes in ground searches while overseeing specialty teams. The specialty teams include those with ATVs, horses and dogs. In addition to classic ground work, the team also provides swift water search and rescue/recovery, as well as people power for evidence searches.

Bellingham Mountain Rescue Council – Skilled in mountain terrain including on snow, glaciers and in steep/technical terrain that requires the use of ropes and other high-angle equipment. The unit runs and/or assists with many regular SAR operations, but its focus is on technical rescue.

Whatcom County Dive Rescue – Focuses on underwater search and recovery, as well as assistance with evidence searches. The team uses both scuba equipment, as well as supplied-air breathing equipment that allows for communication with the surface.

Whatcom County Snowmobile – Specializes on the transportation of personnel and equipment in snow environments.