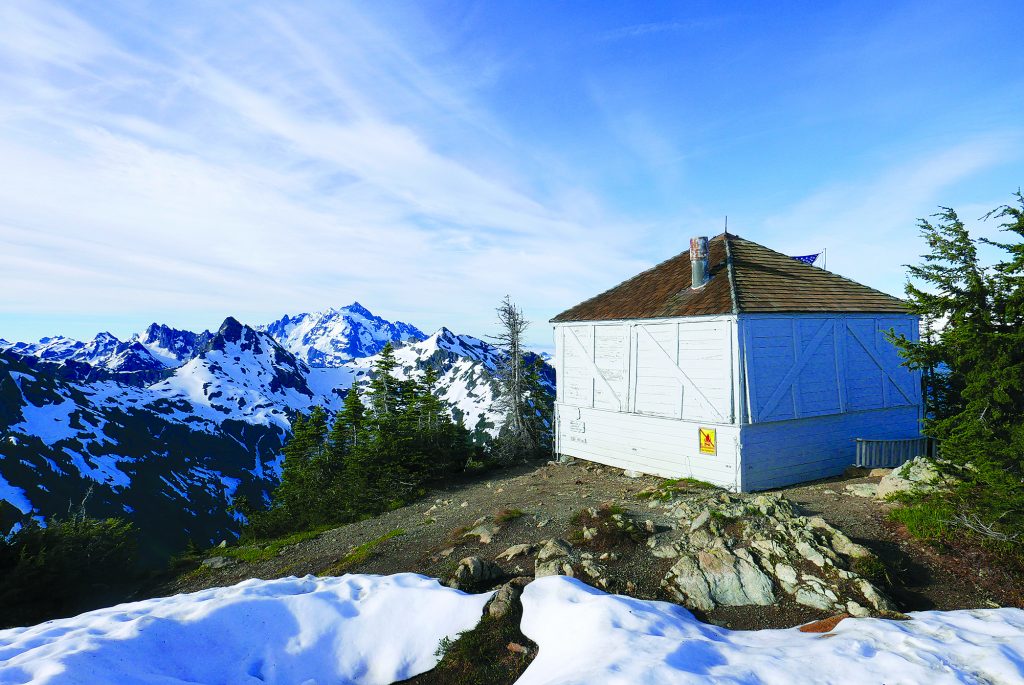 For backcountry skiers and snowboarders, Winchester Lookout was a rare winter shelter in the North Cascades. Roughly nine miles and 4,500 vertical feet away from the nearest road – the Mt. Baker Highway – the 1935 fire lookout sits atop a peak in a world of snow and ice, with wilderness skiing in every direction.

Over the past decade, as backcountry skiing grew, Winchester became a destination for skiers seeking solitude and powder. But Winchester Lookout wasn’t built to withstand winter use – it was built for spotting fires in the summer months. Fire watchers staffed it every summer until 1966. Come September, the fire watcher would hike back to civilization after securing storm shutters and a storm door to protect the lookout’s expansive windows from winter weather.

Citing damage from previous winter use, the U.S. Forest Service and the Mt. Baker Club, a volunteer group that maintains the Winchester Lookout, decided to lock the structure for the first time. It closed in November and will reopen in June or when conditions allow, according to the Forest Service website.

The most recent damage was caused by storm shutters being propped open and the storm door left unsecured, said David Inscho, the lookout’s volunteer caretaker for the past 11 years.

When enough snow piles up on top of the shutters, they rip loose, breaking the hinges. On their way down, the shutters have slammed against skis and snowboards leaning against the windows and shattered the glass, Inscho said.

In addition to broken hinges, windows, shutters and storm doors: traffic from ski boots has kicked the door threshold to bits while ice blown inside has caused other damage, Inscho said.

“Each time the hinges are ripped loose it causes deep structural damage. Winchester can’t afford that,” Inscho said. “This locking of the lookout should be a step toward ensuring the place endures and remains available for everyone during the season for which it was designed.”

Between 1929 and 1935, ranger districts across the U.S. completed two to four lookouts a year, financed by the Civilian Conservation Corps and other New Deal programs that put unemployed men to work, according to “Lookouts: Firewatchers of the Cascades and Olympics,” by Ira spring and Byron Fish.

At the peak, Washington state had more than 600 lookouts. Out of dozens of lookouts in the Mt. Baker Ranger District, only four remain, said Barb Richey, a wilderness/trails manager with the Mt. Baker Ranger District. The lookouts at Church Mountain, Easy Ridge, Dock Butte, Dillard Point, Anderson Butte, Sauk Mountain and Excelsior Point have been removed, burned or left to deteriorate.

The Mt. Baker Club restored Winchester in 1982, after decades of neglect and vandalism; in 1987, it was added to the National Register of Historic Places. It’s also on the National Historic Register. Its purpose is not to maximize use for powder seekers, but to be preserved as a reminder of a time when fire watchers lived all summer on top of a mountain, scanning the horizon for smoke and crouching on a lightning chair when storms electrified the landscape.

Winchester Lookout is the only lookout in the district to close for winter, Richey said, and she doesn’t know of damage at other local lookouts.

Even though they were never designed for winter use, some lookout designs can handle winter travelers better than others. Winchester is especially bad at handling winter use because its storm shutters can be propped open but aren’t robust enough to withstand the weight of snow.

The club and the forest service decision to lock Winchester for the winter came only after years of pleading with users to not prop shutters and to keep the storm door secured proved unsuccessful, said Inscho.

Hopefully the other lookouts in the district won’t suffer Winchester’s fate.