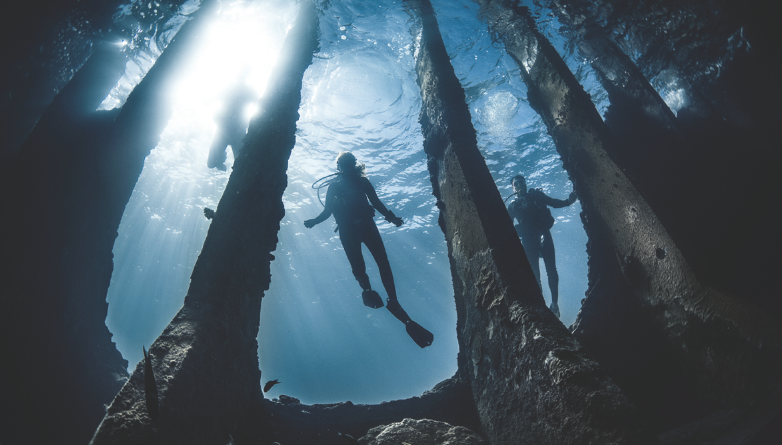 The edges of descent

You’ve skinned the Mt. Baker backcountry and split-boarded up and down the icy razors of the North Cascades and Coast Range. You’ve carved the first tracks on a bluebird day – epic! If you enjoy the feeling of exploring vertical terrain, you might try an adventure that extends the vertical edge in the opposite direction.

Scuba divers drop a hundred feet or more over the edge into a cold, dark sea to explore local shipwrecks. Like backcountry skiing and boarding, wreck diving puts you in an alien, cold and frightening but totally beautiful world. And, just like hanging out in avalanche terrain, your choice is to either do it right or do it deadly.

Local shipwrecks have a fascinating and sometimes terrifying allure. They make excellent artificial reefs and are home to a dazzling array of northwest marine life. They also offer an unparalleled opportunity to explore parts of the ship rarely accessible to non-mariners. Imagine peering down the rusting barrel of a large-caliber, ship-killing cannon, only to notice you’ve disturbed an indignant and very grumpy giant Pacific octopus. And “giant” means just that; adults typically weigh about 30 pounds with an arm span of 14 feet. Larger individuals weigh up to 110 pounds with an arm span of 20 feet, and there have been reports of specimens weighing 600 pounds with tentacles stretching 30 feet across. Octopuses are able to change the color of their skin to match their surroundings.

The inland seas of the northwest offer some of the premier wreck diving in the world. A recent trip to Nanaimo, B.C. with Washington Divers provided an opportunity to explore the wrecks of the HMCS Cape Breton and HMCS Saskatchewan. We set out on a rare sunny November day, but after donning our gear and rolling into the water, we quickly fell away from the warmth and sun of the surface.

The descent down the buoy chain was a freefall through waving layers of misty green.
Ten feet, 20 feet, 30 feet … down and down into the darkness. Suddenly through the gloom, the skeleton of the Cape Breton’s radar mask beckoned.

We landed amid-ships and headed aft, watched by the wary undersea skeleton crew that now mans the ship. Feather stars covered the ship’s rails, and a quillback rockfish peeped out of a deck ventilator. At 90 feet, cloud sponges clung to the aft-deck wall. At 110 feet my dive buddy fumbled a light, accidently dropping it deep into the darkness of the flooded engine room and startling a pair of wolf eels. Diver Pete started to penetrate the wreck to retrieve it, but realizing that we were all beginning to feel the effects of nitrogen narcosis, we waved him off. Nitrogen narcosis feels like being drunk, and navigating the dark bowels of a ghost ship while “narc’d” is not a good idea.

Reaching the end of our allowable bottom time, we worked our way slowly up the buoy chain. Hanging suspended for a safety decompression stop to prevent the “bends,” we checked out the tiny skeleton shrimp and other creatures encrusting the ascent line. The safety stop provides extra time to allow nitrogen to pass out of your blood and into your lungs to be exhaled. Otherwise, the nitrogen can form bubbles inside the body – one symptom is joint pain. The bends can kill you if you come up too fast, so warmth and light could wait.

The HMCS Cape Breton, a World War II “Victory” ship, was sunk in spectacular fashion near Nanaimo in 2001. At a keel depth of 142 feet, she lays at the absolute limit of “no-deco,” or no-decompression, diving. After lazing in the sun for the required surface interval, we dropped back to visit the grave of her nearby sister ship, the escort destroyer HMCS Saskatchewan. In the green shadows, we descended along fields of orange and white plumose anemones, swimming scallops, fleets of rock fish, the grumpy giant Pacific octopus and a lurking cabezon at least as long as a diver. 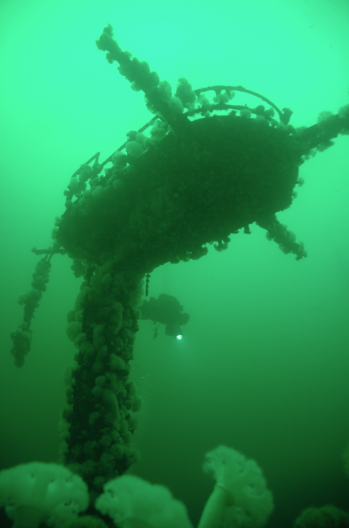 The Salish Sea offers a wide variety of intentionally sunken ships and true “ghost wreck” sites. Other B.C. sites include the SS Capilano, which went down north of Texada Island in 1915; the side-wheel schooner Del Norte, which foundered between Galiano Island and Valdes Island in 1868; even a sunken 737 airliner near Chemainus. Intentionally sunk “artificial reefs” are rare in the U.S. and most shallow wrecks have been removed. As a result, local U.S. waters hold only a few score of large, historical wrecks. But skilled divers still drop onto the likes of the burned Point Possession ferry deep off southern Whidbey Island, or risk cold depths and tricky currents to visit the legendary Alaskan cargo ship Diamond Knot, rammed by a freighter near Port Angeles in 1947.