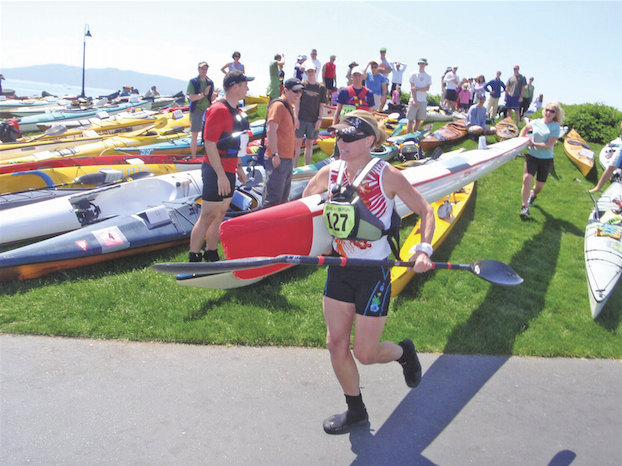 Back from the brink

Whatcom County women maintain their division in the Ski to Sea

Ski to Sea is a seven-leg adventure relay race from Mt. Baker Ski Area to Bellingham Bay. The race began in 1973 as a means of showcasing recreational opportunities in Whatcom County, but is a continued legacy of the much older Mt. Baker Marathon, which took place in 1911, 1912 and 1913. Racers ski, run, bike and paddle in various forms for more than 90 miles every Memorial Day weekend, ending at a finish line festival in Fairhaven.
The Whatcom County Women’s Division of the annual Ski to Sea race avoided being eliminated this year after local athletes overcame a new policy that requires each division have a minimum of 10 registered teams. A fixture of the modern race, the Whatcom County Women’s Division has contributed a popular storyline every year because it showcases the drive and talent of local female athletes. A Ski to Sea newsletter in late September last year warned racers that divisions with fewer than 10 teams would be subject to elimination. This new policy, meant to promote competitiveness within each division, endangered the Whatcom women’s division, which had only four teams last year.
This year, the division will have between 11 and 15 teams, said Mel Monkelis, executive director at Whatcom Events. The dramatic increase is due to the grassroots efforts of racers Beth Hartsoch and Heather Nelson of team Kulshan Cycles who, after hearing about the 10-team minimum, set to work contacting and organizing female athletes in Whatcom County.
“The athletic community in Whatcom County is a tight-knit group,” Nelson said. “Beth knew a lot of cyclists and skiers and I knew the paddle people.”
Hartsoch and Nelson created The Whatcom County Women Ski to Sea Facebook page, which now has more than 200 members, to organize training events and gain publicity for the various Whatcom women’s teams.
Hartsoch said she disagrees with the 10-team minimum. While there are plenty of female athletes in Whatcom County, finding time to organize a team, train and compete is a feat in itself.
“The idea that this division is not competitive because it has fewer than 10 teams is, in my mind, missing the fact that just building and maintaining a team for this division is an achievement,” Hartsoch said. “By the time we get to the starting line, the race is 90 percent over.”
Part of the problem of recruiting female athletes is that many women are preoccupied, in some way or another, with the process of raising children, Hartsoch said. Four children have been born to the Kulshan Cycles team in the past seven years alone.
Nevertheless, Hartsoch and Nelson have recruited scores of willing and able female athletes for the division. The teammates hope to harness this year’s momentum and secure a body of teams that will return to the race year after year. Some of the new teams signing on for this year’s race include Core Kinetics Pilates, W2Sci (Whatcom Women Scientists) and Core Physical Therapy.
“We’re trying to make Whatcom County’s female athletes feel like they’re part of a community,” Nelson said. “I think this year that feeling is really starting to catch on.”   x