When Krissy Moehl quit her day job seven years ago for ultra running, it allowed her the time to pursue any opportunities that came her way. Since then, she’s clocked the fastest-known time on the 165-mile Tahoe Rim Trail, written a book called “Running Your First Ultra,” supported friends and fellow runners on their projects and record attempts, won races around the country, and ran for fun around the globe.

Last December, her travels led her back to the Chuckanut Mountains and to Fairhaven, on the south end of Bellingham. It’s a homecoming, in a way. Moehl grew up in Bow, on the other side of the mountain. The first ultra she ever ran – the Chuckanut 50K, which she has now directed for 15 years – starts blocks from her new home.

Though she hopes to establish roots in Bellingham, Moehl, 38, maintains a busy travel schedule. She talked about her career and her future during a four-day window between summer trips.

MOUNT BAKER EXPERIENCE (MBE): Why did you move to Bellingham?

KRISSY MOEHL (KM): I moved home, essentially. I lived in Boulder, Colorado, for the last four years because I felt that I needed to live someplace else – to truly uproot myself – before deciding to call the Pacific Northwest home. I had a great time down there. There’s a terrific group of people that I really connected with, but it just never felt like home. Here I have these moments where I go, “This is it, I can call this home.”

MBE: How do you pay the bills, and has that changed with your move to Bellingham?

KM: I do a lot of things. I manage sponsorships, coach athletes, race direct and I’ve been writing a lot more lately – whatever I can piece together. I quit my last day job (working to protect wild places with The Conservation Alliance) seven years ago in May. I had two rules: I had to smile and continue enjoying running, because making your passion your job is kind of risky in terms of continuing to enjoy it; and I didn’t want to do it on credit cards. It had to be sustainable.

The biggest thing that changed with moving here was starting the Revolution Running coaching group. I’m trying to see if that’s something that could be long term; I don’t see myself being a sponsored athlete for the rest of my life.

KM: I love first-timers – working with athletes who have a ton of curiosity about the sport and what they might be capable of. I think that’s why I’ve race directed the Chuckanut 50K for so long. I love watching people cross the finish line in awe of themselves and what they’ve been able to accomplish. To be able to provide a venue for that, as a coach or as a race director, is such a sustaining part of what I’ve been doing.

MBE: How long have you coached runners?

KM: I’ve been coaching for the last five years. A guy who lived up in Saskatchewan called me after I quit my day job and said he’d followed my running career and asked me to coach him. It took me about eight months to decide to actually give it a try.

That’s been the coolest thing about these last six years – just being open to opportunity. I spent a month in a motorhome crewing a friend as he ran 50 miles a day across the U.S. There are just so many different experiences that I probably wouldn’t have had if I stuck to what I thought I was supposed to do. I had myself pegged as a married with kids and dog and fence type, and I’m not that person.

There are just so many different experiences that I probably wouldn’t have had if I stuck to what I thought I was supposed to do.

KM: It’s amazing. I’ve in some way or another worked with them since day one of my ultrarunning career. They’re an incredible brand. I think the best part about working with them is I’m contracted as a tester; my job is to make sure the product works in the environments I train in. The fact that I go and win races around the world, they think it’s cool but they don’t really talk about it. It’s not in their marketing; it’s not in my contract. My job is to make sure the product is the best it can be.

MBE: Will living a few blocks from the start of the Chuckanut 50K allow you to do more with the race?

KM: This year is the 25th anniversary of the Chuckanut 50K and that will be my 15th year as race director. I foresee putting a lot of energy into making that a big event. Details are just now starting to come together. I submitted for permits and found out that I need to find a new start/finish location. So there will be a bit of a change. I’m thinking we will likely go back to the original spot [Fairhaven Park] and figure out a way to deal with the lack of parking. We have confirmed the post-race party at Wander Brewing and plan to have live music, a photo booth, a raffle to benefit Girls on the Run and likely some other fun goings-on.

We’re looking into what else we might bring to the table to make it a bigger celebration. Engaging the community is a big part of what we want to do. I want to get as many people involved as I can. 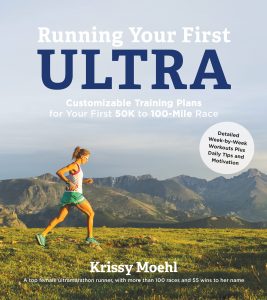 MBE: How is your new book doing?

KM: It’s been pretty popular. I’ve been told that I pigeonholed myself with the title “Running Your First Ultra.” What I’ve heard is that people who have been running ultras for 5, 10, 15 years found helpful pieces in there, and people that will never run an ultra loved finding little tidbits that helped their running. But about half the book is training plans that are specifically for 50K, 50-mile and 100-mile races.

MBE: Can you encapsulate the book? What are the most important parts of training for an ultra?

KM: I’m a big advocate of consistency, so let’s say the training plan calls for 10 miles one day but you can only get in three – it’s better to do the three than not run at all. You’ve got to put in your miles. Recovery is a very key aspect. Take a down week to recover after building up your mileage and let your body absorb the load so you can start again and build from an even stronger base. Core strength is the final thing that I would add. You can’t run an 80-miler to train for a 100-miler, so you have to support all your systems and core work will be that strength that will get you through those later miles.

MBE: Do you have a favorite terrain for running?

KM: I’d say high alpine, and I like earning it. In Colorado you can easily just be above tree-line, no problem. Climbing from a deep valley and getting up above tree-line like you can here is pretty cool.

MBE: Has your motivation for the sport changed over the course of your career?

KM: Definitely. I don’t think I’m as competitive as I used to be. I’ve never really been a super competitive person, but as soon as the gun fires I’m definitely paying attention to how the field works and where I’m working amidst it. Running for me now is more about exploration as opposed to competition.