The Cascades are a wildly diverse mountain range. We have glaciers and snowfields, we have talus and boulders, we have water ice and alpine ice, and we have steep rock that’s good and steep rock that’s bad. The only consistency between these mediums is that there’s no consistency, and this creates a problem when it comes to choosing footwear.

Imagine Forbidden Peak. Here’s a mountain that – depending on your climbing confidence – could be climbed in boots, approach shoes or rock shoes. And due to the small glaciers surounding the mountain, it’s likely that many people will require two types of footwear on an ascent.

An important but often underrated skill of alpinism is selecting the appropriate footwear for the job. The following is a breakdown of footwear options and their backcountry niches.

On strenuous alpine rock routes, climbers often wear comfortable “all-day” rock shoes. In the mountains, rock shoes should be reserved for high-end pitches, as they are most effective when conditions are dry and not too cold, with little or no snow to negotiate on the route.

The sticky rubber on rock shoes does not perform well in temperatures below freezing; if you are in such temperatures, you’ll likely want more covering your foot than a rock shoe anyway. Most alpine climbers prefer to wear rock shoes on routes that are graded 5.8 or harder.

Approach shoes are a great lightweight option for fast ascents of easy alpine terrain. Sticky rubber approach shoes are extremely popular on alpine rock routes, especially after the snow melts and you can hike in on dry trails.

However, some climbers do strap lightweight crampons to these shoes in order to cross small glaciers or late-summer snowfields. It is not uncommon for recreational alpinists to lead up to 5.8 in them. Indeed, many are willing to lead harder routes with them and to pull on gear here and there to avoid bringing another pair of shoes.

There are, however, two disadvantages to approach shoes. One is that they don’t provide much support for hiking with a heavy backpack, and another is that they will get wet and cold if it snows. Like rock shoes, when the rubber on approach shoes gets cold, it gets slippery and hard, especially when walking on snow or ice. Climbers should be cautious when using approach shoes in these conditions.

Leather boots are the most common type of footwear in the alpine climber’s toolkit. Most leather boots climb both rock and ice relatively well. Some lightweight leathers are tailored more for rock climbing, whereas heavier leathers have an ice climbing focus. The primary difference between the two weights is often the amount of insulation in the boot.
Most alpinists are comfortable leading low fifth-class rock in leather boots, though it should be noted that climbers who purposefully train in them will be able to climb mid-to-upper fifth-class rock as well. The obvious conclusion is that leather boots provide an excellent choice for situations wherein you might encounter a combination of snow, ice, and moderate rock climbing.

There are some disadvantages to leather boots, however. First, some of the heavier leather boots are difficult to break in and can cause serious blistering in the process. Second, many leathers have a full shank in the sole so they’re too stiff to smear well. Finally, they are difficult to dry out once they become wet.

Though double boots are the least precise and the heaviest of all alpine footwear, they are the warmest and easiest to dry out in the backcountry. On Cascade volcanoes in the early spring, on the flanks of Denali, or on other cold objectives, double boots perform extremely well.

Historically, most double boots were plastic, though that’s not necessarily the case any more. The reason many people like double boots on Cascade volcanoes is because they’re easier to dry out than leathers. It’s possible to take the inner boot into your sleeping bag with you and to use body heat to dry them. This is particularly useful on spring ascents when the snow is so slushy that it’s almost as if you’re wading in knee-deep water.

Plastic boots are terrible on rock. They don’t bend or smear at all. They’re clunky and imprecise. Climbing in crampons while wearing double boots is a bit better than without crampons. But that doesn’t mean that they perform as well as leathers in a technical setting. The primary use of double boots is for cold, high mountains. If you primarily do quick trips in the Cascades during the spring and summer, it’s likely that you can deal with the dampness. But if you do long trips in the winter or spring in the Cascades, it makes sense to have a pair of double boots.

In order to choose the best footwear for your climb, spend some time researching the route. What are you likely to encounter, snow, ice, difficult rock climbing or a mixture of all three? In addition to knowing what to expect, make sure you know your limits. How hard can you climb in each type of footwear? These two factors will play the largest role in your decision. If you know you’re going somewhere cold that will also require low-end technical rock climbing, it’s a good idea to take your intended footwear to the crag or the gym and get comfortable climbing the necessary grade in them.

Choosing appropriate footwear for an alpine outing is a skill that takes as much time, experience and refinement as learning a new technique, and occasionally you’re bound to get it wrong. But that’s OK. You know what they say, “Good judgment comes from experience, and experience comes from bad judgment.” 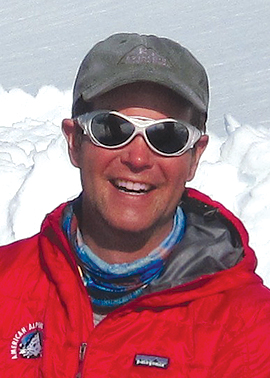 ason Martin is a mountain guide, general manager at American Alpine Institute and a widely published outdoor writer. He lives in Bellingham with his wife and two young children.