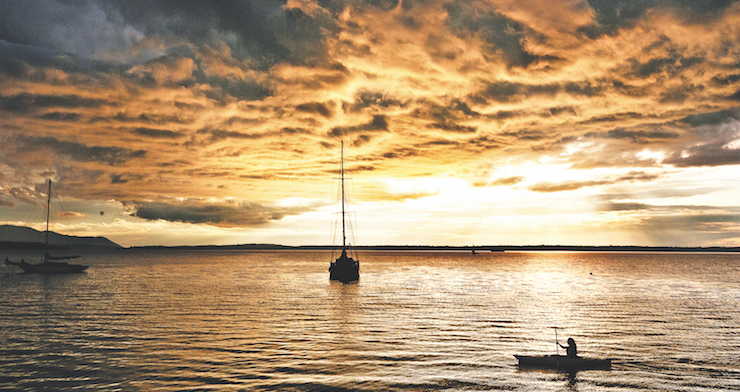 Coasting with the currents

A kayaking adventure on the Salish Sea

Destination: Clark Island. It’s a well-known marine state park that sits off the northeastern coast of Orcas Island in the San Juan Island archipelago. Neighboring the island are The Sisters, a small set of rocks that are part of the National Wildlife Refuge.
I’d seen pictures, heard great stories and surprised people when I would remark, “I haven’t been out there, yet.” My planning to do so began months in advance, looking for a window of fair weather, timely tides and a competent paddling companion.
More than just reaching the island, I wanted an adventure – an excursion. Not quite an expedition, more like a long day-hike on the Salish Sea with the elusive Clark Island as a key piece in my personal connect-the-dots puzzle. The forecast looked favorable: not too rainy or windy. The tidal currents would move in such a manner that I could cover some considerable distance with Mother Nature’s assistance. Two out of three wasn’t bad. I’d be going solo, but fortunately, I enjoy my own company.

10 a.m. As I prepared to launch from Gooseberry Point I listened to the staccato, computerized voice of the NOAA weather forecast on the handheld VHF radio. “Conditions for Bellingham, 10 a.m., 48 degrees Fahrenheit at the Bellingham airport, mostly cloudy, rain later, highs in the 50s, wind southwest 10 knots.” Good enough for me. Launching from the ferry landing I began paddling out the north end of Hale’s Passage. The current was doing just as The Current Atlas (with Waggoner Tables 2014) predicted, taking me towards the northern tip of Lummi Island and putting me in position to make the crossing to Clark. When the currents are running underneath you and the wind is at your back, you rock and roll, surfing the waves as they carry you for a bit and then pass you by. When they’re really rockin’ you charge from one wave crest to the next. “Yeehaw!” I exclaimed as the energy flowed from stern to stem underneath my trusted steed, a Delta 17 touring kayak.

11 a.m. Preparing to cross a major shipping channel and enter into the open waters of the Strait of Georgia, I came close to shore for a safety break. As I searched for a convenient (out of the wind) spot to stop, I rounded a small outcrop of rocks and looked to the shoreline. What I saw in front of me was truly amazing.
A huge bald eagle was eating a fresh octopus for lunch directly in front of me! I sat still and employed my nature-watching theory: Don’t look at them. This approach seemed to be working as the bird ripped apart the catch of the day a mere 20 feet from me. I pulled my Nikon PHD (Push Here Dummy) camera out of my paddle jacket pocket and captured the ravenous raptor in its element. I relished in this unexpected treasure of raw nature for a short time. The tidal schedule demanded my departure. 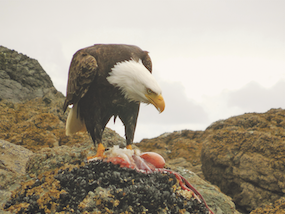 As I rounded Point Migley a colony of hauled-out seals entered the water with their heads quietly periscoping up and down, keeping a watchful eye on me, the intruder. Looking southeast to my next stop I now had my eyes on the prize. Clark Island dead ahead. I crossed the busy shipping lane and enjoyed the ebb tide working in my favor as I coasted across the southern end of the strait.
Noon The skies to the southwest were clearing to display a beautiful blue as I approached the western beach of Clark Island. The view from my lunch spot looked west across to neighboring Barnes Island and to the north I could see Matia and Sucia islands in the distance.
The chorus of eagle calls and other flying friends filled the air, echoing through the madrone labyrinths that are interspersed throughout the island. The picnic areas and campsites were conveniently empty as I gave myself a tour of the grounds. Walking the southeastern beach, I watched the water between the shore and The Sisters swirl and churn as the flood tide prepared to move in. There goes the neighborhood!

2 p.m. “Now what?” I thought. I was out to paddle, not just relax on a sunny beach and practice the art of doing nothing. I was on an adventure and it was only 2 p.m. I mapped out the next six hours, identifying the places that would put me in the best positions to ride the tide. My notes: 4 p.m. – Lawrence Point; 5 p.m. – Rosario Strait; 6 p.m. – Village Point; 7 p.m. – Point Migley; 8 p.m. – Gooseberry. The schedule seemed reasonable.
3 p.m. Traveling to Lawrence Point, the easternmost tip of Orcas Island, from Clark puts you in the shadow of the towering Mt. Constitution (2,454 feet) and offers zero opportunity for respite. Sheer rock cliffs flank this section of the largest island in the San Juans. The calm air and sun reflecting off the water was refreshing after a long windy winter.
As I rounded the point I heard strange noises coming from around the bend. They emanated from the two large nostrils of a winded sea lion catching its breath after a dive for an afternoon snack. My heart raced with excitement and anxiety. Did it calculatingly submerge itself to ambush and cash in on me as the bounty for dinner? Seriously, the thought went through my reptilian brain. I froze in place and inhaled deeply as reason called out, “Paddle to safety!” I stormed the beach and scrambled up the rocks for an eagle-eye perspective. The head and long body of the immense creature was visible as it floated by in the clear waters. Big “cow-eyes” looked at me while he continued to forcefully inhale and exhale, replenishing its oxygen supply for the next dive. The head would be the first to go, followed by the increasingly wider trunk as it rolled downward and dove out of sight.

4 p.m. While on Orcas, thousands of white birds were streaming past and landing on the water just to the south. With time on my side and the sights of Peapod Rocks within reach, I chose to extend my journey to learn more. As I approached, a pod of porpoises passed by on both sides of my vessel. Placing my paddle on the deck, I drifted among the birds as they allowed me to join their party and play nature’s paparazzi for a spell. Thanks to my Facebook friends, who later identified them as Bonaparte’s gulls. Spellbound, I stayed for an extended visit.

6 p.m. Instead of taking the easy way home and going with the flow, I decided to head across the open channel to Lummi Rocks. This would put me close to shore in case I needed a pit stop along the final miles towards home. As I crossed the strait, the flood tide was making itself known, complemented by the wind that now seemed to be gaining strength. I reached Village Point a bit behind schedule, but still in time to have things going my way. As I paralleled the northwestern shore of Lummi Island ominous weather was approaching from the south.

8 p.m. To the west a wall of darkness shrouded the potentially beautiful canvas for the sunset. The sun was not providing the light I planned for on my final leg into Hale’s Passage and back to Gooseberry Point. As I came out of the leeward side of Lane Spit, the wind became a significant factor, creating a force to battle against for the first time all day. The breaking waves crashed onto my foredeck, spilled around my sprayskirt and sprayed into my face. Darkness fell as I intently dug the blades of my paddle into each oncoming wave, keeping my hips loose so the boat would bob and weave through the maelstrom.
I couldn’t help mentally rehearsing the worst-case scenario: tip over, lose touch with boat, struggle unsuccessfully to swim into the wind and waves and get carried north to Boundary Bay (it’s actually a body of water, not just a brewery, folks). Game over.

8:30 p.m. I switched to my auxiliary tanks to engage my personal-power reserve. My shoulders were sore and my hands were blistered. A gale force wind was now in effect, which according to the Beaufort Scale means “Moderately high waves with breaking crests forming spindrift.” Yup; and the waves were hitting me in the chest and face as I maintained forward momentum under the blanket of dark night. Paddling strong with my head down and breathing deeply like the sea lion, I broke through the wind and waves and reached my final destination. I had landed.

As the executive director of Recreation Northwest and the founder of the Bellingham Traverse and co-founder of Kulshan Quest Adventure Race, Todd promotes outdoor recreation and brings people together to enjoy, preserve and improve the places where we play. He enjoys biking, hiking, paddling, skiing and will try anything twice. Get connected at recreationnorthwest.org.   x