Some local brewers are stretching the limits of local beer and discovering that the Northwest is full of ingredients.

There’s something special about cooking and baking with local ingredients, especially when they’re harvested in the backyard, foraged on a hike or bought from a nearby farm. It’s a gratifying connection to the land, a flavor reflection of your region and a reminder of a time when all our food wasn’t processed.

Few people make the same connection with beer; those who say “local beer,” usually mean beer brewed in their home city, county or state. If food was made nearby but with imported ingredients, we wouldn’t call it “local food,” so why do the same with beer?

Perhaps it’s because we view beer ingredients as commodity products. Multinational breweries work to quell regional flavors because they strive for consistency in their products, from one state to the next and one country to another.

In his book, “Brewing Local: American-Grown Beer,” Stan Hieronymus writes: “Local can be complicated. Questions come more easily than answers. Does any old beer brewed in town qualify as local? Do we think more highly of local beers because they are ‘green,’ because they are fresher, because breweries are locally owned and profits stay in town, because they use local ingredients?”

Most northwest Washington breweries have made beers with local ingredients, and you can probably find many on tap right now. Just a few past examples: Wander Brewing made Vanbier American Lager with lemon zest and fresh basil from Cloud Mountain Farm Center of Everson, Kulshan Brewing made a Christmas ale with actual Douglas fir and spruce trees from the Fullner Christmas Tree Farm and Atwood Ales sourced oysters for Dark Harbor Oyster Stout from the Drayton Harbor Oyster Company, just a couple miles from the brewery.

Some brew with local ingredients for environmental reasons, because less shipping equates to a smaller carbon footprint. Some do it for economic reasons, as buying local supports other local businesses and jobs and keeps money circulating within the community. Some do it because they want to imbue unique and local flavors into their beers, including an element of terroir. Some do it for all of these reasons.

This isn’t to say that if a brewery gets its malt from Europe or its hops from New Zealand that it’s inherently bad, and local doesn’t necessarily mean better. Certain ingredients are not even available in different regions, so sometimes sourcing from faraway lands is necessary.

Here in Cascadia, brewers have some unique advantages for making local beer. All the main ingredients (malted barley, hops, yeast and water) can be grown, cultivated or sourced right here. 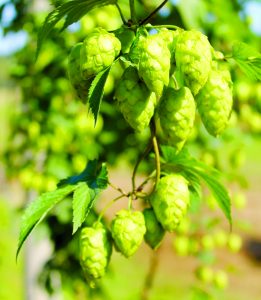 Atwood Ales, a brewery located on a small farm in Blaine, is working hard to make a truly local beer. Last September, with the help of 50 volunteers, Atwood Ales harvested 60 hop plants from its own farm, and owners Josh and Monica Smith figured the harvest would fulfill about 60 percent of their hop needs for the coming year.

“Because we focus mainly on farmhouse-style beers, we can stretch our small hops crop pretty far,” Josh Smith said. “If we were brewing IPAs, our hops would be gone in a matter of months.”

Last fall, Atwood released Off the Bine Fresh Hop Pale Ale, which was brewed with 100 percent Skagit Valley malts and 100 percent handpicked, estate-grown (meaning from the brewery itself) Cascade and Centennial hops.

Even breweries making large batches of IPAs can source their hops fairly locally, if not on the estate, as Atwood does. The United States now produces more hops than any other country in the world. Washington, Oregon, and Idaho account for roughly 97 percent of U.S. hop production, and nearly three-fourths of all U.S. hops are grown in Washington’s Yakima Valley. 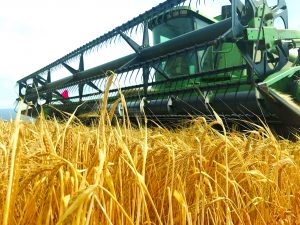 You can’t make a truly local beer without locally grown and malted barley, and there are plenty of maltsters – people who do the malting – in our region. Malted barley (and sometimes other grains) is a critical ingredient in beer, providing the sugars that are fermented to alcohol.

Nearby maltsters include Gambrinus Malting Corporation in Armstrong, B.C., as well as three GrainCorp (an international maltster) companies nearby: Canada Malting in Calgary, Country Malt in Vancouver, B.C., and Great Western Malting in Vancouver, WA.

Most exciting, however, is Skagit Valley Malting (SVM) in Burlington. SVM sources nearly all of its barley from the alluvial soil of Skagit Valley, which is some of the most fertile on Earth. Nearly every brewery in our area has brewed with SVM malt.

“Making beer with all local ingredients is special because it really hasn’t been done in our area in a very, very long time,” Smith said. “Until Skagit Valley Malting came along, it was before Prohibition that a local brewery could produce a commercially viable beer made with all local malt and hops.”

Not only is SVM close to home, it is also one of the finer maltsters in the country. The company designed and built its own equipment to perform all five phases of malting – washing, steeping, germinating, kilning, and polishing – without having to transfer malt from one piece of equipment to another. The unique process and precision control systems result in a product that is uniform, consistent and high quality. 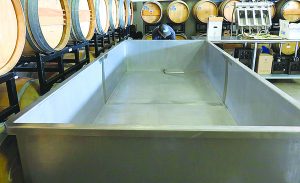 Because it’s a single-celled microorganism, and because many brewers propagate their house yeast for many generations, yeast usually isn’t considered a non-local ingredient. But when brewers buy a fresh and pure yeast culture, they usually buy it from one of the larger yeast lab companies, such as Wyeast Laboratories, White Labs, GigaYeast, or Imperial Organic Yeast.

Imperial, based in Gresham, Oregon, and Wyeast, in Hood River, Oregon, are the closest major yeast providers. Brewers who ferment with Wyeast’s Northwest Ale yeast (1332) get bonus points. This yeast strain, which is used by many Northwest breweries, produces a malt-forward and mildly fruity beer. I believe the yeast was originally isolated in the UK, but it’s stored and maintained just across the Columbia River, and it has become part of a regional flavor, especially in Northwest-style IPAs.

To make a 100 percent local beer, however, brewers must capture local wild yeast – whether it’s a small capture or a full batch of spontaneously fermented beer using a coolship (aka koelschip), which is a large, open-topped vessel that slowly chills wort while being inoculated with airborne yeast and bacteria overnight. This comes with many challenges and risks and ample potential for the wild yeast and bacteria to make the end product undrinkable.

A rapidly growing number of home brewers are making truly wild beer, and at least a few local breweries have made spontaneously fermented beers from wild yeast, including The North Fork Brewery in Deming, Wander Brewing in Bellingham, and Atwood Ales Farm Brewery in Blaine. So far, only The North Fork has released spontaneously fermented beers, and they have all been delicious in this beer writer’s opinion.

Spontaneously fermented beers typically take at least a year or so to “finish,” and often brewers will blend one- to three-year-old batches for flavor, balance, and consistency, similar to the traditional lambic gueuzes of Belgium.

While difficult to make, these beers embody the time and terroir of an area more than any other beer style, and they’re unlikely to be duplicated from one brewery to another, let alone one batch to the next.

Water is easy. Most brewers just filter city water and then treat and adjust its chemistry to match the style of beer they’re brewing. I have heard stories of home brewers collecting and filtering unique sources of water, such as water from mountain streams or snow from a nearby mountain peak, but it’s usually more about the story than the actual quality of the water. It’s usually just as good to use city or spring water from a local source. 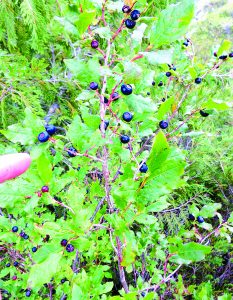 An adjunct is a non-malt source of fermentable sugar, such as syrup, corn, rice, honey, table sugar, Belgian candi sugar, fruit and unmalted grains. Most craft breweries use adjuncts to enhance a beer’s flavor and body.

Beyond adjuncts, creative brewers use countless unfermentable ingredients such as herbs, spices, cacao, coffee, flowers, nuts, plants and trees. This is an area with a lot of possibilities. Washington provides a bounty of options, from the sea (e.g., oysters) to the farmland (e.g., herbs, potatoes, pumpkins, fruits and berries) to the mountains (e.g., wild berries, spruce tips, nettles). Last year I made a sour ale aged on four pounds of wild huckleberries that my wife and I foraged on a couple of hikes in the North Cascades, and it was one of my favorite beers I have ever made.

Some might view these intensely local beers as a romantic trend, but more likely it’s a glimpse at the future of beer. Having an adequate local ingredient supply chain is key to making truly local beers, and local brewers are just scratching the surface.

“When we started playing with local ingredients it was really like taking your blinders off and seeing how much you’ve missed when you were only using ‘run-of-the-mill’ ingredients,” Smith says. “Those ingredients are all really high quality and there is nothing wrong with using them, it’s just a whole new palette to paint with when you commit to local ingredients.”