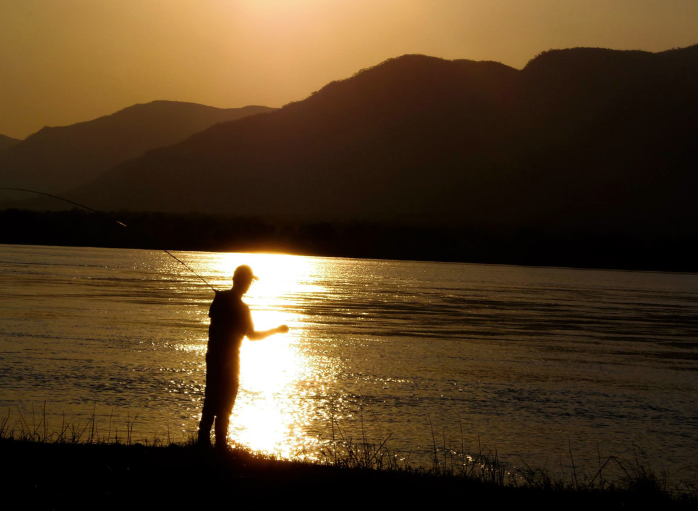 Story and photos by Matt Gruchey

Those of us who fly fish in the Pacific Northwest are well aware of how fortunate we are. Not only is this the home of all five Pacific salmon species, it is also the native land of both cutthroat and rainbow trout (the latter’s sea-run variant, the steelhead, is one of the most revered freshwater sport fishes in the world). The spectacular mountain ranges and lush temperate forests found in this small piece of heaven create some of the most picturesque fishing landscapes imaginable, and the relatively mild climate makes the region fishable year-round. Indeed, an ardent trout fisher might question whether there is any real reason to travel elsewhere in pursuit of quarry while the most avid of local anglers could fish a different river every week and never have to fish the same one twice.

Still, sometimes a change of scenery is nice, even if it serves only to remind us of how great our own stomping grounds are. And one of the advantages of fly-fishing is that it practically necessitates an idyllic setting, especially in trout fishing, where the target species thrives in clean, cold, well-oxygenated waters with abundant food sources. By bringing its user out from the city and into these tranquil settings, the fly rod itself serves as a tool for adventure.

So when I had the opportunity to backpack across seven southern African countries last year with my good friend Matt, I never doubted that the fly rod would be coming. It would serve as a good excuse to venture off into lands less traveled. 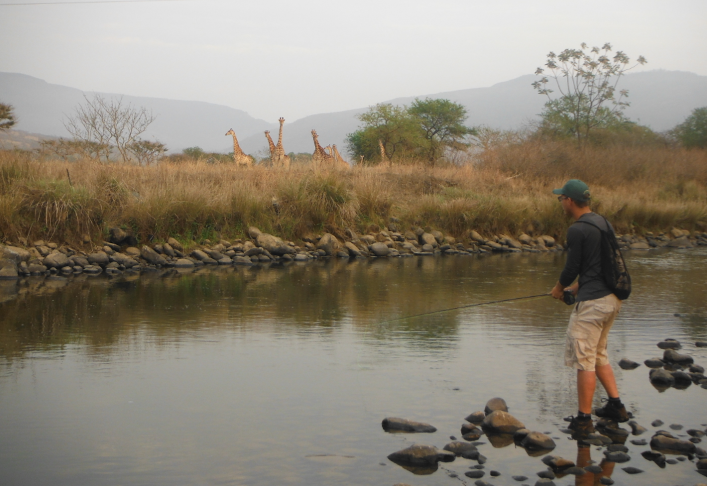 Our adventure began in northeast Tanzania, where we found ourselves fishing on the slopes of Mt. Meru for what we called “colonial trout.” Though these rainbow trout were in fact hatchery specimens, they were now thriving in the same river in which European colonialists had fought so stalwartly to introduce their wild brethren. The river flowed down the mountain and through the grounds of an old German mansion that had been refurbished and turned into a lodge. As we sat on the lodge’s veranda, gazing at the snow-crested cap of Mt. Kilimanjaro off in the distance, the nostalgia was palpable. More than 100 years after European settlers had first cast a fly rod out on the river, Matt and I stood with our own rods in hand, ready to carry on the tradition.

From Tanzania we headed southwest to Malawi, a small, land-locked country bordering Tanzania to the extreme south. In northern Malawi lies the Nyika Plateau which, at over 6,000 feet above sea level, possesses the right conditions to sustain a healthy trout population. We paid dearly to get there, though. Twenty-four hours of cramped bus travel across Tanzania, not including the six hours spent broken down on a small God-forsaken road with nothing to eat but fried goat entrails. I have to admit that after the cow testicles in Dar Es Salaam two weeks prior, that goat liver tasted as good as sirloin. 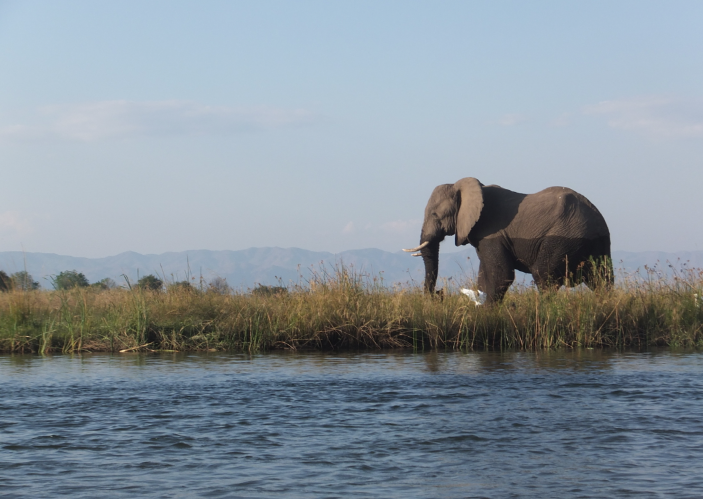 Our tribulations weren’t over, however. Accessing the trout dams in the heart of the plateau required a grueling 50-kilometer (31-mile) hike up a mountainous escarpment and across rolling plains of sun-burned grasses. Our 54-year-old ranger and guide, Henry, put us to shame by wearing sandals, chain smoking hand-rolled cigarettes and carrying an 8-pound Soviet-era rifle, all without so much as a complaint. We quickly put that shame behind us when the first rainbow trout rose to a dry fly the following day.

The trout fishing was much the same in the highlands of Zimbabwe in terms of scenery and weather, but we were drawn to the northern reaches of the country in search of a sinister-looking creature, the tigerfish, reputed by some to be, pound for pound, the strongest freshwater fish. The mighty Zambezi River, the physical border between Zambia and Zimbabwe, hosts an abundance of these tigers. We had success, though very little, during a 90-kilometer (56-mile) canoe trip downriver through crocodile- and hippopotamus-infested waters. Our efforts were most rewarded during a stay on a small 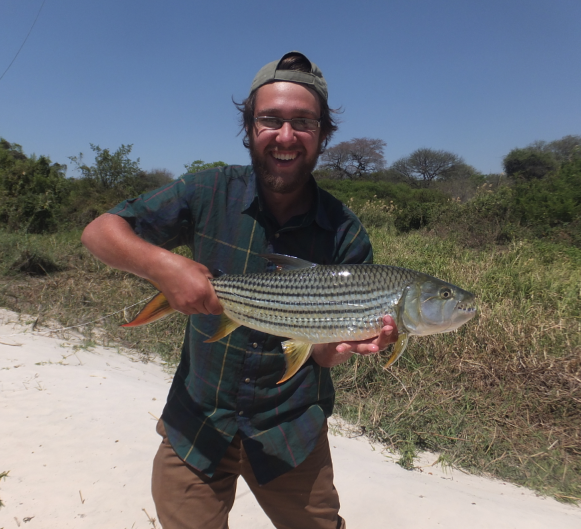 island on the Zambian side of the Zambezi, where we fished 10 hours a day for nearly a week. While some might say spending an entire day fishing without a guarantee of catching anything is lunacy, they have only to be holding a rod when a tigerfish smashes the fly to understand it all.

The last leg of our fly-fishing journey took us into South Africa’s Drakensberg Mountains, working our way southwest down the coast to Cape Town. I have never fished in a more striking landscape than the ’Berg. Towering peaks with names like Monk’s Cowl and Champagne Castle served as stunning backdrops to trickling streams that flowed down from their highest reaches. The evening sun at dusk would cast a spectacular reddish glow across the jagged horizon and illuminate every detail of the rocky crags. The rainbow trout living in these mountain streams were small, many still sporting their juvenile markings, but active and fearless. Within mere seconds of casting a small mosquito into any swirling eddy we could be sure that some trout, gripped by a reckless abandon, would rise quickly from the depths and sip the fly under.

We left the Drakensberg and continued down the South African coastline, where we fished for carp-like yellowfish on a river known as the Umkomaas, often within sight of towers of curious giraffes. One evening, just as the sun had disappeared beyond the hills, I found myself in a rather strange predicament. While standing knee-deep in the river and battling with a fair-sized yellow on the line, a rather mangy-looking jackal appeared from the brush and began pacing the shoreline. One hand I kept on the rod and the other I waved about frantically, simultaneously making growling noises to try to intimidate the animal to no avail. I ended up screaming for Matt to abandon his station downstream and help me out, which he did with a few well-aimed throws of stone. I must say that such a predicament never arose while fishing back home. 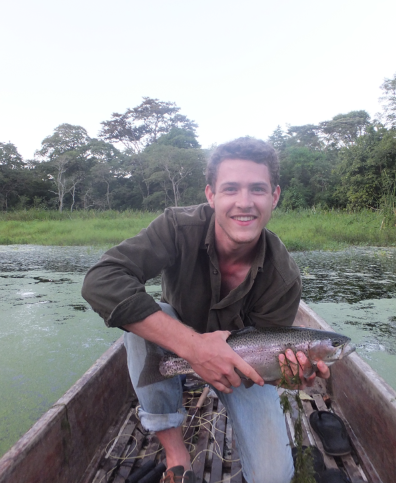 By the time we reached Cape Town, we had backpacked across seven countries and caught fish in six. It was a trip of many firsts for us: first time fishing in a foreign country, first time fishing near crocodiles and hippos, first time fishing from a dugout canoe. What I realized after all of this is that fly-fishing and adventure travel are immensely compatible. Despite the great affection I bear for the Pacific Northwest’s natural splendor, there is an alluring novelty to fishing in foreign settings. Just as the fly-fisherman must constantly adapt to changing circumstances around him in order to be successful, I think it’s just as necessary that he change his scenery from time to time, even if it’s only to remind himself of his good fortune.    x