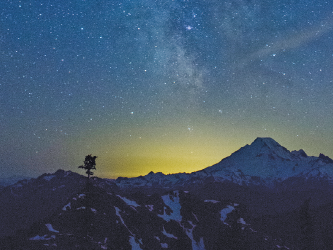 In summer, these latitudes are marked by long days and short nights, at least until June 22 when the days begin to grow shorter again. Compared to southern latitudes, we can play all day and much of the evening. But once the sun is good and truly gone, what to do?
These warm summer nights are perfect for observing the heavens and especially watching meteor showers. Ever wonder how meteor showers get their name? They are named after the constellation from which they appear to originate.
Camelopardalids meteor shower May 23/24:
Astronomers are excited about the possibility of a new meteor shower this year. Those of us living in Canada and the northern part of the U.S. could be in for one hell of a show. The Camelopardalids meteor shower is predicted for the night of May 23-24. The peak viewing times are projected to be from 11 p.m. on May 23 until 1 a.m. the next morning. While some astronomers are predicting a meteor “storm” of up to 400 meteors per hour, most expect somewhere between 100 and 200.
The meteors will appear to radiate from the Camelopardalis constellation which is located in the sky near the Polar star. The meteors that observers will see streaking across the northern sky actually stem from a debris trail left in the 1800s by the Comet 209P/LINEAR, discovered in 2004.
Perseids meteor shower August 10-13:
Unfortunately, sky watchers will have to contend with a waning gibbous moon during the Perseid showers. A waning gibbous moon is anything smaller than a full moon but larger than a half moon. Nevertheless, if you persevere into the early morning hours around dawn, you should still see a worthy display. The great thing about the Perseids is that they appear to come from all points of the sky so you don’t need to know which constellation they radiate from. Okay, seeing as you ask, they appear to originate in the constellation Perseus the Hero which is located in the northern sky east of Andromeda and south of Cassiopeia. Typically, up to 100 meteors an hour streak against the early morning skies.

Where to watch:
Obviously, the further away from city lights, the darker the skies and the better your viewing experience. South of the border, a popular viewing location is Artist’s Point just up the hill from the Mt. Baker ski area. During summer nights, the parking lot is full of the cars and campers of people seeking a clear and dark view of the skies. North of the border, you have to contend with the lights of Vancouver. Nevertheless, Porteau Cove on the Sea to Sky highway is sheltered from city lights as is Wreck Beach at U.B.C. In the valley, people gather at Aldergrove Lake Regional Park and McDonald Park in Abbotsford. Located on Number 3 Road off Highway 1, local astronomers successfully convinced the city council to make McDonald Park into a “dark sky park.”   x

iPhone & iPad:
GoSkyWatch Planetarium ($3.99) This app allows you to identify and locate stars, planets, constellations and more by orienting your device to the sky.

Sky Guide: View Stars Night or Day ($1.99) An in-app purchase allows you to track satellites as well as the regular stuff.

Android:
Mobile Observatory ($4.99) This one of the highest rated Android astronomy apps. It provides live views of what you’re seeing and gives lots of extra information on stars, planets, meteor showers and more.

Star Walk Astronomy Guide ($3.17) You can tap every star, planet, constellation, or deep space object to access information. A Time Machine scale on the right allows you to explore the night sky of tomorrow or years ago.