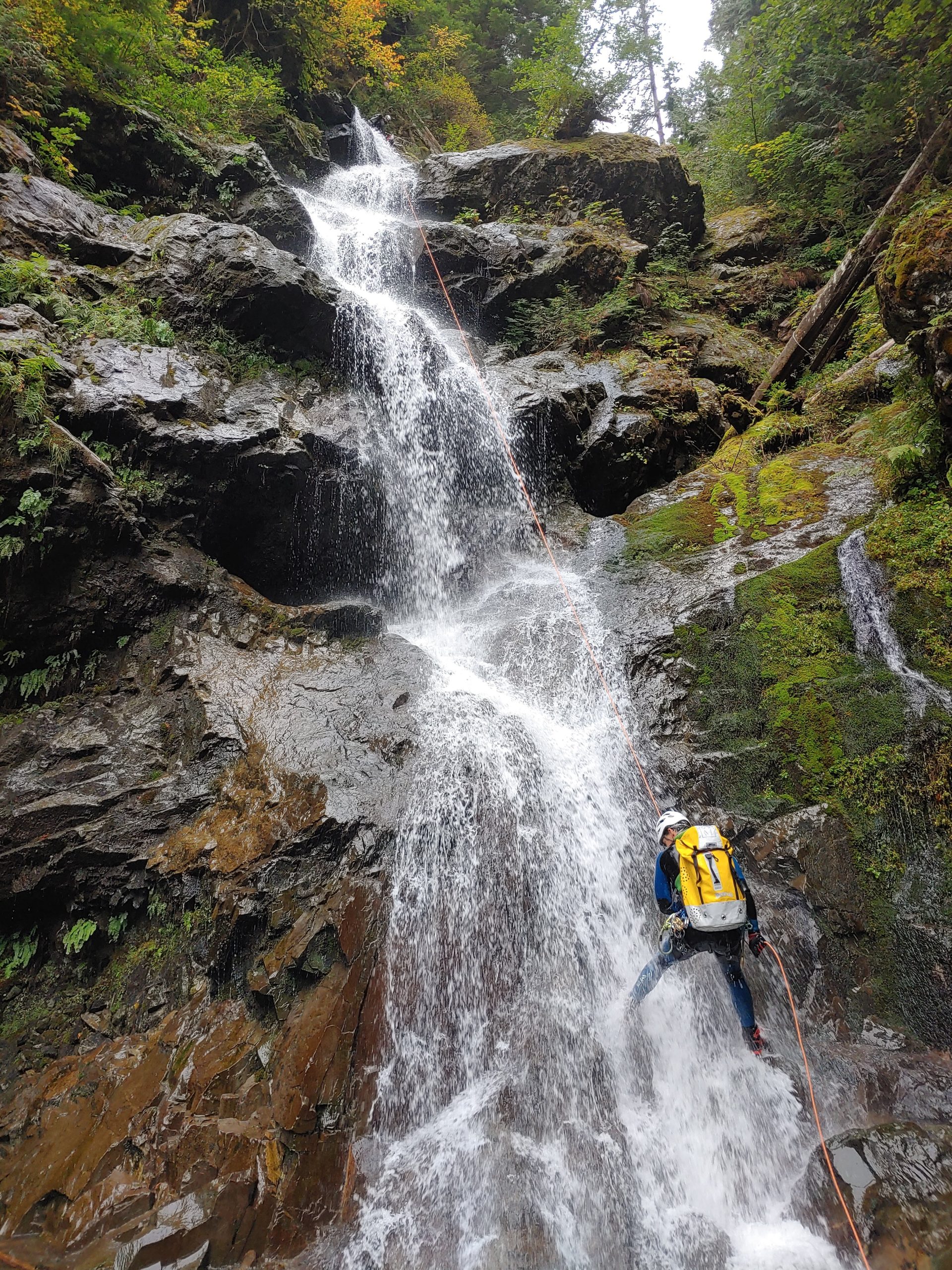 Ice-cold water slid down the rope and over my hands as I grasped the rappel line. The thunder of the waterfall next to me filled my ears. My feet skated across the mossy wet rock, and that’s when the instructor began to yell.

“You’re ruining the moss!” he shouted. “Get back into the waterfall!”

I looked at where my feet had been, and he was right. The moss was torn away from the muddy rock. I didn’t really care about the moss. I knew it would grow back, but Leave No Trace…

I sighed to myself and swung into the waterfall.

Instantly, I was pummeled by whitewater. It was as if I’d been inserted into the center of a washing machine, on a rope. Ice water filled my wetsuit and I continued to gingerly lower myself down to the end of the line and into a pool.

The climber in me cannot stand to see a rope without a knot in the end. This deeply uncomfortable feeling was compounded by an accident in 2007 where I rappelled off the end of my line and fell six feet, seriously injuring myself. And now, I was staring at the open end of my system. It was open so that I could easily swim away, to decrease the possibility of drowning in this extreme environment.

I rapped down to the bitter end of the rope, and intentionally slid off into a frothing pool of whitewater. A few quick strokes brought me to a rocky shore on the periphery of the canyon. I stood up and looked at the rest of my team at the top, and blew my whistle.

A whistle is the only way to effectively communicate in a canyon. This type of environment is too loud to yell, and too wet for radios.

Another made his way down into the same pool. He too swam over to the edge and blew his whistle. And in time, all of us were down.

The next objective: A swim through a tight little notch. We began to work forward, floating with the current, the canyon only about four feet wide. The slimy green walls climbed up, 10 feet above us in the claustrophobic slot. The intense green of pine trees towered above that, looking down on us in the canyon like protectors.

I have felt small before on the sides of a mountain. I’ve felt small high on a cliffside, looking down at nature in its glory. But the insides of a swiftwater canyon are different. You feel small, not because of what you can see, but because of what you can feel, that never-ending churning water, that same water that sliced its way into the earth over the eons. You can feel power in that water, power that’s both inspirational and terrifying at the same time.

At the end of the swimming slot, we arrived at a natural waterslide. Each of us took our turn, sliding over slick rock a short distance and into a pool. The rushing water drowned out the giggles and laughter that went with such a cool feature. And after that was a 10-foot jump. Doing this in a canyon is spooky, so the instructor rappelled down first to check the depth. Then each of us jumped, dropping the distance in a blink and splashing down into another deep pool.

Some of the best places in North America for swiftwater canyoneering are in this region. People are traveling from all over the country now to explore our canyons. Indeed, a few of them in the Squamish area are cited as being world class. 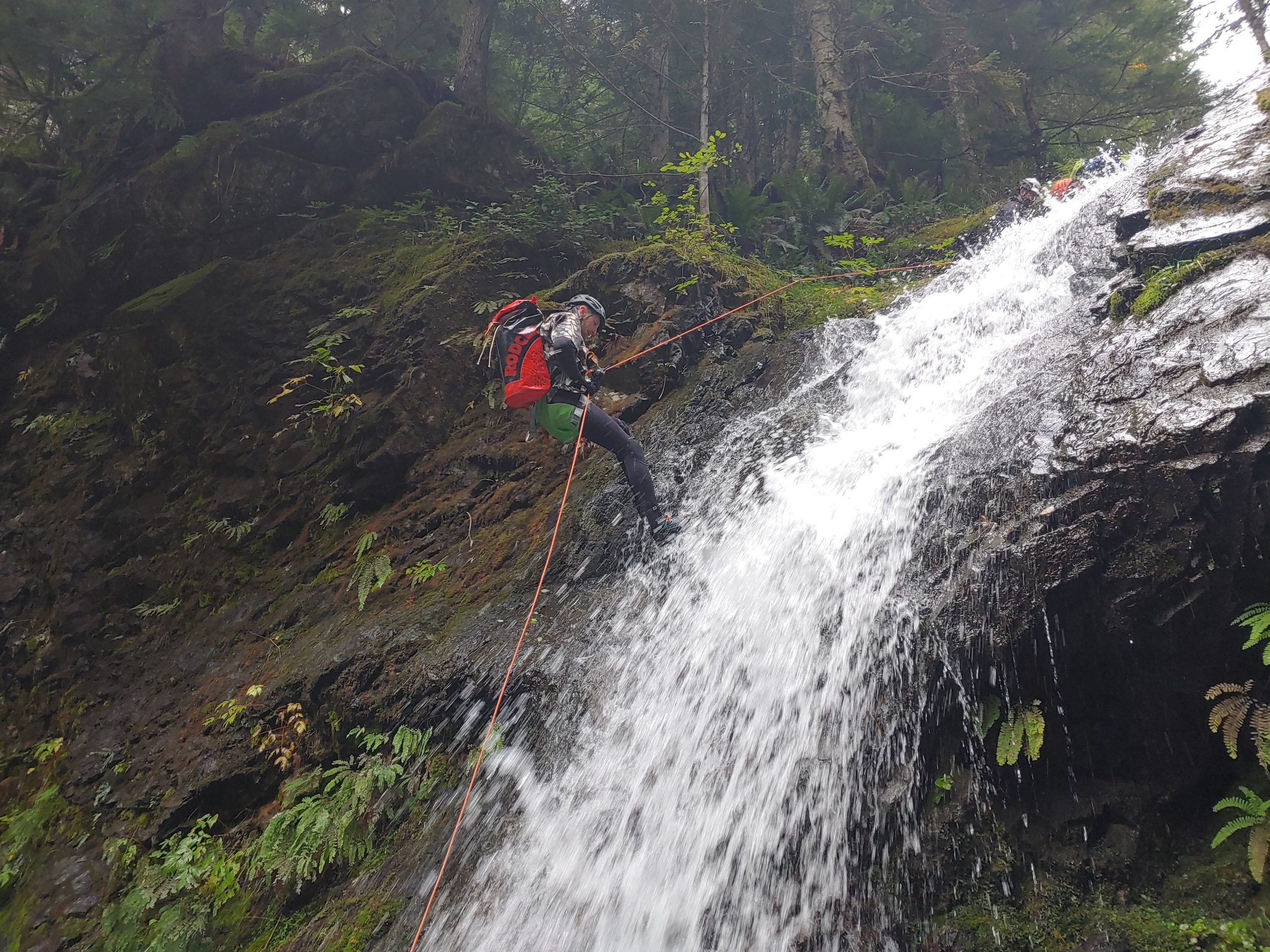 Accidents are on the rise as more people become acquainted with the sport. Certainly there are falling hazards due to rappel error, but there are also hazards associated with slick rock, both in easy terrain, as well as near an edge. And of course, there are hazards associated with the amount of water in a canyon. Similar to an ice climb, swiftwater canyons “come into shape.” If there’s too much water, the skills required to run a canyon are much greater than the skills required when the canyon is in shape.

Rescue should also be considered by entry-level canyoneers. The reality is that it’s hard to get a message out of a canyon after an incident, even with a satellite messaging system like an inReach. Most mountain rescue units are also not equipped with the skills or knowledge to complete a rescue in a swiftwater canyoneering environment. As a result, it is really important that swiftwater canyon teams are competent in the environment and can self-rescue.

This sport will likely take off with a trajectory similar to backcountry skiing. Twenty years ago, there were backcountry skiers, but not many. Today, they’re everywhere. Swiftwater canyoneering may feel like that. There aren’t that many canyoneers today, but in 20 years, who knows?

This is an exceptionally fun sport that can take you to insanely cool places. As somebody new to the sport, I really can’t wait to see what’s waiting for me over the next waterfall, in the next pool or down the next slide. It’s a sport that’s similar to other things I do, but different enough, that it has provided a new sense of deep inspiration.

I thought about all of this as I clipped into the rope for my next rappel. I dropped down over the edge, avoiding the moss and swung into the heart of the waterfall. Ice cold water cascaded down over my head, down the back of my wetsuit. Hanging there, in the belly of the beast, I felt truly alive.   x

Canyoning in the Pacific Northwest: A Technical Resource by Kevin Clark – This textbook is available online.

The Mountaineers – Basic and Intermediate Canyoning Courses – Offered in late spring and summer by the Seattle Mountaineers.