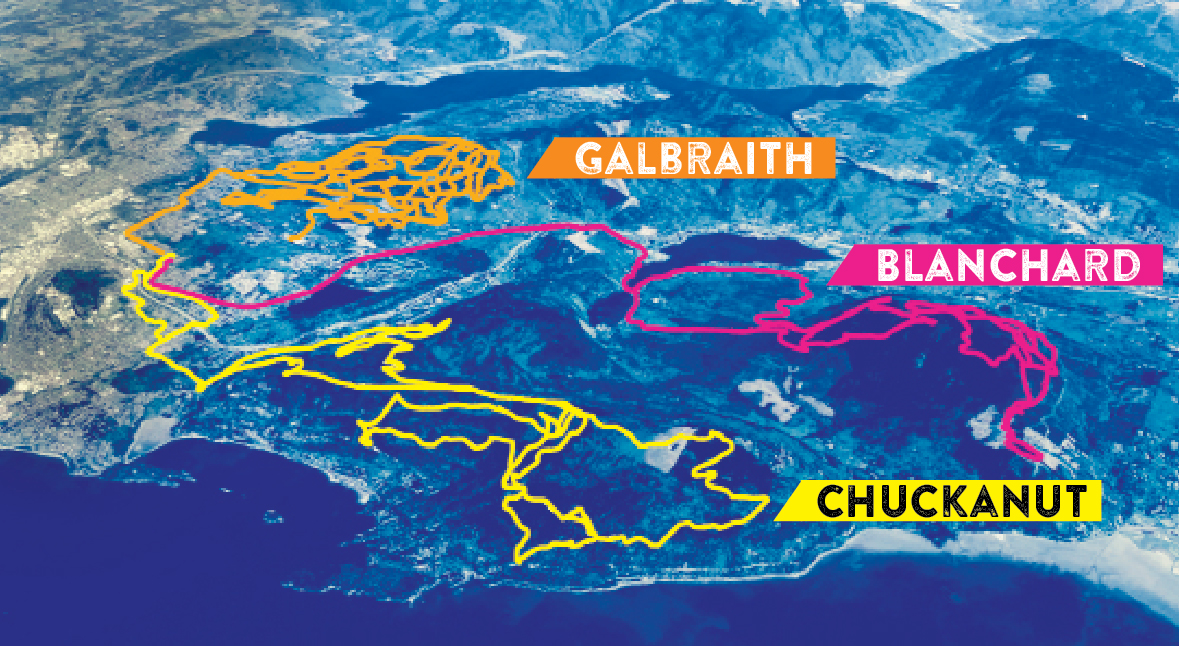 On a dim and drizzly Sunday afternoon I lugged my bike up the steep hill to my house after a long ride. The misty hills, the mud caked on my face and the satisfying exhaustion in my legs all swirled into one sensation in the closing moments of this third and final level of a three-day trail game. The game was to ride all the trails on the three primary trail networks of Bellingham in three days. Level 1: Galbraith. Level 2: Chuckanut. Level 3: Blanchard. At the end, my virtual screen tallied 16 hours, 122 miles, and over 24,000 feet of climbing. The grownup kid in me did this without question, but the adult in me (and those around me, I’m sure) wondered “why?”

I like to say that riding a bike, or just being outside with a simple pleasure-seeking objective, keeps me in touch with my 14-year-old self. Of course, I can’t speak for all 14-year-old experiences, but the “14” I am referring to is the engaged time in life when the world is still a playground. It is the time when responsibilities and serious elements of life have begun to materialize but doing things for pure joy is still natural and common. I’m talking about the young spirit whose sense of reality is still squishy enough to instinctively balance work and play.

When I moved to Bellingham in the late summer of 2013, I was 14 years past 14 and deep into my own version of balancing work and play. My introduction to the back yard was to pedal into the woods after work and get “lost.” I was not lost in a geographic sense, but absorbed by the woods and my own game of linking routes along the spider web of trails, whether or not I knew which one connected to where. The game began with Galbraith, then soon expanded to Chuckanut, Blanchard and beyond.

It was both a weeknight and weekend affair, to see how many new trails I could link together between conference calls, deadline crunches or before dark. As the map in my head filled thick with lines and elevation profiles, deep mossy green woods, waterfalls and mountain views, the pleasant pull of the back yard bubble became ever stronger. Amidst the routine of my work at the time, and even during a handful of years traveling the globe for a professional cycling career, I was always eager to be drawn back in.

Ever since I can remember, I’ve been drawn to the outdoors not only for practical purposes or the cachet of athletic accomplishment, but for the opportunity to simply play. In a sense, it’s like my own video game where I get to dream up the storyline and become my own avatar while the physics of the outdoors and my body writes the rules.

The rules for this latest game were simple: in a three-day weekend, stitch together my mental map and ride all of the mountain bike trails on the three predominant trail systems in Bellingham. Three days, three mountains, all the trails.

On a Friday morning I donned my riding suit and climbed aboard my bike, pockets stuffed with supplies. I had a vague idea of the course and the challenges ahead, but intended to take it one trail at a time, turn after berm after root after rock until each hill was done, counting the stats along the way for motivation. 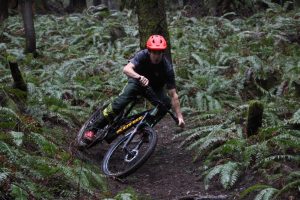 Day 1 (Galbraith) was a behemoth at 7 hours, 60 miles and over 10,000 feet of going against gravity. Day 2 (Chuckanut) was still fairly absurd at just under 5 hours, 35 miles and 8,000 feet of climbing. By the third day (Blanchard), 4 hours, 37 miles and 6,000 feet went by in a flow of green and euphoria. Considered all at once, this sounds horrendous. But one bit at a time: interesting! Being pointless was the point. The reward? The ride itself and being playfully engaged in the game.

This big undertaking had all the elements of an interactive game, which I’ll credit to gaming theorist Tom Chatfield. First, I had a heads up display (my bike computer) measuring progress mile by mile, vertical foot by vertical foot. Second, it engaged me through multiple long- and short-term aims, from completing the trail in front of me to linking together an entire mountain’s worth of trails. Third, my efforts were rewarded both by the pleasant sensation of moving and being out in the woods, and by checking each trail off my list. Fourth, I had immediate feedback based on how I felt, how well I was riding, or how well I was staying fueled and hydrated. And fifth, there was a constant element of uncertainty. Although I knew all of these trails individually, putting them all together in such a short amount of time made the familiar unfamiliar and exciting.

As a competitive cyclist I’ve experienced the other side of activity, where play can shrivel up too regularly into formal “exercise,” “workouts” or “training.” I try to notice when I become overly preoccupied with goals and when I should let myself be freely engaged. Of course, structured regimen is important to learn and is part of being an adult or mastering a skill, but it shouldn’t come at the expense of the ability to play. Because when we lose the ability to play, I believe we lose an aspect of our engagement with the world.

The first word in the definition of play is “engage.” To “engage in activity for enjoyment and recreation rather than a serious or practical purpose.” Play, despite its lighthearted and childish reputation, has serious implications. It implies engagement with the world, whether with others or with your own life. Psychologist and founder of the National Institute of Play, Stuart Brown says “we [humans] are really designed to play through our lifetime.” This so-called programming for playful behavior is known formally as neoteny – “retention of immature qualities into adulthood,” and it helps us be more adaptable.

According to Dr. Brown, playful behavior has a bearing on our overall well being as individuals and as a society. Play is the medium for linking the brain and body, balancing the mundane with the imaginative, the solemn and serious with the exciting and explorative. In this way, play, games, storytelling and other “open” ways of interacting with the world, as Dr. Brown refers to them, are essential for our neurological and social development, our health and well being. If play is the medium for achieving well-being, then for me, a bike (or hiking boots, skis or a climbing rope) is an excellent medium for achieving play.

It is fair to say that bikes and the outdoors have kept me and many of my friends young through the process of becoming and being adults. It is also fair to say that the youthful experiences in the outdoors have made me a happy adult, too. As English professor and Major League Baseball commissioner Bart Giamatti once said, “The action [of play] itself is an expression of happiness, and not a desire to achieve or have happiness.” My 14-year-old self doesn’t feel far away when I’m outside.

So, back to the trail games and the why. The point for me is that happiness is often a natural and unforced outcome of play. And so far as happiness begets happiness, then play is an essential part of the repertoire. It is not that our adult form of play ought to aspire to being epic and full of grand statistics. The point is to apply the playful approach to anything, ideally a healthy challenge outdoors, and to keep your sense of reality from becoming too stiff.

Once something gains steam that excites you, keep it going. It can be how many days in a row you can ride to the grocery store instead of driving, how many different routes you can take to and from work, or how many trails you can ride in a weekend. It certainly doesn’t have to involve riding a bike, but hey, I’m biased. When it comes to doing something outdoors that makes you happy, it can be very big or very small. Whether it’s keeping a fresh perspective on life’s mundane obligations, or seeking enrichment through personal challenges, the gamification of life is valuable. The kid in you should ensure that the game itself is completely arbitrary, but the adult in you should understand that it is driven by a serious and practical purpose: to maintain a healthy perspective between reality and fantasy, with health and happiness as a likely product.

Spencer Paxson is a professional mountain biker and owner of a sports performance coaching business. He is a Northwest native who has traveled the world but loves the mountains of home the most. peakenergyco.com

Bike touring to climb in the Bugaboos, a dream long in...