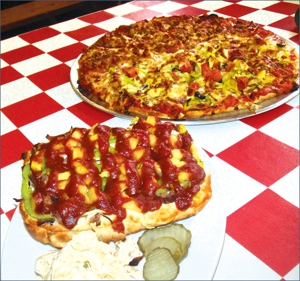 Concrete, Washington, is famous for its speed trap, its role as the setting for Tobias Wolff’s “This Boy’s Life” and for Annie’s Pizza Station. Annie’s was started by Chuck and Annie Bussiere in 1994 in a converted gas station in downtown Concrete, when Annie decided she’d had enough commuting and wanted a job that kept her closer to her family. A year later they moved to the current location just off Highway 20, where they’ve been cooking up the best pizza in the Skagit Valley ever since.Handcrafted pizzas are the focus of the menu, and include my favorites, “Annie’s Unleaded,” a vegetarian feast of mushrooms, olives, bell peppers, garlic and artichoke hearts, “Chuck’s Diesel,” which piles on pepperoni, sausage, Canadian bacon and ground beef, or the “Persian Pipeline,” a Mediterranean medley of feta cheese, sun-dried tomatoes, fresh garlic and spinach.

These pizzas are more than a meal. Thick handmade crusts come loaded with meat and fresh veggies and include a generous helping of red sauce and cheese. The menu also features an eclectic assortment of salads, sandwiches on homemade bread, calzones and homemade soups. Annie’s son-in-law Josh was working the counter when we visited, and provided a taste of his most recent invention – a creamy potato leek soup that blended leeks, onions, potatoes and butternut squash in a veggie-based stock finished with a touch of rosemary. Just the ticket after a cold day of hiking, skiing or snowshoeing the Baker backcountry.

Annie’s aims to please, so many items come with a vegan option or can be ordered on gluten-free crust. And best of all? They deliver! Annie’s husband Chuck is a long-time school bus driver, and for a price will bring your pie to you, often travelling as far afield as Marblemount (16 miles east), Sedro Woolley (24 miles west) or even Darrington (almost 30 miles southwest). That’s a big deal in a rural valley. This top-notch food and commitment to service are why Annie’s Pizza Station came in fifth in King 5 Evening Magazine’s Best of the Northwest in 2012.