The prologue leg of our four-day San Juan Islands bike trip was only 50 miles, stretching from Bellingham to our first stop on Lopez Island. Normally, I wouldn’t raise a brow at that mileage, but my bike weighed 62 pounds before it was fully loaded. Being a cargo bike, it was also over six-feet-long. Add another 20-ish pounds of camping gear and a healthy 14-month-old and this would be by far the heaviest load I had ever pedaled for any distance. Fortunately, it was all part of the plan. 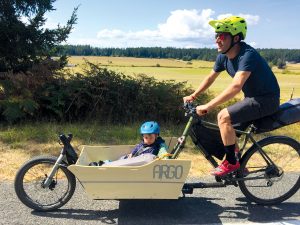 My wife Sarah, our son Sawyer, along with good friends Christine, Sean and their 22-month-old daughter June, had decided to cap off the summer with a multi-day bike tour in the San Juan Islands. Admittedly, touring through the San Juans by bicycle is about as remarkable as cedar smoked Pacific salmon served with a microbrew and kale salad in western Washington. But the wave of smiles and questions we received from the moment we rolled onto the ferry with cargo bikes full of kiddos, stuffed animals, box wine and camping gear gave us the sense we were bona fide bike tour pioneers.

On day one, Sean and I met early in the morning on the north end of Chuckanut Drive. Since our cargo bikes wouldn’t fit in the car, we had no choice but to pedal the 40 miles (empty at least) to the ferry terminal in Anacortes while Sarah and Christine drove the kids down with the rest of the gear. From there our itinerary went from Lopez to San Juan to Shaw and included quiet roads, lots of snack stops and maximal beach time. We’d do the whole thing under our own power (besides the ferry boats, of course) with kids on board.

Sarah and I were experienced cyclists but newbies at camping with a baby. We had just ordered our new cargo bike kit a few weeks prior and our longest trip had been a couple of miles on the Interurban Trail through town. Thankfully, we had terrific guidance from veterans Christine, Sean and June, who completed a two-week trip earlier in the summer. Their ambition inspired us when they rolled back into town looking wonderfully scruffy, with a refreshed glow like they could take on a bigger world … especially little co-pilot June. 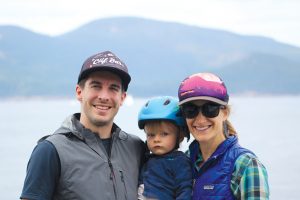 Camping with a baby is nothing to trifle with, and I wouldn’t recommend it for anyone not on the more stoic end of the emotional spectrum. That said, we discovered that cargo bike camping with a small child is enjoyable for kids and adults. Safe roads were our first priority and the San Juans are inviting in that regard. Cycle touring those quiet roads has been common for decades, and to us the risk was admissible. We opted out of Orcas Island; based on previous experience, we felt the hilly terrain wouldn’t be a good idea for this trip.

Once loaded and en route, it felt like a blend of sea kayaking and cycling all mixed into one. Like sea kayaking, it’s much easier to carry all of the essential family camping gear, including the baby. Like cycling, it’s possible to cover a greater distance with ease and less fuss with wind and currents. And as opposed to more action-oriented things like ski or bike trips, nobody is soured by staying behind with the kiddos while the others notch runs on the slopes. We all get satisfying exercise and fresh air together, the kids take in the sights along the way and we’re all ready to set up and lounge at camp once we arrive. 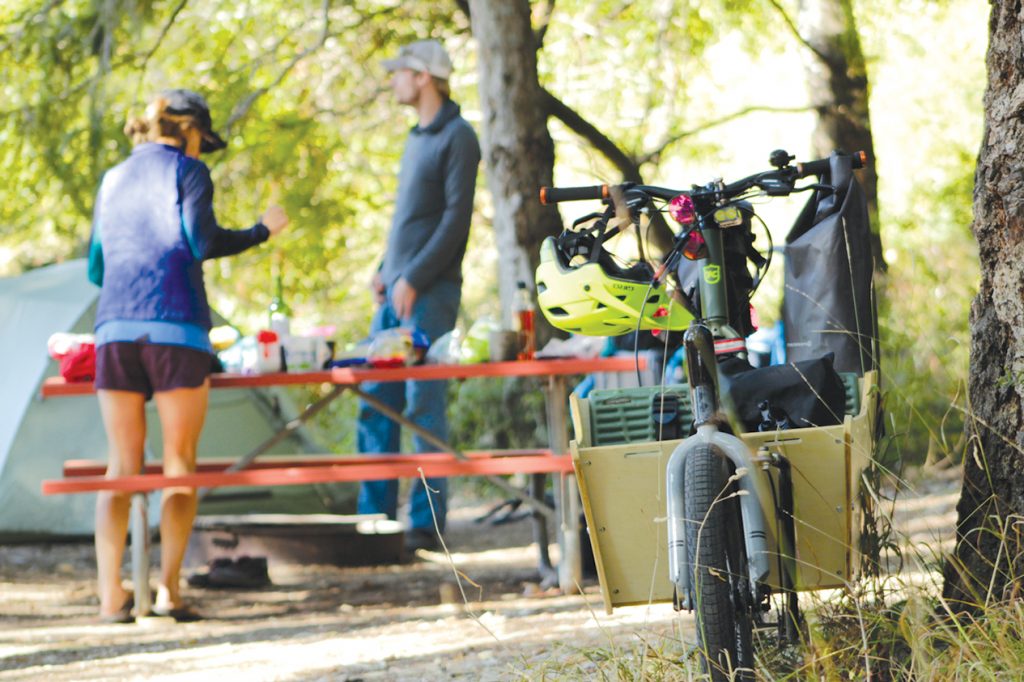 I’ll concede that we spent the first night in the lavishness of my great aunt’s house on the west coast of Lopez, where we treated her to a delicious meal with groceries from the Village Market. We spent the second night at San Juan County Park on the west coast of San Juan Island, the longest of our commutes to and from the ferry terminal. I was wishing for a few extra gears on the short but steep grades on the final stretch of West Side Road, but that was all undone by the satisfaction of zooming back the other direction the next day.

Zipping through a tunnel of Pacific madrone trees, Sawyer had fallen asleep in the cargo bucket, a little wisp of hair fluttering through his helmet. By now he was comfortable enough with the arrangement that it was just like a car seat, but with more fresh air and smells. Sarah and the others zoomed ahead while I slowed my pace to help ease any bumps in the road. I relished the slow pace and the views west across Haro Strait. Beds of kelp swayed off the shore at low tide and I wondered how much Sawyer would enjoy climbing around on the rocky shorelines when he’s older.

We resupplied each time we rolled through a town, supplementing dry foods with fresh veggies and refills of adult beverages. On our final night we made the short pedal to Shaw County Park, the most cozy and relaxed of all our stays. Perhaps that was because we were three nights in with tireless toddlers and feeling more competent with our camp tactics.

For those skeptical action-oriented new parents out there, it turns out that cargo biking is a way, for me at least, to experience a terrific oxymoron: to step out of one comfort zone while staying completely comfortable. That is to say, my comfort zone on two wheels typically involves some element of performance, speed, distance or other mix of benign masochism. It was gratifying to have none of those elements, save for the 100-pound bike to lug up the hills, yet still have every bit as much fun on this trip as I had on pre-kiddo outings. Instead of being stressful, I found it satisfying to feel the responsibility of our family outside the comfort of home. And like any backpacker has experienced, we were energized by the simple act of traveling under our own power with all of our needs at hand.

In all, this trip felt more like a vacation than an adventure, but I wonder what the kids would say if they were able to speak? I’ve abstained from using the “a-word,” for my own account of the term is jaded. However, it could be argued that young children are the only ones anymore who experience adventure in the original sense of the word. In the essay “Man Transcends Man,” writer Jacques Arnould explains how the earliest version of the word adventure was used in a time when fates were perceived to be in hands of the gods. Adventure was something that happened to you; it wasn’t sought out. Fortunately for our young kids, at least we hope, these adventures are good things for them. Our parental whims, though certainly not godly, involve taking them on multi-day bike camping trips, and setting out to expand our little family worlds.

Spencer Paxson is a professional mountain biker and owner of a sports performance coaching business. He is a Northwest native who has traveled the world but loves the mountains of home the most. peakbham.com