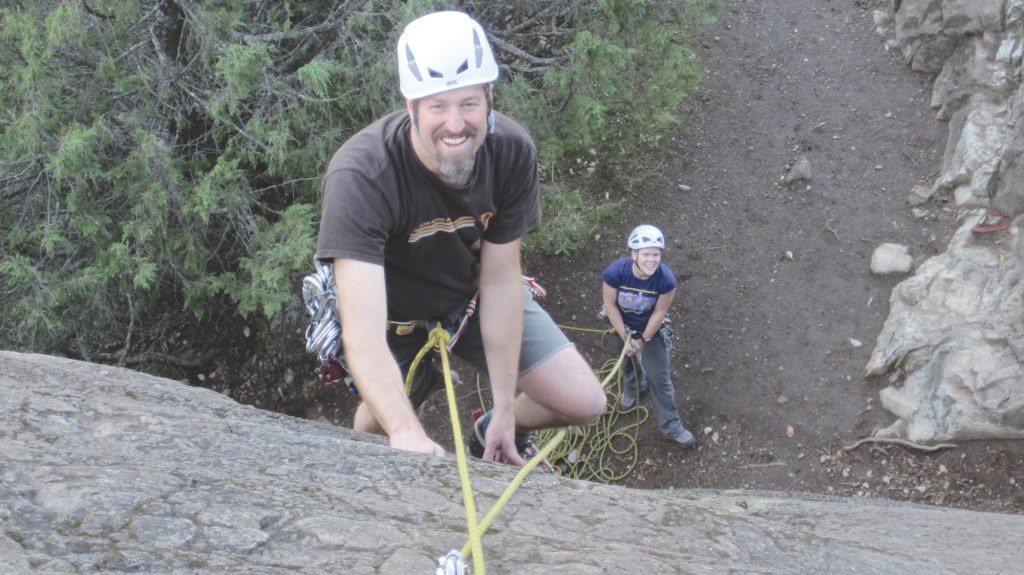 In the old days, most people learned to climb from a mentor who showed them the ropes, literally. These mentors would also teach new climbers how to behave at climbing areas. That’s not so common anymore. Now, most people transition to outdoor climbing after logging time at a gym and they don’t have the same kind of guidance that climbers had in the past. The result is that new climbers often make mistakes that irk not only other climbers, but also land managers.

Climbing ethics are important because the sport’s growing. There’s room for us all to have a good time if we treat each other and the crags with respect. But they’re also important because we’re under a microscope. Land managers are always watching. If we mistreat an area or if a dispute between climbers grows beyond the climbing community, it jeopardizes the crag.

It can take years to understand the nuances of climbing ethics, but there are a handful of universal ethical considerations that every climber should contemplate.

Nothing gets a crag closed down faster than human waste and litter. Indeed, nothing makes a crag less appealing than those things either.

Poop is a major problem at climbing areas across the country. New climbers often don’t know how to deal with it and leave stinky surprises for others to find. Sometimes they seem to think putting a rock on top of the pile will mitigate its impact. It doesn’t.

The best way to deal with human waste is to carry it out. Several commercial waste bag systems make this easier, but Ziploc bags work too.

If you’re unable to deal with packing out your waste, climbing outside probably isn’t for you. This is considered a baseline standard that everyone should abide by at hundreds of climbing areas throughout the United States and Canada.

If you are in an area with good, organic soil, it’s possible to bury your waste in a cat hole. Dig your hole at least 6 inches deep, at least 200 feet from any water source and nowhere near the crag. Pack out your toilet paper. Climbing tape, candy bar wrappers, gum, cigarette butts and other trash should always be packed out.

Climbing clubs and other large organized groups occasionally string ropes on all the climbs in an area to claim them. If people from the group are actively climbing on the ropes, there’s nothing wrong with this. The problem arises when the ropes are left empty while another party waits to climb.

North American ethics dictate that whoever gets to the crag first gets priority. But that doesn’t mean they’re the only ones with access for the day. Group leaders should work to accommodate all visitors.

Multi-pitch climbs have a similar issue. If you’re first to the crag, then you get priority access. However, if you are first and you are not a fast party, you should allow others to pass. Those who arrive later should understand that even if they’re faster climbers, they still must ask before passing.

Occasionally you will run into the person who thinks he knows everything. In some cases, he’ll provide unsolicited beta or advice. In other cases, he will tell you all the things you’re doing wrong.

If you’re that guy, nobody wants to listen to you.

There are legitimate reasons to step in and give advice. If someone is in imminent danger you should say something.

But it’s quite unusual for someone to be in such danger. It’s far more common to run into someone who’s doing something mildly wrong. In those cases, be friendly, talk to the person, make friends with them, and then provide gentle, nonjudgmental advice.

In most climbing areas, well-behaved dogs on a leash are acceptable. Barking dogs, dogs off-leash and dogs that bite people are not welcome. Ask yourself two things before bringing your dog: does your dog listen to you? If it doesn’t, it’s not acceptable at the crag. And second, ask yourself honestly if your friends like your dog. If they don’t, strangers probably won’t either.

Not everyone has the same musical tastes. In fact, many people like to hear the sounds of nature when they go climbing. It’s fine to listen to headphones, but speakers are not considered acceptable in either a crag or a multi-pitch environment.

Rock climbing is one of the fastest growing sports in America. The Outdoor Foundation estimates that 4.6 million people climb each year. Certainly a large percentage of them only climb indoors, but we all know they won’t stay there – climbing outside is just too much fun. Educating yourself and others in climbing ethics will ensure that everyone has a good time and that the crags and mountains of North America will remain open and clean for generations to come.

Want to get involved with protecting your favorite rock climbing access? Get active with these organizations: