Not just for the fringe

The cynics have called it an “abomination of the noblest invention.” The visionaries have deemed it a portal to unobstructed adventure. It is the fat-tired bicycle, the recently popularized phenomenon that is enabling riders around the world to explore new environments and new seasons on two wheels.
“Fat bikes,” as they are popularly known, are a great example of action sport’s long history of innovation fueled by its most eccentric, intrepid characters. These balloon-tired behemoths were pioneered in the 1990s by adventurers in extreme climates, from competitors in Alaska’s snowy Iditabike challenge, to explorers in the desert Southwest.  Eager to solve the unique challenge of riding on soft, slippery surfaces like snow, sand and mud, early designers sought to widen the footprint of their tires as much as possible.

Several years of tinkering later, and fat bikes are now one of the fastest growing segments in the bicycle industry. One can find $6,000 state-of-the-art carbon fiber beauties at specialty bike shops, and $250 steel clunkers at Target. Fat bikes are even popular among the race crowd; the inaugural “Fat Bike National Championships” was held on specially groomed snow trails in Ogden, Utah in February 2014.

For the novice rider, fat bikes are easy to maneuver and balance, especially at slow speeds. For the experienced rider, the massive tires give turning and descending a whole new level of entertainment. Whether you have a penchant for quirky adventures such as riding a bike in the snow or sand dunes, looking for an answer to year-round exercising and commuting or you are just plain curious, fat bikes are worth a look.

Many hardcore mountain bikers from west of the coastal mountain ranges might roll their eyes at fat bikes, and that is understandable. Here in Cascadia we are blessed with an environment that allows us mountain bikers to ride world-class dirt trails year-round. Those inclined to shred the dirt will typically do so on more slender tires, or they will pull out their skis once the snow flies. That said, plenty of people live in places where year-round riding is hampered by sand or snow.

In fact, just east of the Cascades lies one of the premier recreational fat biking resources in the country. Between the towns of Mazama and Winthrop, Methow Trails has allowed fat biking on a portion of its 120-mile Nordic ski trail system for the past two winters. It was one of the first trail systems in the nation to open up to fat tire biking, and according to marketing director Kristen Smith, it was not without a big uproar from the local cross-country ski community.

“We had strongly worded emails, letters to the editor in the local paper, you name it,” Smith said. “There was fear that the bikes would damage the trails, but in fact they are far less destructive than someone on skis. Now, we’re finding that a lot of those people who were against it are some of the most passionate fat bikers.”

Smith said it’s hard not to enjoy the feeling of riding a fat tire bike on snow. “It’s funny, you put someone on a fat bike for the first time and they just start laughing because it’s so fun,” Smith said.

Along with local businesses like Methow Cycle & Sport, Methow Trails is leading the charge for fat bike advocacy regionally and nationally, partnering with local non-profits, public agencies and the Methow community to provide pristine groomed single-track, and advocating for winter access to the region’s state parks.

Should you find yourself east of the Cascades this winter, or if you need a change of pace to deal with the effects of the El Niño Southern Oscillation, consider adding fat biking to your bucket list. Visit your local bike shop to learn more, and if you’re in the Methow Valley, fat bikes are available for rent at Methow Cycle & Sport, Goat’s Beard Mountain Supplies and North Cascades Cycle Werks. Reservations are recommended!   x 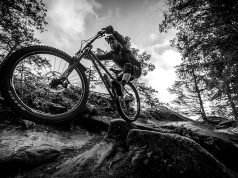