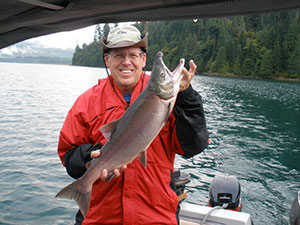 Mist rises from the deep, green water, and there is a faint tang of wood smoke in the air as campers slowly begin to stir. Boats are slipped into the water as the sky lightens, and a rosy glow lights the tops of Mt. Baker and Mt. Shuksan, looming over the lake to the west. For most folks, weekend mornings mean sleeping late and enjoying a leisurely cup of coffee on a sunlit porch but for a handful of hardcore fishers, the perfect way to start a day is rising in the pre-dawn light and loading up a boat to head out onto Baker Lake after sockeye salmon.

Baker Lake has recently become one of the region’s premier sport fishing destinations. Improvements at Puget Sound Energy’s Baker River hydroelectric project have led to dramatic increases in sockeye salmon returns in the past few years, and in 2010 a sport fishery for the prized game fish opened for the first time. In the two summers since then, fishing for sockeye salmon on Baker Lake has become one of Whatcom County’s finest recreational fishing options.

Mike Carey spends every day he can fishing Baker Lake, and loves to share tips on how to catch sockeye (check out his reports and videos at washingtonlakes.com). An early start can be key; Mike tries to be on the water by 5:30 a.m. Fishing tends to be best towards the north end of the lake and in the early to mid-morning, with occasional lulls in the action. Early in the day, fish may be found in relatively shallow waters (20–25 feet), but by late morning, the best fishing is deep (40–50 feet). In 2012, Mike and his fishing companions landed 26 fish in six trips (with a two-fish per person limit). He recommends trolling slowly, and using a variety of gear, trying different colored hooks, bait and attractors to see what the fish want.

Baker Lake is open for fishing from the fourth Saturday in April to October 31. Fishing can be excellent for kokanee (land locked sockeye salmon) in the early spring and late fall, but the real fun begins in July, when adult sockeye begin to show up. Adult sockeye return from the sea from June through August, and are released to the lake starting in July. The duration and timing of the sockeye fishery varies with in-season abundance. Rules for 2013 have not yet been set, so check the Washington Department of Fish and Wildlife’s website at wdfw.wa.gov/publications/01384/. According to Brett Barkdull of WDFW, 2013 should be a decent year for Baker Lake sockeye, with a preseason forecast for 21,500 returning fish.

Recreational access to Baker Lake is a breeze. The nine-mile- long lake is located about 13 miles up the paved Baker Lake Road, off Highway 20 just west of the town of Concrete.

Kulshan, Panorama Point, Swift Creek and Shannon Creek also have campgrounds, and camping the evening before to make that early start is a great way to enjoy Baker Lake.
Campgrounds fill quickly on summer weekends, so get there early or reserve a site ahead of time.

Non-anglers can enjoy swimming, hiking the east bank trail or checking out the Shadow of the Sentinels interpretive site. X

Dam the water, not the fish

In recent years, PSE has implemented fish management projects at the Baker River project as part of a new 50-year license granted by the Federal Energy Regulatory Commission. In 2008, PSE completed an innovative “floating surface collector” on Baker Lake that lures and safely captures juvenile salmon for downstream transport around the two dams.

In its first year of operation, the $50 million apparatus produced the highest outmigration rate on record for juvenile Baker River sockeye. Other improvements include a second floating surface collector at Lower Baker Dam (completed this spring), a new fish hatchery and an advanced upstream trap-and-haul facility located just below Lower Baker Dam.

The three highest returns of Baker River sockeye have all been in the past three years, with 48,014 returning in 2012. PSE offers free tours of the facility during the summer months.
Info: pse.com/inyourcommunity