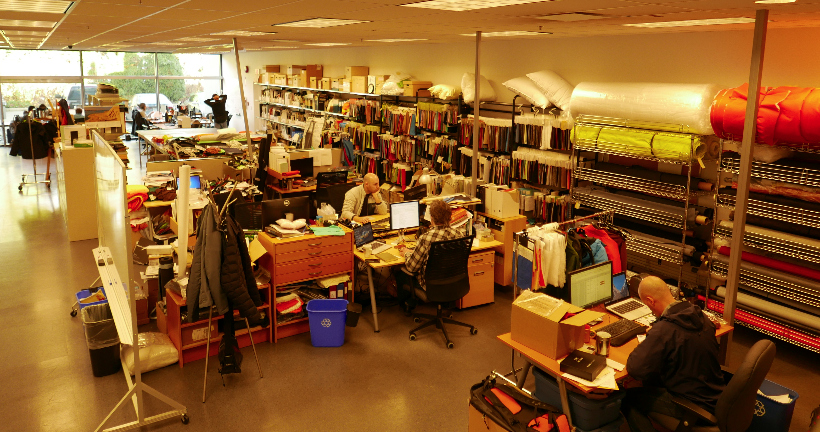 On the second floor of the Arc’teryx design facility in North Vancouver, the first thing a visitor sees after climbing the stairs is a custom machine for laminating technical fabric.
Like some of the clothing and gear prototypes scattered throughout the facility, Arc’teryx doesn’t want visitors to take pictures of the machine. That’s because – like the clothing prototypes – it doesn’t exist outside the office and they don’t want competitors to see it.
“We don’t just push the envelope with gear, we push the envelope with manufacturing,” Arc’teryx communications director Jo Salamon said. “We get to MacGyver a lot of machines.”

The design center isn’t just filled with computers – though there are plenty of designers working on computers – it’s also packed with fabric, thread, pack prototypes made from construction paper, and people working with their hands.

This hands-on approach to design is one factor that allowed Arc’teryx, a company known for its simple but highly technical clothing, to break into a new market – avalanche airbag backpacks. Their pack, called the Voltair, will be available this fall.

The Voltair features a 150-liter airbag that bursts out of the top of the pack with the pull of a handle, helping an endangered skier float to the surface of an avalanche. It was designed in North Vancouver, tested 20 minutes to the north on Mount Seymour, and manufactured 15 minutes south in Burnaby.

The local process means that pack designers don’t have to wait weeks for samples of the pack to come back from an overseas manufacturer.

Designwise, the pack is one of Arc’teryx’s more complicated products. The company has been working on the pack for more than six years, said Peter Hill, a lead designer with 30 years of experience building backpacks. 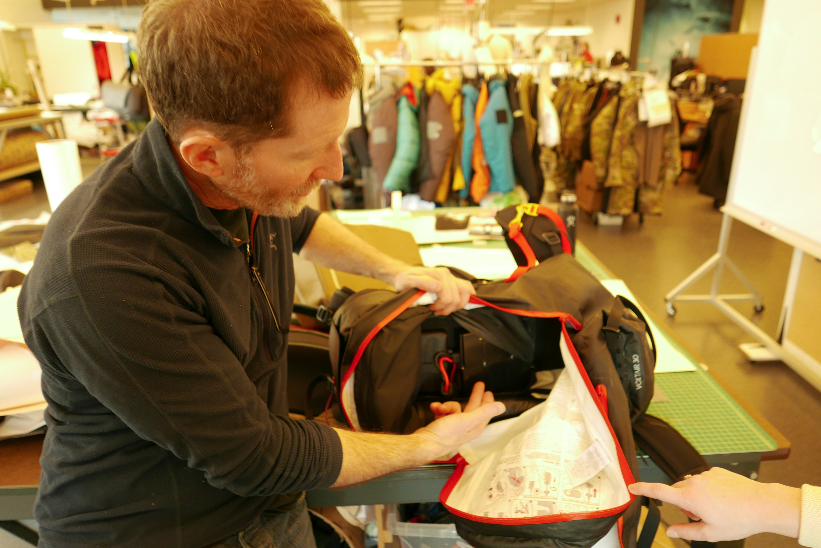 Hill came on board at Arc’teryx two years ago. His workspace is covered in works-in-progress, including samples of the top of the pack, which he built over and over on top of a plywood form. The compartment with the balloon was one of the many “cruxes” of the design, Hill said. The balloon had to release from the pack in all conditions, including after being soaked with water and frozen for 24 hours, and still go back into the compartment afterward.

Would that number of samples and tweaks have been possible if the company didn’t manufacture in Vancouver?

“The short answer is no,” Hill said. “Everyone else will do designs and then go back and forth to Asia. It takes three weeks to a month to send something to Asia and get it back.”
The Voltair pack works on the same principles as the dozen or so other avalanche airbag packs on the market. Hill explains it like this: when you shake a can of mixed nuts, the biggest nuts rise to the top.

In that regard, Arcteryx’s avalanche airbag pack doesn’t break any new ground.
The Voltair, like Black Diamond’s JetForce pack, uses a powerful, battery-powered fan to inflate its balloon, rather than a cartridge of compressed air, which is more common in avalanche airbag packs.

The fan-powered balloons can be deployed over and over, whereas the cartridge-powered packs can only be deployed once; then the cartridge needs to be refilled with compressed air at a dive shop or fire station.

Arc’teryx’s bag has some clever tweaks and improvements, but Hill says the real visionary thinking came from the people who first thought to put a balloon in a pack.

Statistics paint a favorable picture of airbag packs. In a 2014 article in The Avalanche Review, Pascal Haegeli, a Canadian avalanche researcher, found that an inflated airbag pack reduced the death rate for people in big avalanches from 22 percent to 11 percent. In other words, it saved about half the people who would have died otherwise.But 20 percent of the time people with airbag packs were actually in avalanches, the airbag, for one reason or another, didn’t inflate. Incorrect use caused most of those non-inflations, the study found.

“I am a big fan of users being able to regularly practice inflations with their airbag,” Haegeli said in an email. “This is a general advantage that battery-powered airbags have.”

Hill thinks the non-deployment problem goes beyond a lack of practice. A cartridge-powered pack can only be inflated once per trip. Someone could hesitate to pull the trigger because they won’t be able to use the airbag for the rest of the trip.

“I’ve been out with people who got buried up to their thighs in slides and didn’t use the airbag because they were waiting to see if they would need it,” Hill said.

If you prematurely pull the trigger with a fan-powered pack, the consequences are low: your friends laugh at you, then you stuff the balloon back into the pack and you’re good to go, Hill said.

That helps condition the user to pulling right away, at any sign of instability or cracking. That way, users train their muscle memory and develop a habit of pulling the handle to deploy the airbag.

“With this guy, you can set it off repeatedly. The penalty for being scared is not that much.” Hill said. “The impact is, you do it automatically rather than wait to see if
it’s necessary.”   x 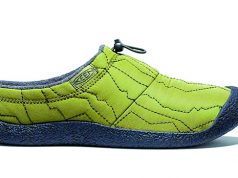