I’m just drifting off to sleep when I hear it, far down the Big Beaver Valley … Thud.

The wind rushing up the valley sounds like a train approaching.

Lightning flashes across the sky and thunder echoes as I groggily try to make sense of the noises just outside the tent. “Kit, wake up!” I said to my climbing partner, fast asleep in the tent next to me. “Do you think those are trees falling?”

Crash! A tree lands much too close to the tent for my liking. I bolt out of the tent and into the thunderstorm that is suddenly upon us. Kit wasn’t far behind as I ran to the biggest tree nearby – flashing, crashing and booming were exploding all around us. We stand in our underwear in the rain, huddled around an old hemlock, running from one side to the other as trees and branches fall in the forest.

Thunderstorms weren’t on our mind a couple days prior when we hiked down to Ross Lake from Highway 20 to meet the water taxi that took us to the Big Beaver Valley and the start of the nine-mile trail to the base of Mt. Prophet. Prophet is a modest peak by North Cascades standards. It stands 7,640 feet tall at the eastern gateway to the fabled Picket Range, a rugged subrange of the NCs. Overshadowed by its more famous neighbors, Prophet is rarely climbed and then almost exclusively by two non-technical routes. Back in 2007, as I bashed my way out of the Northern Pickets, I spied a prominent rib that descended over a thousand vertical feet off the southwest side of the peak. It looked like an interesting climb. Surely it had been done before.

I consulted Fred Beckey’s “Cascade Alpine Guide” when I returned home and turned up nothing, but didn’t ask around our tight-knit climbing community either. I forgot about the rib for a decade, distracted by the familiar refrain of young kids, work and family life. But somehow, someway, I started thinking about Mt. Prophet again in 2018.

The amount of information online had exploded and Mt. Prophet even had its own SummitPost.org page, though everything I could dig up said that all ascents had avoided the upper southwest rib where it narrows and steepens in an aesthetic sweep to the summit. SummitPost even had an ominous warning: “The rib has cliffs on either side and no one has yet explored the possibility of climbing it directly to the summit. That could prove to be a bad idea.”

“No one has yet explored the possibility of climbing it directly to the summit. That could prove to be a bad idea.”

It might surprise some to know that there are still unexplored areas in our local mountains, but there are. And there are people out there climbing routes with no recorded ascents, no trip reports and no social media posts. Sometimes the trips end in minor “epics,” involving scary climbing, dense brush, horrendous gear-eating descents and, quite commonly, failure. After all, there are reasons that most climbers stick to the more traveled areas. However, there is something to be said for solitude in our increasingly crowded mountains, and trying to climb a route for the first time is a good way to escape the masses.

But how does one pack for something with no information? In the case of Mt. Prophet, we were armed with a 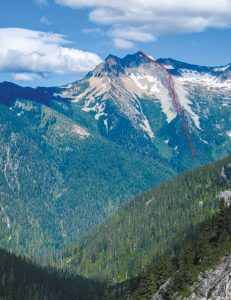 photo and some rumors. The photos I had made the rib look reasonable for a middle-aged dad like myself (probably no worse than easy class five climbing), but the rumors indicated that there was a reason that all recorded ascents had avoided taking the rib head on.

In the end, we opted to pack on the heavy side, bringing a medium rack of climbing gear, rock shoes, a 60-meter rope, crampons, ice axes and helmets. Mt. Prophet’s a long way from the road (we planned for three days), and we didn’t want to have to turn around for lack of gear. With the addition of my DSLR, this made for a heavy load as we toiled up the Big Beaver Valley on our first day, glad to have saved six miles of walking by taking the water taxi.

Our first night low in the valley was quiet and we turned in early in anticipation of the pre-dawn start the next day. As usual in the mountains, I didn’t sleep well, thinking of the next day and what could be in store for us. This is the yin and yang of the mountains for many of us – stress and challenge much of the time, but a sense of reward, camaraderie, and accomplishment when it all falls into place. 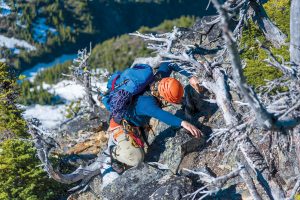 Kit and I were certainly in the yin state the next morning as we picked our way up through steep brush to the base of the southwest rib. We left the trail within minutes of leaving camp, climbing 3,000 vertical feet to where we took a break and donned harnesses and helmets. The first bit of the ridge looked like a scramble so we left the climbing gear in the top of our packs.

At about 6,000 feet, the rib narrowed dramatically and steepened, but remained exposed “class 3” scrambling. This refers to terrain where you use hands and feet, but where a slip would rarely involve serious injury or death. Several sections looked like they would require rope, but again we found work-arounds. It kept us guessing as we worked our way up the mountain. It was a novel place to be – we had never tried to climb a route with no known ascents before.

The southwest rib finally eased off at 7,200 feet for the final easy slopes to the summit. As is our custom, Kit and I shook hands on the summit and slowly turned to take in the view. The Pickets rose like their namesake fence to the west and to the east a glacier dropped off the summit of Prophet toward fjord-like Ross Lake snaking its way to Canada. We lingered for hours on a warm summer day, in no hurry to descend to the brush of the Big Beaver.

We knew from route descriptions that the descent off of the mountain’s south side was non-technical and we could relax with the challenges of the morning behind us. We chatted as we descended, talking about the quality of the route and how future parties could leave the climbing gear behind and move much more quickly and pleasantly up its exposed and aesthetic crest. In keeping with the theme of the mountain we even came up with a name for the rib: “Jacob’s Ladder,” from the story in Genesis 28.

So we were in high spirits as we bashed our way into camp that evening, eating much of our extra food, sitting by the fire and having a few sips of the whiskey that we had saved for the occasion. The fear of the unknown had been confronted, and we were safely below treeline with an easy hike out to the boat the next day. This was the other, truly fun side of mountaineering.

Then, we saw distant flashes in the sky. 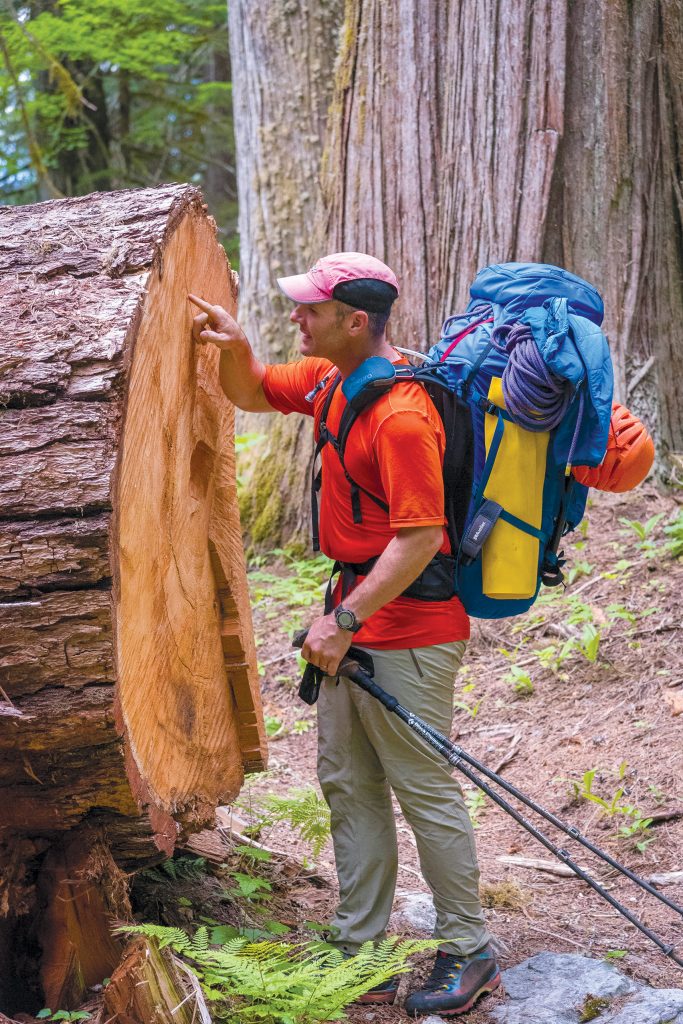 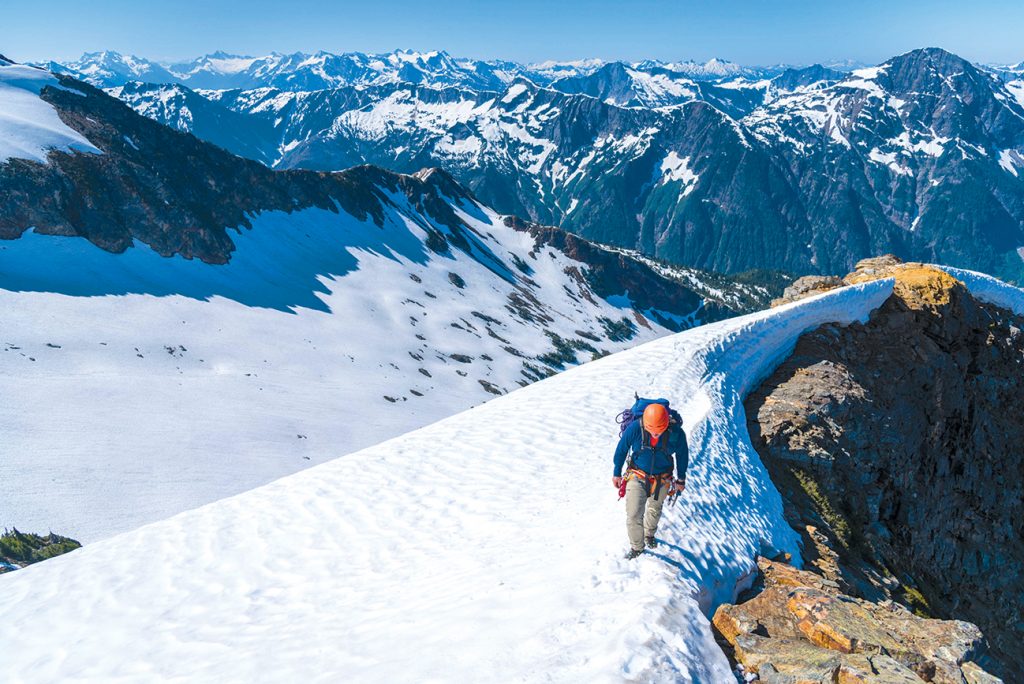