Transition began over a game of Ping Pong.

The owners and employees of Transition, a Ferndale-based mountain bike company, are a funny bunch. Call their headquarters and the guy on the voicemail will walk you through the menu in a Hank Hill Texas drawl. Check the headshots on their website and you’ll witness face-making talent at an elite level. Walk into their office and you will be greeted by a Chihuahua and friendly designers, one of whom will most likely speak in a bad French accent. 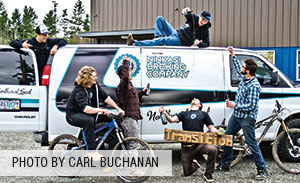 When it comes to mountain bike design, however, the folks at Transition do not mess around. They have a 3-D printer in their office to give form to design ideas before mock-ups are turned into working prototypes that are vigorously tested before becoming final products. Transition bikes have won awards such as the “What Mountain Bike Magazine Connoisseur’s Choice 2012” for their Bandit 2 (see our Summer Gear Guide on page 24 for the latest model). They are known throughout the mountain-biking world for builds that are a pleasure to ride.The design of every Transition bike is rider-centric. Twenty-four professional team riders from around the world inform the design of each new model, as does every member of the Transition crew in Ferndale. The homepage of their website states “Rider owned for life,” and yes, owners Kevin Menard, Kyle Young and all Transition employees are prolific mountain bikers. They have dirt jumps and a pump track behind the office, and participate in mandatory rides pretty much every day.

Young and Menard started the company in Seattle in 2001 while working for T-Mobile.
“One day we were playing Ping-Pong on our break and I said, ‘We should start a bike company,’ and he said, ‘Yeah, I think we can do this.’ And we just literally, that easy, started it,” Menard said. “It was easy to start but not that easy to get it going.”

Neither of them had an engineering degree, but they knew what they wanted in a bike.
“We kind of relied on the factory’s engineer. We came up with specs, we would draw rudimentary pictures and they would make it work. Slowly over time we started learning things like AutoCad and SolidWorks, geometry design and suspension kinematics.”

After four years of working full time at T-Mobile and growing their company out of Menard’s basement, the pair got permission from their wives, quit their corporate jobs and moved the operation to Ferndale.

“We were driving up here all the time to mountain bike so we said ‘let’s do Bellingham’,” Menard said. “Our wives were down with it, so there was no looking back. I don’t think we will ever move. We love it.”

Transition frames are fabricated in Taiwan and assembled in Ferndale before being shipped to distributors around the world. The warehouse in Ferndale is a like a candy shop for bicycle gear heads. Buckets full of shiny new derailleurs, suspension forks, cassettes, cranks, handlebars and every other bike part – all from top-tier manufacturers such as Shimano and Fox – line the aisles and allow the Transition gurus to fulfill shop orders to a near-infinite level of customization.

“It’s a little time consuming, but it offers the most flexibility to the customer,” Menard said.
Even with 120 dealers in the U.S. and nearly 50 in Canada, Menard said Transition actually sells slightly more than half its bikes to customers outside of North America.

That global reputation came from years of serious design improvement. A wall in the office displays the frames of years past, and Menard said it is always a trip to see how far his company has come.

“You look at the evolution of our bikes and you can tell we’ve learned a lot,” he said. “It comes from being rider-centric, riding a ton and riding at a high level, and being in tune with knowing what works and what doesn’t.”

As seriously as they take their bike design, the Transition crew is equally committed to advocating for the local biking community in political issues such as trail access (see “Mountain Biking,” page 41).

Amidst all that seriousness, they never forget to have a good time.

“Last Christmas we bought everybody little 100cc pit bikes and we were tooling around outside the warehouse,” Menard said. “Some of the neighbors get annoyed with us, but it’s all good.” X

Where to buy transition bikes
Transitionbikes.com 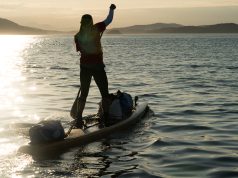