How well do you know the North Cascades?

The Pacific Northwest loves trivia. There’s no question about it. In cities throughout the region, you can find a group trivia game at a bar or brew pub most nights of the week. It’s also full of mountains and people who love the outdoors.

It occurred to us that the readers of the Mount Baker Experience might enjoy a combination of mountains and trivia. So without further ado, please try your hand at this mountain trivia game…

1) On August 10, 1911, a group of 14 runners left Bellingham for the summit of Mt. Baker. The group was competing in the first Mt. Baker Marathon, America’s first adventure race. Some runners approached the summit via the Coleman-Deming route, whereas others approached via the Easton Glacier. Getting to the mountain was incredibly challenging as well because:

2) Joe Morovits made the first ascent of the Park Glacier Headwall in 1892, solo. The man’s partners climbed to the Cockscomb and then elected to descend. They felt that the upper mountain was insurmountable and that only a crazy man would risk the summit. Joe famously continued on his own by…

a) Using his bowie knife as an ice axe.
b) Crawling up the remainder of the mountain.
c) Chipping footholds with the butt of his rifle.
d) Punching nails through the sole of his boots to create makeshift crampons. 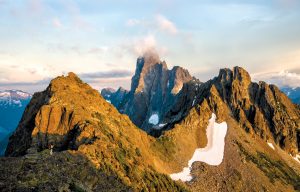 into this mountain just north of the Canada/U.S. border. At the time it was considered to be one of the worst air disasters in history.

4) It’s well known in Bellingham that the native name for Mt. Baker is Komo Kulshan, or Kulshan. Unlike Mt. Baker, Mt. Shuksan kept its native Lummi name. What does Shuksan mean?

5) This climber who put up dozens of first ascents in the Cascades was also the godfather of rock climbing at Mt. Erie, near Anacortes.

6) City Park is a famous 5.13+ rock climb in Index. This extremely clean crack was first free-climbed by Todd Skinner in 1986. Todd had to famously do what before he could make a successful ascent of the crack?

a) Use a blowtorch to burn away the axle grease that someone placed in the crack to keep him from climbing it.
b) Put on a pair of hatchet-shaped prosthetic feet.
c) Throw up. He had food poisoning.
d) Race to the base in order to get on the route before his rival could. 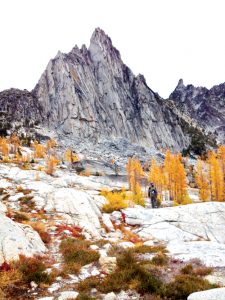 7) The first ascent of Prusik Peak was made via the East Ridge by in 1948. The first ascent party had an incredibly hard time with the last section of the route. To summit the mountain they were required to:

a) Pound pieces of wood into a crack, one piece above the last, in order to make a makeshift ladder.
b) Lasso the summit and then climb the rope with a friction hitch.
c) Climb onto one another’s shoulders to reach a hold.
d) Jump off a minor summit and over a deep gap to reach the true summit.

8) Mt. Waddington is an iconic Canadian peak. Fritz Wiessner made the first ascent in 1936. A pair of teenage brothers made the second ascent of this technical peak in 1942. Who were the teenagers? 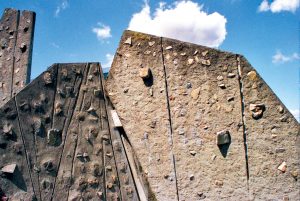 10) One of the very first outdoor artificial climbing walls in the United States was built at a university in Washington state. The wall was constructed in 1975 to decrease the number of climbers practicing their craft on university buildings. Unlike modern climbing gyms, climbing access to this structure is free. This incredible and historic wall can be found:

11) Mt. Baker Ski Area hosts one of the most accessible and reliable ice climbs in Washington state. This beautiful flow can easily be seen from both chairs one and two. Name this classic waterfall climb.

12) In 1961, nearly 12,000 cars crowded the base of this iconic Canadian Peak while Ed Cooper and Jim Baldwin battled their way up a sheer face on a first ascent. The press was on hand, just waiting to get a shot of a body falling from the 1,700-foot cliff. What is the name of the peak the pair climbed?

1) b – The cars arrived at the trailhead first.
2) c – Morovits was unable to use the rifle to cut steps on the way down and had to down-climb the tiny holds he’d made on the way up.
3) d – A team of mountaineers found the plane wreckage the following May.
4) b – This is a modernized term based on the original Lummi word.
5) d – There was a time when you would regularly see Dallas Kloke poking around at Mt. Erie. Tragically, he was killed in a climbing accident in 2010 when a large boulder came loose in the Pleidades.
6) a – A number of locals that  want a visiting climber to get the first ascent. They smeared grease from the nearby railroad tracks into the crack.
7) b – The friction hitch used was the prusik-hitch, and thus the mountain was named.
8) a – Fred and Helmy battled never-ending brush and devils club while carrying 70-pound packs to make the second ascent of a technical route on Mt. Waddington.
9) d – Lassen last erupted from 1914 to 1921, less than a blink in geologic time.
10) b – The historic and internationally recognized UW Rock is under threat. The 2018 University Master Plan shows an unidentified building at the location of the current climbing structure.
11) c – This climb can now only be accessed from the base by lead climbers. The ski area has closed access to the top. The route ranges from WI 4 to 4+ depending on which way it is climbed and its current condition, so leaders should know what they’re doing.
12) d – A documentary entitled “In the Shadow of the Chief” chronicles Baldwin and Cooper’s epic ascent.