THE LOCAL CRAG
Story and photos by Ian Ferguson

Rock climbing on Mt. Erie.
If Ky Nayfield slips or loses his balance, he will fall 20 feet before the rope catches him and swings him back into the rock face.

He’s got three square inches of contact holding him on the cliff: two from the rubber of his shoes, pasted into a vertical seam in the granite below him, and one from the fingertips of his left hand, crimped on a tiny horizontal edge.

He’s focused only on clipping the rope into the carabiner hanging above his head. The cares of work and domestic life are so far in the back of his mind they might as well belong to a different person or a past life. With a deft flick of the wrist, he clips the bolt. 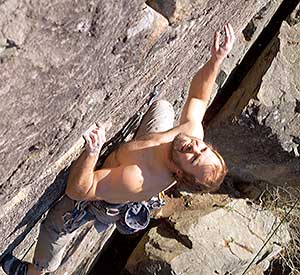 “Yeah, Ky!” yells Zach Bastow, who holds the rope on belay from the ground below. Ky breathes an inaudible sigh of relief, but it’s short-lived. He still has three bolts to go before he can break his concentration and appreciate the beauty of his surroundings.

Far below, thick forests give way to green fields, then indigo lakes and bays alternating with emerald island hilltops all the way to the white-capped Olympic Range on the horizon. It’s a view unlike any other.

Situated within the 2,800-acre Anacortes Community Forest Lands, Mt. Erie attracts thousands of visitors every year. Most drive or hike to the 1,200-foot summit for spectacular views on clear days of Mt. Baker, the San Juan Islands, the Olympic Range and Victoria, B.C.

“Cragging,” in the climbing world means heading to a local cliff to climb multiple routes that aren’t particularly long or hard to get to. The nearby North Cascades are an alpine climber’s paradise: massive granite walls, technical alpine ascents and burly objectives, but climbing in those mountains is often a major commitment requiring a long approach and lots of training, preparation and gear.

For an afternoon jaunt with friends, Mt. Erie is tough to beat. It is seldom crowded because most Seattle climbers frequent North Bend instead. It’s adventurous because crags are scattered and hidden among the trees. “It’s known as a place where you have to explore a little bit,” said Jason Martin, an American Alpine Institute guide who has been bringing clients to Mt. Erie for 15 years. “It’s on the edge of the rain shadow of the Olympics, so it’s often dry there when it’s raining in Bellingham,” he added. Most importantly, the climbing is fantastic. 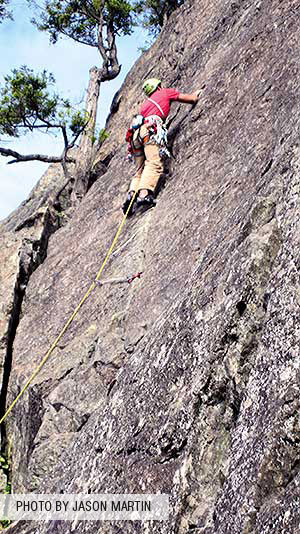 “I do believe it’s a little more technical than a lot of the other crags in Washington,” Martin said. “It’s got these small face holds, somewhat slabby, slick rock and there’s a wide variety of climbing.”

Jim Thompson lives five minutes from the base of the crag. He started top roping at Mt. Erie in 1998, and now leads routes there with his wife and two sons. He’s writing an updated guidebook on the area, which is scheduled for release this summer and reportedly contains more than 400 climbs.

For now, the only guidebook dedicated to the area is sold out, but can sometimes be found in hand-copied form at the Lake Erie Grocery on heart Lake Road in Anacortes. Author Dallas Kloke was among the first to explore the cliffs of Mt. Erie in the sixties. He was a well-loved and prolific local climber who continued climbing up until his death at the age of 71 in 2010. Another guidebook, “Weekend Rock: Washington” by David Whitelaw includes a section on Mt. Erie.

Climbs at Mt. Erie range from third class scrambles, which the everyday hiker can manage without ropes (albeit dangerously) to Yosemite grade 5.14, which only the most experienced or talented climbers can climb. The Powerline Wall is popular because it’s easy to find and has a range of climbs from 5.7 – 5.10d. From the top parking lot, follow overhead power lines to the top of the cliff, then bear right on a path that curves around the right side of the climbing area. Once you’ve found the climbs, gear up, climb on and enjoy the view.

GETTING THERE:
Mt. Erie is 40 minutes south of Bellingham, an hour and half north of Seattle. From I-5, take exit 230 for WA-20 toward Anacortes. Follow Route 20 W for 11.7 miles, then turn left to stay on State Route 20 W. After two miles, turn right onto Campbell Lake Road. In 1.4 miles, keep right at the fork, continuing onto Heart Lake Road. You’ll see signs for Mt. Erie after a mile and a half. X