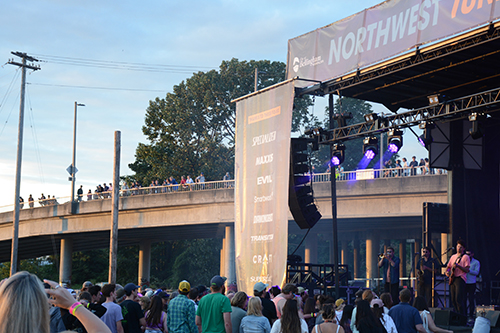 Story and photos by Ian Haupt

Organizing an inaugural event in any year is difficult. Building connections with sponsors, vendors, volunteers, the community, the city and cultivating a crowd take time and trust. They also require some degree of certainty and security. Which we had little of in 2020 and 2021. A global pandemic will throw a wrench in all that. Shiver.

This summer, Northwest Tune-Up put on its first three-day bike, beer and music festival after a two-year postponement. It had an elite level enduro race on Galbraith Mountain, mountain bike demos available from up to 30 manufacturers, skills courses and transport to local trail systems. On Bellingham’s downtown waterfront, there was music all day and night, featuring headlining bands of PJ Morton, The Dip, Devotchka and others, along with pump track races, local artists vending, an assortment of food trucks and an open beer garden.

For many people in Bellingham and the surrounding areas who ride bikes and enjoy a good time, attending should seem like a no-brainer. This could be the town’s summer celebration. It had the makings of it, at least, but fell short.

Early announced headliners disappeared from the lineup; few attendees who said they actually purchased tickets; groups gathered on the Chestnut Street bridge to watch music acts from outside the festival grounds; three full rows maximum in front of the stage during headlining sets; the ever-draining amount of space between locales and people; the beer garden open all afternoon with 24 breweries, and some saying they poured only 20 beers.

It was a first-year event that didn’t quite get the numbers it planned for and was working out the kinks. (They were scheduled for Thursday.)

Some might point to the pricing as a reason. A single day pass was $75, while a three-day VIP pass was $350. That seems steep if the access to racing and demos isn’t considered. A four-hour demo at Transition Bikes is $75 alone — they, however, are nice enough to give proceeds to WMBC. But not everyone is a biker. 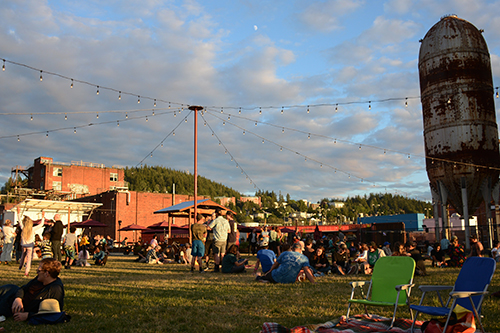 Summers are busy, and time and money isn’t infinite. The pandemic’s lingering impact cannot be ignored. People choosing an online world over a real one. All could have an effect to some degree.

Watching Wolf Parade kill it Saturday night to a crowd of subdued excitement, I thought, “Bummer, what happened?”

Whatcom Mountain Bike Coalition (WMBC) executive director Eric Brown and Freehub Magazine founder and publisher Brandon Watts, who have been friends since 2009, began talking early on about how Bellingham was missing something cool, like a festival.

In 2015, when Georgia-Pacific West was demolished and the port started development at the downtown waterfront, Brown and Watts met with Port of Bellingham executive director Rob Fix to get a tour of the property. With a tentative idea in mind, Brown and Watts ran it by Fix. Fix, who’s also a mountain biker, said he was interested, and they kept the conversation going over the years.

In 2017, Bellingham Whatcom County Tourism announced its signature event grant program, and Brown, Watts and a couple other local businesses pitched the idea of a mountain bike, beer and music festival. Brown said, thankfully, they lost that grant, because the waterfront area needed more work and development to host a festival.

The port approved WMBC’s development of the pump track in 2019, which grew to what it is now — multiple pump tracks, jump lines and a skills course — during the design process.

Then the team assembled again with more businesses and key figures, like music director Hunter Motto of Seattle music venue The Crocodile and former Downtown Bellingham Partnership director Nick Hartrich, on board. And this time won the grant, with the festival supposed to be held in June 2020.

Brown said they canceled those plans in late-February 2020 due to uncertainty from the pandemic, as cases were rising in Europe and the U.S. had yet to implement shutdowns. It was postponed for the foreseeable future until in early 2022, Brown said they decided to make it happen. With the festival scheduled for July 8-10, he said it wasn’t until spring 2022 when planning really began. The team brought on staff and went full gas to make it happen.

Ellie Price, who also works for WMBC, joined the team then as the social media and marketing person. During the marketing process, Price said they targeted bikers, music festivalgoers and families, but only had three months to do so and a grant that limited marketing to a 50-mile radius outside Bellingham. 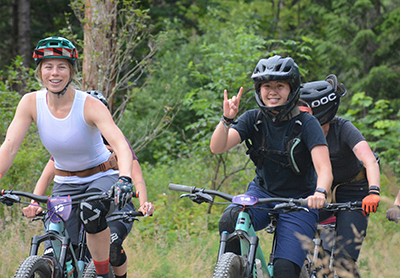 Through surveys done after the event, Price said they received feedback on how some thought the ticket price was too expensive and visitors were confused about logistics, like getting to and from the waterfront and Galbraith. She said some positive feedback was on the festival’s use of the waterfront area and its uniqueness as well as the artist vendors. All feedback will be used to improve next year’s event, she said.

Brown said now that they have a track record with artists, sponsors and the community, they are in a good place for years to come.

“It was definitely one of those years where I feel like we pulled it off in 2022, despite all the uncertainty that happened the year prior with planning,” he said. “So it set us up really well for 2023.”

With the team assembled, a full year of marketing planned and adjustments to be made, Brown said they have dates set for a return next year. He said the festival grounds will be more compact and the schedule will be tighter. All demos will be out of the waterfront, and riders will be shuttled up to Galbraith or Chuckanut mountains. More emphasis will be put on showcasing the local arts community. The stage will be brought in closer to Kulshan’s Trackside Beer Garden. Twilight tickets will be sold for those wishing to see the headliners.

“We feel like year one is under our belt,” Brown said, “and we’re poised for a much more successful event next year.”   x