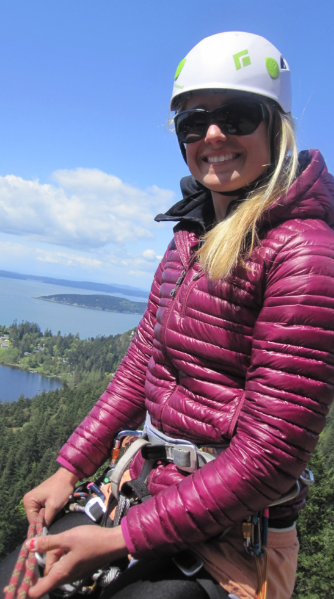 Liz was well known in the skiing and guiding world. She was a sponsored athlete with Patagonia, Jones Snowboards, Julbo, Arcade Belt, Petzl, Karakoram and Eddie Bauer. She was known for completing high-end descents in the Alps and in the Andes, but while she spent a lot of time in Chamonix, France over the last few years, her home range was here in the North Cascades and in the Mt. Baker backcountry. Her high-end local descents included the first female splitboard descent of the Coleman Headwall on Mt. Baker, the northwest couloir on Mt. Shuksan, the north face of the Northwest Ridge on Mt. Adams, and the Kautz Headwall on Mt. Rainier.

I first met Liz in the spring of 2012, when she came to AAI to begin a career in guiding. The first thing I noticed – and the first thing anyone noticed about her – was her smile. She was always smiling, because she was extremely happy with her lifestyle, who she was and her place in the world. The second thing I noticed – and the second thing anyone noticed about her – was that she wasn’t just always happy, she was always stoked. The weather didn’t matter. The conditions didn’t matter. Her client’s or partner’s abilities didn’t matter. She was “perma-stoked.”

Liz’s exceptional attitude earned her a massive following. She regularly posted trip reports on Teton Gravity Research, made films for Epic TV, and had a huge fan base. She had countless friends including people from all walks of life on multiple continents. Her clients – those she led on splitboard and ski trips, as well as those she led on rock and mountaineering trips – adored her.

In an interview with Snow Bunny Magazine, Liz was quoted as saying, “I love the feeling of accomplishment that climbing a mountain and shredding down gives me. It doesn’t get much better than bonding with friends in the mountains, having great conversations, telling jokes, sharing the experience and challenge with your homies and having beers at the end of the day. I think the mountains bring out the best in me and make me feel empowered in all other aspects of my life.”

During one of AAI’s internal guide trainings, I had the opportunity to watch Liz splitboard. Her movement down a 40-plus-degree slope was so clean that watching from a distance, one might think the slope was no harder than a groomed in-bounds blue run.

She was a good climber, an excellent teacher and a great guide, but she was born to ride. The ability to shred a steep line was as central to her existence as breathing. People say they are skiers, or snowboarders, or climbers, but for most, skiing, snowboarding or climbing is just something they do; it’s not truly who they are. Without splitboarding, the Liz we knew wouldn’t exist. Her deep mountain experience, her athleticism and her identity as a splitboarder were at the core of her being.

Late this summer, Liz came bounding into the AAI office, that signature smile painted permanently on her face. “My boyfriend finally asked me to marry him!” Understandably, she wanted to go back to Chamonix, France where he lived to be with him and to – I assume – start planning a wedding. She only had a short window to visit her fiancé before she was slated to do a photo shoot in Patagonia. So I said congratulations and goodbye, expecting to see her in late fall when she returned to the Northwest.

The details of the accident that took Liz’s life are still scarce, but we do know she was descending Cerro Vespignani, a peak near the Argentinean town of El Chalten. Her longtime friends, skier Drew Tabke and snowboarder Chris Coulter accompanied her. The trip also included mountain guide Kent McBride, photographer Chris Figenshau, and filmmaker Nick Kalisz. It has been reported that the avalanche was skier triggered and Liz was washed into a crevasse. None of the other team members were injured.

Two other professional skiers were killed in an unrelated avalanche on the same day that Liz died. Canadian JP Auclair and Swede Andreas Fransson died on a peak in the same range, but some miles away from Cerro Vespignani.

The fact that two avalanches happened on the same day in the same region with so many mountain professionals involved indicates that something very unusual was going on in the snowpack. If there were indicators that something was wrong, nobody recognized them.

As climbers and skiers we all know we are at risk whenever we are in the mountains. And we tell ourselves that it’s worth it; that the mountains make us who we are. Liz was an exceptional person with a huge heart, and the mountains were so much a part of her that she certainly wouldn’t have been who she was without them. But it’s not just the mountains and the risk that make the mountain athlete; it’s the relationships that are made there.

Every person who ever shared a chairlift, a slope or a rope with Liz is better for having known her. She was a bright shining star, and we all miss her. We all miss her terribly.   x