By Ian Ferguson
Photos by Mike and Andy Traslin

In most parts of the world, skiing or snowboarding year-round requires planning, commitment and long-distance travel. Here in Cascadia, an abundance of glaciers and permanent snowfields makes it much easier to build a Turns–All–Year (TAY) streak, a number of consecutive months skied. A respectable TAY streak can even happen by accident.
Mike and Andy Traslin are brothers from North Vancouver who have skied at least once a month for 104 months, going on 105. For them, the streak was not the goal – they just can’t seem to resist the temptation of Mt. Baker’s snowy slopes on the horizon for longer than a month.
“I work construction, and I’ll be working on a roof in the summer and Mt. Baker is right there,” Mike said. “You can see the weather is good and you want to be up there. You think, ‘Should I go this weekend?’”
One summer a June trip led to a July trip, which then led to an August trip, followed by a September trip. Then it was ski season again. The same thing happened the next year, and eventually Andy and Mike realized they had a streak going.
A surprisingly large number of people  ski year-round, and there’s even a website dedicated to trip reports and sharing stories (turns-all-year.com). A sample of community member profiles on the website features year-round skiers from all walks of life, with personal stories of their best and worst trips and how they got started. Tom Szwedko from Colorado had 394 consecutive months as of November 2012. He moved to Colorado in 1980 and hasn’t missed a month since. Other TAY-ers were mountaineers who discovered skis make the descent much more enjoyable.
“Most of the Turns-All-Year people we run into kind of fell into it naturally, like us,” Mike said.
Jason Hummel is a photographer from Tacoma who also happens to be one of the most prolific backcountry skiers in the northwest. He and his twin brother Josh have been streaking since their teens. Assuming they can find some turns, they will have reached the 200-month milestone in June.
“We started before there was a website for it. After we realized we had a pretty long streak going we started keeping a list,” Hummel said.
Skiing year-round stokes the passion for the sport and takes the edge off of waiting for snow to fly.
“You get into October and people are posting on forums, they can’t wait to go skiing, but with turns all year you went skiing no longer than a month ago. It may not have been powder but you got out there, you got some turns. So it helps keep the jones level down,” Andy said.
The Traslins have skied all over the world as professional ski mountaineers, but Baker is one of their favorite destinations. The border crossing is a minor hassle for the North Vancouverites, but the under two-hour drive and the certainty of a long day of skiing make the trip worthwhile.
|“We have a strong connection to Baker because we’ve been skiing here since we were teenagers. There’s not too many places you can look out and see the weather on the mountain, decide to go there and get a 7,000-foot descent,” Andy said.
With the North Cascades, Coast Mountains, Olympics and numerous volcanoes all within reach, the options for ski or snowboard turns all year in the Pacific Northwest are virtually limitless. It’s helpful to have plenty of nearby options, but you still have to get up to
the snowfields.
Lift-accessed glaciers at Whistler and Mt. Hood make it easy to keep the streak alive, but the Hummels and the Traslins are purists, earning their turns the human-powered way. Skis and boots are heavy, and when strapped to a pack they have a tendency to catch on branches.
“There’s going to be some suffering involved,” Andy said. “The bushwhacking – that’s the thing about some of the approaches around here – they’re just gnarly. Super steep, and the trees and shrubs are thick.”
Low-snow years, such as this one, promise longer, more brutal approaches come August and September. Also, procrastination and life in general can force TAY-ers to find turns in less than ideal conditions at the end of the month. The longer the streak, the higher the motivation to keep it going, even if the trip can only be called “fun” once it’s over.
“There are those bad days,” Hummel said. “It’s the last day of the month, it’s raining and cold, the type of day where the last place you want to be is on a mountain. You’re ‘shwhacking’ up some bushes to a tiny, dirty patch of snow thinking, ‘what the hell am I doing?’”
Even sunny days pose their challenges.
“It gets a little funny sometimes,” Mike said. “In North Van, you drive by the beach in August, it’s hot out and everyone’s like, ‘lets go to the beach,’ but it’s the last weekend of the month and you haven’t skied yet … you question if it’s worth it. But it’s kind of addicting. It’s a fine line for sure.”
There are also negative-Nancies who can’t fathom why anyone would carry skis and boots to that tiny, dirty patch of snow in the distance. Regardless of conditions, and despite the heckling, the inevitable conclusion is that the effort always pays off.
“TAY provides that extra motivation to get out there in the mountains on days when you might not go otherwise,” Hummel said. “Plus I can’t let my brother beat my streak.”   x 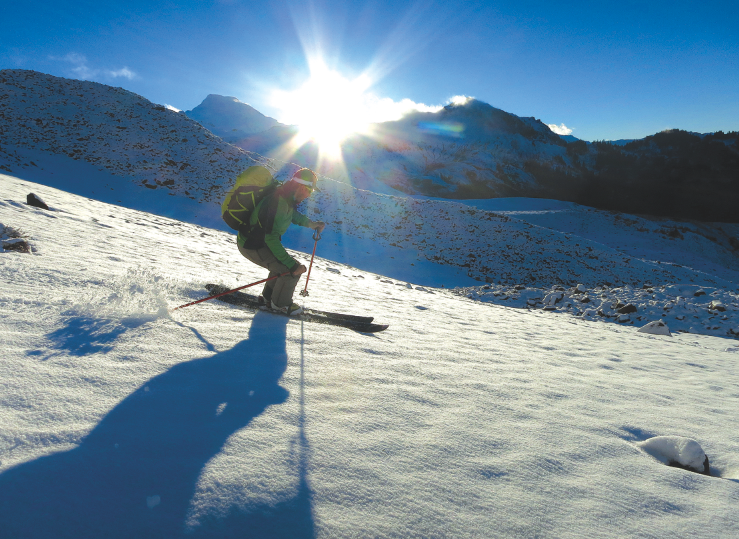