Last month I had the opportunity to guide a team of women on Mt. Baker. We were fast. We were strong. We summited via the Coleman-Deming route in just over five hours.

Back in Bellingham, the mother of two sisters on my team told me it was special to her that her girls got to climb with a female guide. I smiled and told her that I was excited about it too, but I didn’t realize exactly how important it was to me at the time. 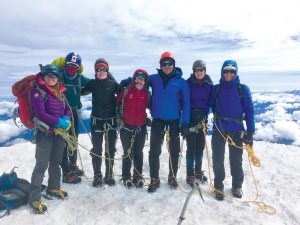 Weeks later I conducted an informal survey and discovered that women make up roughly 20 percent of mountain guides for various companies in the Pacific Northwest. I don’t know why that is, but I think women make excellent guides and there should be more of us out there. Ladies, listen up – if I can do it, so can you.

In my first season, I climbed and learned from my friend and mentor, Jim Thompson, who coauthored the most recent edition of the Mount Erie climbing guidebook. Jim and I climbed nearly every week that summer. He taught me how to belay, sport climb, lead climb, trad climb and eventually took me to Washington Pass to show me what alpine climbing is all about. I was enthralled.

As the summer wore on, I realized what a gift Jim’s mentorship was. Right around that time, I decided that guiding was just about the coolest thing you can do because you get to share this beautiful world with people who might not otherwise experience it. I figured it would take 10 years or more before I could be a guide, but it was always on my mind.

After that first summer of climbing, I returned to Western Washington University to finish my journalism degree. I joined the climbing team, escaped to Squamish and Washington Pass as often as my schedule would allow and wrote about climbing as much as I could.

A few years and countless climbs later, I was living just outside of Smith Rock State Park. I’d left behind a marketing job, a boyfriend, friends and familiarity in Bellingham because I needed more climbing in my life. I befriended several climbing guides and peppered them with questions.

I was working at Redpoint Climbers Supply in Terrebonne, making coffee, pouring beer and selling climbing gear. One lazy November afternoon, a Mountain Madness guide named Niels Meyer passed through the shop. We talked and he eventually left me with his boss’s email to inquire about working for Madness. I thanked him with a huge smile and he walked out the door. Alone in the shop, I did a happy dance and proceeded to text several of my guide friends to tell them about my new lead. I don’t recall whether I fired off the email that day or the next, but it was less than 24 hours after the
conversation.

And then I waited. I heard nothing back for over a month. I sent a follow-up email. This time, I heard back. After a daunting phone call about my relatively short climbing resume, the numerous American Mountain Guide Association certifications I would need and the Wilderness First Responder course I had yet to take, I wasn’t sure if guiding was going to pan out for me.

And then I got an email that said Madness might have something for me that summer. But first I had to get my Wilderness First Responder certification, take a Single Pitch Instructor course and attend the Madness guide training in May, where they’d assess my skills and determine my potential workload. At this point, I knew I stood a chance.

In the days before my Single Pitch Instructor course, I balked. The part of me that felt

like I should have 10 years of experience and 10,000 more climbs under my belt was screaming that I wasn’t ready. When I confessed the feeling to a friend, she told me not to worry, that it was just my inner perfectionist acting out. And she was right. The course went well; I learned a lot and later passed the exam.

And then I balked again. In the days leading up to the Madness guide training, I had this feeling that I was going to totally blow it and that I shouldn’t even bother. But a few close friends wouldn’t let me give up that easily. So I showed up. And once again, it went well.

My hope is that would-be lady guides might see this and see that it’s possible to pursue dreams of working in the mountains. For a long time, I was awed by guiding but never thought I would be able to do it myself. Yet here I am. You can do it too.

Mallorie Estenson loves climbing. She is an alpine guide, writer and resident of Bellingham. While she’s happy climbing in the Cascades, she dreams of someday climbing remote rocks and mountains around the world.